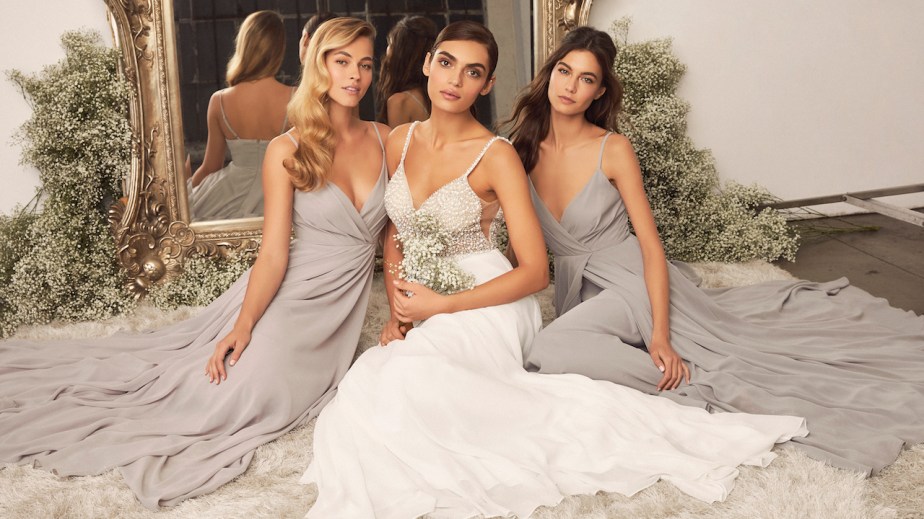 Lulus wants to give fast fashion a better name.

The 23-year-old, California-based fashion company has largely avoided the backlash of fellow trend-chasing brands by taking a data-driven approach to buying. Each of the 50 styles hitting its site daily goes through a rigorous testing process, ensuring it sells.

“We’ve turned the traditional retail model upside-down,” said Colleen Winter, Lulus co-founder and CEO. “We had to be profitable prior to investors, so we created this lean fast-fashion model: We have minimal markdowns, we have short lead times [for production], we’re conservative in everything we do.”

Early this week, after four years of building momentum in the category, Lulus introduced its largest collection of bridal and bridesmaids dresses to date. A new bridal shop features bridesmaids dresses priced $60 to $120, with each color option available in at least four silhouettes, catering to women of different body types and styles. (Lulus plans to test extended sizing starting in the bridesmaid dress category in 2019.) For brides, there are sections for honeymoon, bridal shower and bachelorette party attire, giving them the option to buy a complete bridal wardrobe.

Each style featured on the Lulus site goes through what the company calls a reorder matrix. Before it officially becomes part of the inventory, which involves investment by the company and ramped-up production, it goes through a review process involving millions of data points. (One buying team focuses on trend or emerging styles, and a group of control buyers mines the data and pulls the trigger on furthering investment.) When a small batch of a style is introduced, Lulu taps into customer feedback, considering sales velocity, product reviews by customers, return rates and fit comments paired with returns. Styles are tweaked before they’re rolled out in a bigger way or cut altogether.

“We don’t have a merchandising team building out schematics,” said Britt Nicholls, Lulus’ chief merchandising officer. “We really wait for our customers to tell us what they want, when they want it.”

Recently, Lulus has tested styles in categories including denim, activewear with performance fabrics, lingerie, and “mommy and me” styles for kids, in addition to bridal. As styles prove popular, more in the category are added, until there are enough to warrant promotion and a dedicated section on the site. “We don’t tend to have a lot of fanfare about anything that doesn’t have meticulous testing around it,” said Winter.

In anticipation of rounding out the bridal offerings, Lulus introduced a Bridal Concierge feature on the site late last year, granting complimentary perks to brides-to-be, including sessions with fit experts and stylists, discounts in bridesmaid dresses and the opportunity to put potential dress picks on hold. An Instagram account, @lulusweddings, was launched in June. Aided by promotion on its core Instagram account, it has more than 18,000 followers.

At launch, Lulus teamed with wedding planning site Style Me Pretty for an Instagram-based contest, requiring entrants to follow both brands and also tag them in an engagement photo to win a Lulus shopping spree. Throughout January, the company will share a variety of new video and imagery featuring wedding styles across social channels. It will also feature regular, related posts on its blog, on everything from the ultimate wedding-prep calendar to wedding makeup tutorials. Each will be shared on Pinterest.

“We’ve become very good at digital strategy. Our marketing is a well-oiled machine, and we’re able to attract the traffic we want,” said Winter. She noted the company goes light on performance marketing, in favor of producing content likely to go viral and paring organic leads with Google product listing ads. “We’re hanging out where our customers hang out, hitting them at all angles,” she said.

Additional bridal styles will roll out in April and August. The company doesn’t have revenue targets around such campaigns and launches, but it plans to start implementing them this year.

Winter and her mother, Debra Cannon, first started Lulus as a vintage boutique with an investment of just $10,000. They eventually evolved the concept and opened several stores near their home base of Chico, California, using MySpace to build awareness and taking orders by phone. They launched an e-commerce site in 2005 and sold their stores three years later. “At this point, we consider ourselves digitally native,” said Winter. “We really grew up online.”

Lulus considers itself an affordable luxury brand, rather than a fast-fashion brand, as fast fashion and disposable fashion are widely considered one and the same. Winters said the company prioritizes quality, unique details and “chic” packaging, and at the same time caters to the Instagram generation, enamored with chic decor, travel and great food. “That life is expensive,” she said.

Ninety percent of styles on lulus.com are exclusive to the site. Lulus also sells through Nordstrom and just inked a deal with a second, yet-to-be-announced wholesale partner. Rather than in-house designers, it has product developers who work with Lulus buyers and their go-to vendors (all located in downtown Los Angeles) to fine-tune styles for the Lulus shopper. In addition, it employs a fit tech and production team — the latter manages what what’s feasible in terms of features for the price point and focuses on keeping the brand fashion-forward. In total, Lulus has 750 to 900 employees, depending on the season.

In May, Lulus secured a $120 million round of funding from IVP and Canada Pension Plan Investment Board. IVP’s portfolio includes Glossier, The Honest Co and Twitter. In 2004, the company completed a round of financing with H.I.G. Growth Partners, which has remained an investor. The company declined to share revenue figures but described its growth as massive. Its latest Black Friday sales were 30 percent higher than in 2017.

In an effort to bring back the personal shopping experience from its early days, Lulus recently added a customer relationship manager to its customer service team and built out its team of fit experts and stylists. For those who’d rather not receive assistance, it offers up recommendations based on searches and past purchases. Customer review photos are also on each product page and can be filtered by features like body type. While Lulus has no immediate plans to open permanent stores again, a number of pop-ups are in the plans for 2019.

Also this year, having recently broken ties with its third-party logistics partner — realizing the company can be more efficient working solo — Lulus is set to open its own distribution facility by the fourth quarter. It has a goal of offering two-day shipping for all U.S. customers.