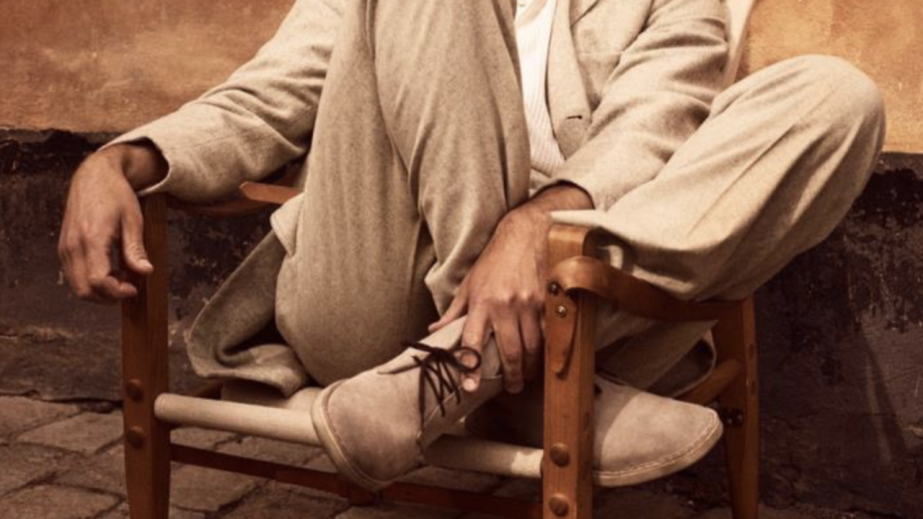 ‘We’re trying to dial it up’: Inside Clarks’ largest marketing campaign to date

Clarks, the British brand known primarily for its boots, has mostly been quiet on the advertising front for the past 10 years. Despite being sold in 35 countries and routinely being listed as one of the top-selling men’s footwear brands at wholesale, the company has not made advertising a major priority. But it’s now rethinking that approach: On Monday, the brand launched its most widespread — and expensive — campaign to date, along with a significant shift in marketing strategy.

The global campaign starring Alexander Skarsgård and Frieda Pinto rolled out across all of the brand’s advertising channels, including social media, print magazines, billboards and email. Unique imagery and copy were created for each channel. It also hit all of the brand’s markets across Europe, Asia and North America.

“This definitely marks a new approach for us,”  said Tara McRae, chief marketing officer at Clarks. “We’ve been supporting the brand with smaller campaigns here and there, but this is the first time in recent history where everything has really joined up. We’ve tended to be much quieter as a brand in recent times, so we’re trying to dial it up.”

Previously, the brand’s marketing efforts were split among its many markets — Europe was separate from Asia, which was separate from the U.S. — and that there was little overlap. Regional teams produced smaller campaigns for different markets, with individual budgets to work with and focused mainly on digital channels.

“We had historically done campaigns that focused on a couple different mediums,” McRae said. “We’ve focused a lot on digital recently. This is the first time we are using celebrity ambassadors and going at it from a full, 360-degree angle. Digital is obviously big now, and video — those pieces pull [this campaign] together, but we’re also doing print and out-of-home in all of our major markets.”

“We’re absolutely looking for new audiences,” McRae said. “It’s like with our collaborations. Those bring in a lot of new people. I mean, it’s remarkable how many new customers come through collaborations, especially from the younger generation.” Clarks has been slowly accruing a new audience in the streetwear crowd, thanks to collaborations with brands and designers like Beams and Supreme.

Back in April, Clarks laid some of the foundation for this move when it revamped its email marketing strategy. At the time, Rich Almeida, vp of e-commerce and digital at Clarks, said that a big motivator of the email upgrade was ensuring campaigns could scale up in a more efficient way.

“A unified marketing campaign is a smart strategy for Clarks,” said David Naumann, vp of retail marketing at enVista. “Offering a consistent campaign across all marketing channels reinforces the messaging and is the most effective way to inspire consumers to act. When consumers see the same messaging multiple times and in multiple mediums, it becomes much more impactful, and it is a great way to increase brand awareness. Integrated marketing trumps fragmented marketing.”

But a big investment like this has its risks, not least of which is cost — A-list celebrity ambassadors don’t come cheap. (Clarks declined to specify its spend on the campaign.) Clarks took another big gamble last year when it opened an ambitious, state-of-the-art factory in England, which was supposed to be responsible for more than half of the brand’s 600,000 annually produced desert boots. The factory failed to live up to the brand’s expectations and was unceremoniously shut down earlier this year.

“Within a company, different marketing channels are often siloed, but the consumer only sees one brand, so having a strong, clear brand identity across channels will go further to make a retailer stand out from the customer’s perspective,” said Corey Pierson, CEO of Custora. “But it’s also a balancing act, because not all of their customers have the same preferences, so they have to be careful that their unified message doesn’t turn off any key segments. It can be hard to pull off, but even the initiative itself is notable, since it’s so rare to see a company align internally around a consideration of how the customers see things.”

With lofty goals comes lofty expectations, but McRae is confident that this is a gamble that will succeed. Depending on how well this new strategy takes, Clarks may have a very different approach to global advertising going forward.

“In this day and age of marketing, everyone’s talking about ROI,” McRae said. “This is definitely an increased investment. It’s all of the resources of our lower-level campaigns around the world all pooled into one, and with that comes some very clear global metrics [like reach, traffic and sales] to tell if it’s a success.”