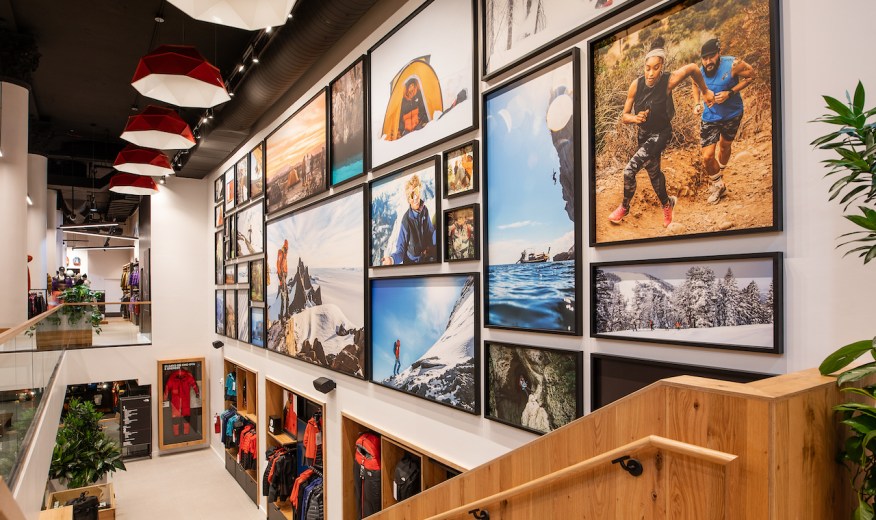 The North Face wants to build outs its community of customers, and it all comes down a new physical retail strategy.

On Friday, The North Face opened its new 8,000-square-foot store in NYC’s SoHo neighborhood. The brand aims to overhaul most of its 100-plus locations worldwide by 2024, starting with its Seattle and Cherry Hills, New Jersey stores in the coming weeks, followed by some of its stores in Europe.

The move comes at a time when retailers are facing increasing competition from direct-to-consumer brands and are looking for fresh ways to drive shoppers to stores.

“E-commerce sales continue to grow faster than in-store sales, even though in store sales are still growing,” said Mark Mathews, vp of research development and industry analysis at the National Retail Federation. “E-commerce is expensive, and so you want to incentivize people to come into the store. Retailers are investing in making that experience different, and they are looking at physical stores through a different lens. It’s not just about selling things anymore; they’re thinking about the store in a completely different way.”

The decision to overhaul the brand’s retail locations came about two years ago. After talking to customers in stores and via customer surveys, learning what they loved about The North Face and what could be improved, the brand decided to rethink how it engages with customers in store.

Where old stores may have felt cramped and a little dark, and focused on selling products, the new stores are aimed to be more open, bright and encourage exploration. They’re also built with all sustainable materials.

When customers walk into the SoHo store, they’re greeted by five of the brand’s six “icon” items, or hero products: The Base camp Duffel, the Nuptse jacket, the Denali jacket, the Mountain jacket and the Himalayan suit. The sixth item, the Two-Meter Dome tent, is pictured but not featured in the store because of its size.

Scattered around the store, the brand has also included some of its products that have been used by the brand’s explorers (climbers, skiers and runners who serve as brand ambassadors) on past adventures. Paired with them are little bios about the explorer, and often handwritten notes about their trip or the North Face product they took with them. Parker said the idea is to encourage people to spend more time in the store and engage with the company’s history.

“For a while now, we’ve had some really great omnichannel services, but we haven’t really been very overt about it,” said Parker.

Each store will have a specific area by the cash wrap set up for buy-online, pick-up in-store orders, as well as a meeting place for personal outfitting or styling sessions. The store also offers local delivery and community events, including a collaborative series with company Mappy Hour designed to help customers plan outdoor adventures. There are also spaces to recycle old, worn products that the brand can then use as part of its Clothes the Loop partnership donating used clothes to non-profit partner Soles4Souls.

At the back of the store, the brand has an area called The Campfire, where shoppers can sit, relax, and watch on a TV some of the brand’s recent advertising campaigns or adventures its explorers have captured on film.

“This area was developed not just to share stories, but also to share how we can plan our stories. In each of our stores, we want to connect to local communities through our team,” Parker said. Each store, not just those with the new global retail concept, has a local guidebook in the Campfire area where store employees, or guides, list some of their favorite local places for hiking, skiing and climbing.