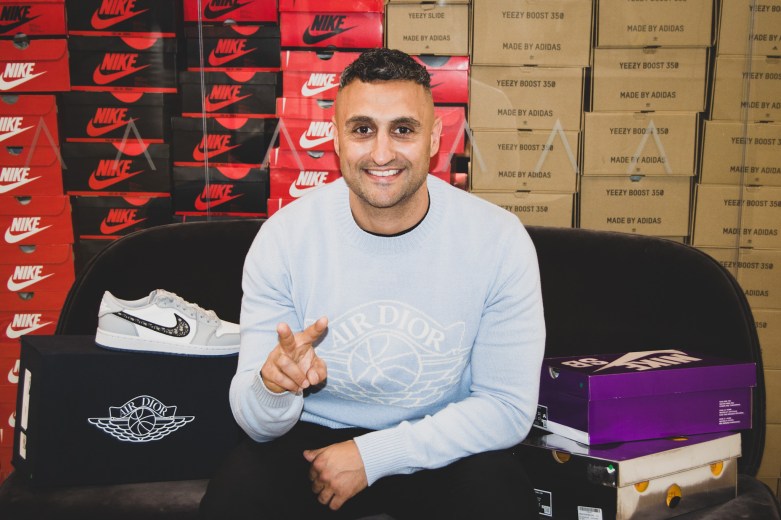 The Edit LDN founder Moses Rashid: Buying and selling sneakers for a profit is becoming ‘a bigger challenge’

Sneaker resale has become one of the biggest investment opportunities for those with know-how, and The Edit LDN is sourcing the most popular and rarest of the lot.

Self-anointed “Farfetch of sneakers,” the London-based platform was launched by former consultant Moses Rashid with the name The Edit Man London in January 2020. Rashid changed the name to The Edit LDN later that year. He originally built the platform to personally gain access to limited and “hype” sneakers quickly, he admitted. “We dropped the ‘man’ part of our name because we realized there are a lot of female consumers here,” he said. The Edit LDN’s sales grew 450% from year one to year two, superseding all of its targets, from conversion rates to return customer rates. It is one of the biggest local reselling platforms.

In October of 2021, the company launched an ongoing partnership with Harrods on the retailer’s first-ever boutique for limited-edition sneakers. Managed by British footwear retailer Kurt Geiger, the Harrods store carries brands like Yeezy, Jordan, Dior, Off-White and Supreme, plus it offers personal shopping services for customers wanting a specific model.

As the sneaker space expands and becomes the prime target for fashion purchase “assets” that can accrue in value and be resold for a premium, platforms like The Edit LDN are poised for growth. Rashid spoke with Glossy about The Edit LDN’s global expansion plans, the shoe models set to be big in 2022 and the company’s next plans with Harrods. The below conversation has been condensed and edited for clarity.

What do you think that a partnership with a department store can bring to a sneaker resale business?
“Physical retail wasn’t something that was actually on our roadmap at all. They saw an alignment within sneaker resale being high-end within their space. Consciously, we’re not the cheapest, but we’re very much focused on quality and speed of service. After a few conversations [with them], we then created a 2,000-square-foot space. We’ve had huge success, going three-times over our target in month one, plus we were on-boarded to both the women’s and the kids’ floors. We’re seeing a huge uptake in hype product. And, obviously, there are also those really rare pieces that you just can’t find anywhere else. So, together, we’re creating a destination to find a little something for everyone, with some of the coolest products.”

What’s next in your partnership?
“We’ve got a content series coming out in March, shooting [videos] with rappers and musical artists in the 2,000-square-foot space that we have. There will be conversations around their music and around sneakers. We will be looking at how to build The Edit LDN community in a way that’s in line with the Harrods customer, and that will be amplified on our social media channels.”

How do you think customer demand will evolve in the next year?
“The customer is obviously becoming savvier, so pricing is important, as the customer knows what they want, for the most part. If you look at the market itself, in 2019, the secondary sneaker resale market was worth $6 billion. In 2030, it’s going to be $30 billion. The consumer approaches the market in two ways: They purchase a product to wear, like I do, or they purchase to invest, because they know that if they buy this Yeezy or Jordan today, the value of that product will go up over time, like an asset. The demand is going to be even higher, as the supply isn’t going to be there to keep up with it [the market growth]. Fast delivery is really critical within this space, and we are working to reduce that from 1-5 days to even quicker. The reality is that by the time you get [an order] in six weeks from StockX, there will be another five or six other drops you’ve probably already bought. As the market becomes slightly more accessible and evolves, then being able to understand what is an investment piece, and buying that at the right price to make a profit down the line, is becoming a bigger challenge. That’s where it comes down to knowing your stuff.” (According to their site, Stock X “strives to complete all orders within 7-12 business days.”)

How will sneaker economics shake out in 2022?
“2022 will be quite an exciting year. Last year was very much the year of the Nike Dunk. Next, we will see collaborations and older model reruns. We’ve already seen it with the classic Nike Air Force One, where they did collaborations with the likes of Supreme and Clot. And I think we’re just going to see more of that come through in 2022. Sneakers are very much a unicorn market. There’s a huge rise of the female sneakerhead. Over the last 12-18 months, the New Balance 550 has become one of the hottest properties right now, especially in female sizing. Women buy differently, with more frequent purchases under £300 ($400), but it’ll be men that will buy ‘grails,’ or those products that are valued between £600-1200 ($800-$1600). This year, there’s going to be a huge push within the UAE, specifically emerging markets like Saudi Arabia and Qatar. There’ll also be a bigger push into the U.S. to cover those four key places — L.A., New York, Miami, San Francisco — and then a push into Singapore, Indonesia and China.