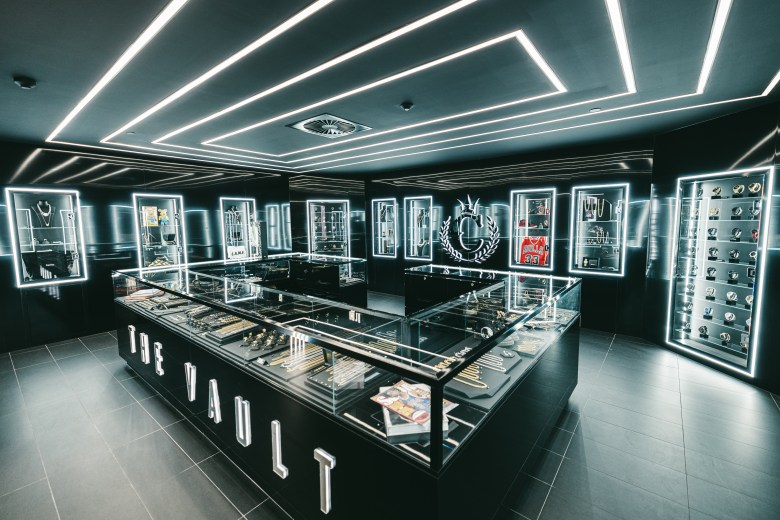 Streetwear retailer Culture Kings opened an experiential, 14,000-square-foot store in Caesars on the Las Vegas Strip on Saturday. The 14-year-old, Australia-based company, which earned nearly $200 million in 2021 revenue, is prioritizing a “retail-tainment” approach to physical retail.

The Las Vegas store mimics Culture Kings’ existing stores in Australia, with its recording studio for musical artists, 75-foot hat wall and daily live DJ performances. It also houses a Secret Room featuring the most sought-after items on the streetwear market. Other in-store features include an arcade and a half basketball court featuring a sharpshooter challenge.

“This will be the second installment of our Secret Room, which is a relatively new feature we introduced last year in our Auckland store,” said Tahnee Beard, Culture Kings’ co-founder and COO. “It features one-of-one, limited-edition products you can’t access in any other stores or online. To enter, you will need to uncover a hidden passcode, which will take you to a room of mirrors before you enter.”

There’s also a premium jewelry space within all of the company’s stores dubbed The Vault.

Immersive retail approaches have become more common as more brands engage in the metaverse and invest in in-store digital experiences, though streetwear retailers are still lagging behind.

“It has always been a goal for us to open our first store in the U.S. with a bang and create a theater,” said Simon Beard, CEO and founder of Culture Kings.“We really want to set the new standard for retail with this store. We’ve always believed retail had such a broken model. [It doesn’t make sense to] have a little store with a small range and then, 20 minutes away, have another store with the same range and one person working in it.”

Culture Kings’ core shopper base is Gen Zers and millennials, evenly split between male and female shoppers. Its celebrity clientele include Drake, A$ap Rocky and Kehlani. The brand started with one store on the Gold Coast in Australia and has since opened an average of one new store per year. It was self-funded ahead of its IPO in September 2021.

“Our consumers don’t go shopping every weekend, but if you get them in the right state of mind with the store experience, they just come alive,” said Simon Beard. “We design our stores for those moments to happen. I’ve always thought of Las Vegas as this rite of pass. age for our target market — the young male customer coming to the city for their 21st birthday or their bachelor party or for a convention. We want to immerse them in that theater and feeling of a true brand experience, and then [earn their business] online.”

The store is stocked with more than 18 collaborations by Culture Kings, including with international brands Carré, GOAT Crew and Saint Morta. Styles from 60 other brands are exclusive to the store.

“Some of the more established sneaker retailers were given such an easy ride by these amazing brands,” said Simon Beard. “All they had to do was put a sneaker on a shelf to sell it, meaning they didn’t grow that muscle of creating value in the value chain, which is what we have always been focused on. Whatever allocation of shoes we get, we will blitz through that and deliver massive value to the brand. We never want to rest on our laurels. We have to create that value, because otherwise [brands] will just sell their shoes direct-to-consumer.”

The company plans to open additional experiential stores in key U.S. cities, though the founders declined to share details.

In September 2021, brand accelerator A.k.a Brands — which owns Culture Kings, as well as fast-fashion brands Princess Polly and RebDolls — reportedly raised $110 million in its IPO. It priced 10 million shares at $11 each, downsizing from its initial plan to offer 13.9 million shares priced $17 -$19 a share. The downgrade came down to market performance the week prior.