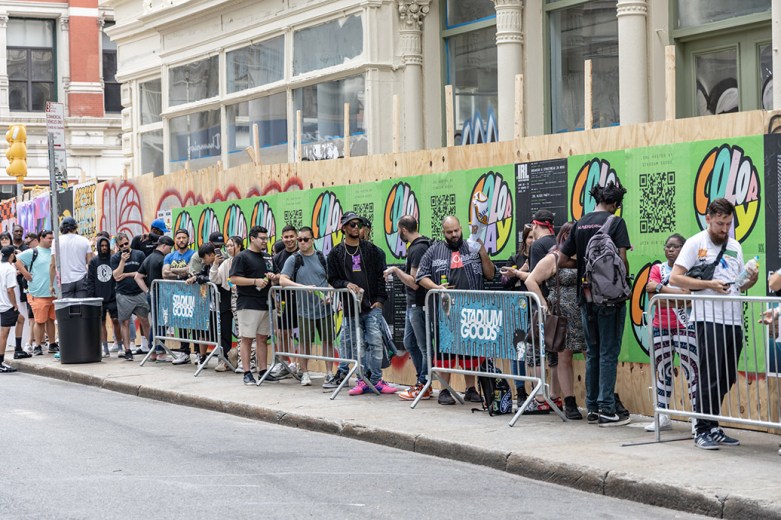 Stadium Goods on how to launch a web3 brand event

Neha Dayal, director of innovation strategy at Stadium Goods, discussed with Glossy what worked and what learnings the event provided that other brands should consider.

What makes the Stadium Goods consumer an ideal target for web3 events?

“Our audience is a group of individuals at the forefront of a lot of innovative technology. They’re the first to explore, test, learn and experiment, which is very similar to how we approach things at Stadium Goods. That very specific and intentional design work was something that our community recognized, especially with that first iteration of PFPs that really took off. Accessibility and collectability are huge pieces of what make every culture big.

Those are the three big things about sneaker culture: You buy one to wear, one to trade and one to collect. A lot of those web3 things overlapped with this culture, the biggest of which was just understanding the economics of how an aftermarket can work. That can be tricky to digest as consignment becomes a lot bigger. Thinking about the dynamics of the resale market, there are a lot of apples-to-apples correlations with sneakers and with trading NFTs.”

Why did you put on your event during NFT.NYC rather than a standalone event?

“We were a bit unclear as to what the energy was going to be. But we were very determined in the environment we were trying to create, which was more about the intersection with streetwear, sneakers, web3 and the creators themselves. It was one way to engage with our community directly, specifically at this intersection of sneakers and web3. But also, it was a great moment for us to start experimenting with these pieces of tech in a forgiving environment. Our audience rewards and puts a premium on experimentation and trying something to see what the company can learn from it.

We wanted to be able to speak directly to the people in the space and understand, not just from articles, but from the people actually creating, buying and flipping all their PFPs and other great projects. We got to play with tech, like token gating, and we launched crypto payments in our store that same week. We also experimented with POAP’s, which are proof of attendance protocols.”

What can brands learn from your experience at the event?

“What struck true with us from conversations with the attendees was that there’s a way to do web3 authentically. From the consumer side, looking in, it makes sense for Stadium Goods to be posting these creators, like Verbal from Ambush or Jeff Staple. They truly were sneaker lovers, and they transitioned themselves into this world very successfully. Given everything else going on within the crypto world, the energy and optimism for what’s next was super palpable. Everybody was just talking about what’s next.

What worked the best was token gating. One of the bigger rewards of being a part of these communities is the exclusive access to things. The part that really rang true with a lot of the consumers was that, to actually get through a token gate, you do have to flash what community you belong to, even through checkpoint apps like Token Proof. It’s a physical extension of this online world. It’s almost like pulling out an Amex or a Black card: Here’s my community, let me in.”