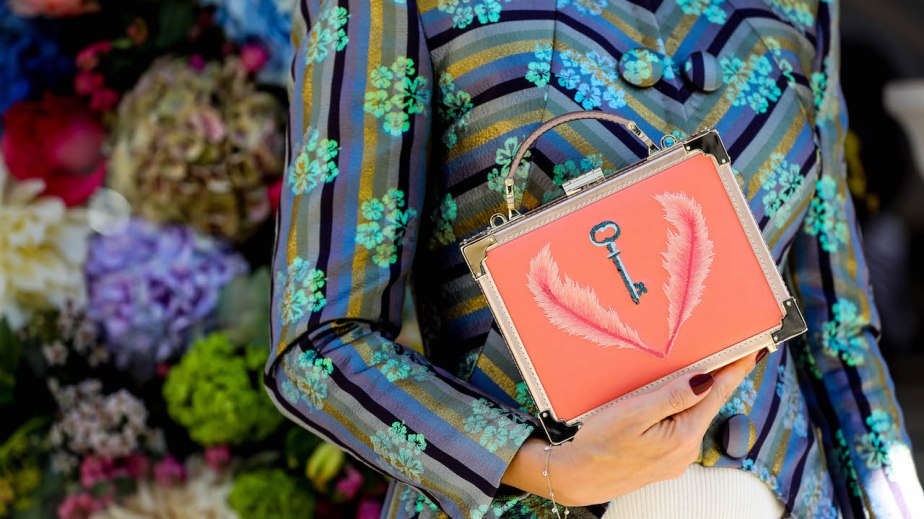 With couture designer Giles Deacon newly at the helm, Aspinal of London is the latest British brand making a big push into the U.S. market.

The luxury leather goods company, launched in 2000, has gained notoriety in recent years as a favorite brand of Kate Middleton, who’s regularly photographed carrying its handbags. Giles Deacon, whose extensive fashion resume includes designing Pippa Middleton’s dress for her 2017 wedding, joined the company in mid-October as design director. Barneys bought into the brand at the time and will exclusively kick off sales of the collection in stores and on its site on Tuesday, marking Aspinal’s official entry into the U.S. market.

“We’re just dipping our toes in the water with Barneys,” said company founder Iain Burton, noting Aspinal’s vast physical presence in London of 10 stores, including a flagship opened in December — it also sells at Harrods and Selfridges.“It’s just the beginning of our U.S. journey. We will get a flagship store in New York as soon as we possibly can.”

He also called out the brand’s affordability: Prices are significantly lower than that of other premium European houses, which should play well in the comparatively price-conscious U.S. market. (A “new arrival” tote on the site is marked $500, a satchel is $725.)

The U.S. concentration comes at a time of great growth and transition for Aspinal of London, which reported a 24 percent boost in annual revenue to $39.6 million in March 2017. Earlier that year, Burton sold a 20 percent stake in the company to U.K.-based Four Seasons Ventures, with plans to use the investment to expand the company to the Middle East and throughout the U.K. In September of 2017, Lisa Montague, formerly CEO of Loewe and Mulberry, was brought on as chief operating officer.

Currently, in addition to the U.S., Aspinal has its sights set on Asia, with focus on China and Japan, as well as the Middle East, where it’s built five stores in the past five years, including in the Dubai Mall in July.

Barneys has a long history of introducing luxury brands, both local and international, to the U.S. market, often on an exclusive basis for a set period of time. In March, Italian denim line Forte Couture emerged in store and online, and in July, makeup artist Gucci Westman’s Westman Atelier makeup line was introduced as as exclusive. After fellow leather goods brand Mark Cross relaunched at Barneys in 2012, it was sold exclusively through the retailer in the U.S. for more than four years.

“Barneys has always been a ‘laboratory’ in introducing new brands within the marketplace,” said Sarah Blair, Barneys’ head of women’s accessories. “And exclusives enable a distinct point of view and differentiation amongst competitors, driving the client to the Barneys’ experience — our customer seeks and expects to discover collections of beautiful craftsmanship and design not found everywhere.”

Deacon has been concentrating on couture since 2016, post helming namesake ready-to-wear line Giles from 2003 to 2016 and serving as creative director of French fashion house Ungaro from 2010 to 2011. Where he will take Aspinal in terms of design remains to be seen, but the designer — known for big-impact pieces, often with wild prints and pop-culture references — said he has no intention to make sweeping changes as he was not brought on to save the brand, which is often the case with new design leads at luxury houses. “It’s not a label that’s really tired or going bad,” he said. “Its direction and aesthetic are established — I’m just here to add to it.”

He said a lot of elements in his couture work figures in Aspinal designs — for instance, his debut collection features his illustrations of a diverse array of what he calls “Giles-Aspinal crossover women in nice frocks.” He said he has a number of clients in New York he was thinking about when designing the collection, pre-hire. The Hepburn style, in particular, has “some substantialness to it” that’s perfect for the Upper East Sider.

Blair said storytelling will be Barneys’ focus in marketing the launch — Aspinal’s take on modern English elegance will be shared in holiday mailers, on social media, through store associates and on its editorial site, The Window, among other channels. It will also be hosting a press event featuring Deacon on Tuesday. Aspinal, for its part, will be hyping the launch through digital marketing — but Burton said he’s a big believer in word-of-mouth, as it’s worked wonders for the brand to date.

“Word of mouth is the biggest marketing tool you can have; it’s everything,” he said. “You show people the product, it’s beautiful — then it takes off. Well, that’s how it works in the U.K.”