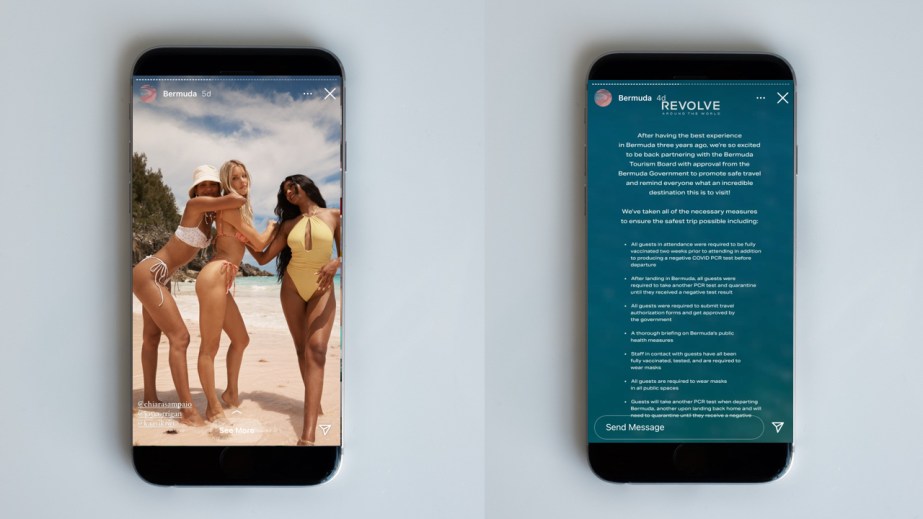 In pre-Covid-19 times, a tropical yacht party with models and influencers would have resulted in glamorous pictures, social media engagement and not much else. But during the ongoing pandemic, such an event has sparked a police investigation and criticisms from Bermuda’s Premier and Ministry of National Security.

As U.S. vaccination rates rise and new Covid-19 cases have declined, American fashion and beauty brands have begun to host their first influencer trips since early March 2020. But it’s not all smooth sailing yet. Over the past week, e-tailer Revolve has been in Bermuda, hosting its second international trip since the pandemic began, following a Turks & Caicos trip it hosted in May. Although the company obtained permits to host various events on the trip, a boat party featuring a concert by musical artist Shaggy has become a flashpoint in local politics — especially since local residents are still subject to tight pandemic restrictions.

After videos of the boat performance by Shaggy appeared on Instagram, Bermuda’s Premier, David Burt, posted a tweet on June 9 discussing the appearance of an “illegal raft-up” (a boat tied to another boat) in the video. The Ministry of National Security released a statement explaining that Revolve had received permission for the party, but said there were “clear law violations” regarding the ban on raft-ups. Bermuda’s Minister of National Security, Renée Ming, stated that images of the concert on social media were “very concerning and extremely disappointing.”

The images of what appears to be an illegal raft-up are not in compliance with the laws of Bermuda as raft-ups are not permitted. I have asked the Minister of National Security to liaise with the Bermuda Police Service on this matter.

According to an emailed statement from Revolve, the e-tailer and the organizing production company Dasfete “were aware that recreational raft-ups are currently not allowed to take place and adhered to all rules, regulations, and safety measures put in place by The Minister of National Security’s office.” It added that “Marine Police were present throughout the day and no Covid breaches were raised when visiting the location and taking the information regarding our exemption. The two boats were strategically staged only during the performance, for atmospheric marketing purposes, and no guests were allowed on the boats to avoid contact with those boat operators (who were also either vaccinated or tested within three days prior to the event).” In the video, the boat attached to the main boat does not appear to have people on it. Dasfete also released a statement saying that it had complied with regulations and was cooperating with authorities.

The news sparked a range of reactions from Bermudians.

Shiona Turini, who is from Bermuda and is the costume designer for HBO show “Insecure,” commented on her Instagram Stories, “I am trying to understand Revolve hosting a press trip on a 21-mile island with one hospital during a pandemic when the locals are subjected to a range of restrictions that do not seem to be honored or required here.” She added that she felt it showed a “lack of social responsibility and complete disregard for other cultures and communities,” and recommended that participants in the event donate to local non-profits. She could not be reached for additional comment.

Revolve stated that it will be donating $20,000 to the Woman’s Resource Centre in Bermuda and will also be donating clothing to the girl’s home in Bermuda’s Department of Child & Family Services.

Meanwhile, a Bermuda-based business group of event organizers responded to the incident by expressing frustration with the government for awarding exemptions to foreign companies but not local businesses. The incident has also sparked op-eds and statements by the Premier’s political opponents criticizing the favoritism of foreign businesses.

Revolve received large group exemptions from the authorities for permission to hold the trip, requiring all guests and contractors to be fully vaccinated and PCR tested before attending. An estimated 58.6% of Bermuda’s population is vaccinated, as of June 14, according to Reuters.

Throughout the pandemic, U.S. influencers sparked outrage on social media when they blatantly dismissed pandemic rules, to party. Even as brands make efforts to demonstrate they are following regulations and the pandemic situation improves, the influencer trip remains fraught. Bermuda’s Covid-19 risk was recently improved to “moderate” by the CDC, with one new case in the past three days. But the visuals of Americans coming in to host parties not allowed for Bermuda’s citizens provoked frustration.

In response to the reactions, model and attendee SouKeyna Diouf posted a statement on her social channels addressed to the people of Bermuda, stating, “I’ve been made aware of the impact of the pandemic on your country and hope the time spent hasn’t offended anyone.”

The Bermuda Tourism Authority had also provided support and guidance to Revolve and created a social media agreement with the company to promote Bermuda as a tourism destination. In response to the event, the Authority released a statement saying, “Unfortunately, there may have been a breach of approved protocols” and that it was awaiting the outcome of the police investigation.