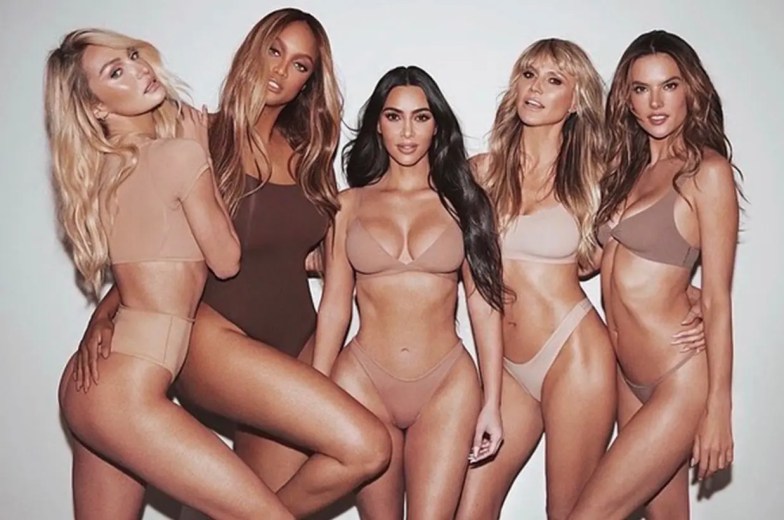 Why ’90s supermodels are dominating the latest fashion campaigns

With Skims debuting an A-list roster of iconic ex-Victoria’s Secret models for its new Skims’ Fits Everybody collection campaign and Helena Christensen headlining a collection for Karen Millen, ’90s supermodels are seemingly back on top.

Nineties-era models like Kate Moss, Naomi Campbell and Amber Valletta, alongside other supermodels like Tyra Banks and Heidi Klum, are once again the focus of fashion campaigns. Their return reflects the mood of the moment, while also raising questions about the progress of the body positivity movement.

The Skims’ Fits Everybody collection campaign features Tyra Banks, Heidi Klum, Alessandra Ambrosio and Candice Swanepoel. The models came together for the first time since being Victoria’s Secret Angels at different points in the brand’s history. According to the Skims press release, owner Kim Kardashian selected all four household names to star in the campaign, with an aim of “showcasing the models’ strength, energy and everlasting allure with imagery reflecting the group’s enduring legacies.”

The reach of the ’90s models typically exceeds that of younger fashion models, as they’ve had years to tackle projects in other industries. For example, Amber Valletta is an ambassador for FIT. Naomi Campbell has 12.3 million followers on Instagram, while Adut Akech has 1.7 million. This may be why featuring them in campaigns is such an easy marketing decision for brands: They are well-recognized as icons across markets beyond fashion.

In February, denim brand DL1961 featured Candice Swanepoel in the campaign for its collaboration with Recover, a material science company that facilitated the creation of lower impact denim.

Swanepoel said she wanted to work with DL1961 as the brand speaks to her values, in being a female-founded brand that prioritizes sustainability. Swanepoel also has a brand, swimwear line Tropic of C. Swanepoel did not have an active role in designing DL1961 garments.

Sarah Ahmed, co-founder and chief creative officer of the denim brand DL1961 said, “The [classic] images of Candice [Swanepoel] off-duty always stuck in my mind. She knows how to wear denim. Candice has a magnetism stemming from her role as a mother, an entrepreneur, a fashion icon and the many other hats she wears. It all translates into the effortless way she wears her jeans. It’s exactly what we want to embody as a brand, and people gravitate toward that.”

Ahmed said the resurgence of models from the ’90s and ’00s is a sign of a wider shift, as those decades were all about pushing cultural boundaries. “After spending two years at home and being more reserved, that [era’s] rebellious spirit has an allure,” she said. “Images from that era, from the subculture street style to the mainstream fashion, are making a resurgence because they act as a guide for those who want a little taste of what that era was about.”

In addition, she said, the rise of vintage fashion has made looks from those eras a lot more accessible. “People are drawn not only to that nostalgic look, but also to the models who defined that style,” she said.

For the brand’s “Icons” capsule collection, released this week, U.K.-based womenswear brand Karen Millen chose to team with supermodel Helena Christensen. In a statement, Jane Eskriett, managing director at Karen Millen, said, “When it comes to fashion icons, Helena is at the top of the list. Her iconic style speaks perfectly to the Karen Millen heritage.”

A spokesperson for the brand explained why the 53-year-old supermodel was the perfect choice for the campaign in an Instagram caption, writing, “Embodying the decade’s daring silhouettes, beauty, confidence and influence, @helenachristensen has left an untouchable legacy synonymous with ’90s fashion, one which constantly reappears and remains relevant today. Celebrating the era in the utmost style, THE ICONS offers a forward-thinking take on nostalgia.”

Helena Christensen and Naomi Campbell were part of the original group of supermodels that achieved longstanding icon status in the 1980s, along with Linda Evangelista, Cindy Crawford, Christy Turlington and Claudia Schiffer. All six helped define ’90s style, which is seeing a resurgence today. In a press statement, Christensen said, “I started working in the fashion business in the ’90s, when there was a lot of big hair, fake eyelashes and super cool music. It was just a great time in most people’s lives.” Her work with the Karen Millen is meant to be a one-off collection.

Victoria’s Secret has gone through numerous changes and a rebrand in recent years. In 2019, Victoria’s Secret was caught in a financial controversy between Leslie Wexner, the billionaire founder of parent company L Brands, and Jeffrey Epstein. And for years, it’s faced backlash for its persistent lack of body inclusivity. Wexner stepped down in March 2021, and the brand has since launched a variety of inclusive initiatives, including selling maternity bras for the first time. In June last year, it launched the VS Collective, a more inclusive update on the VS Angels initative, with body-positive role models like plus-size model Paloma Elsesser and footballer Megan Rapinoe. Additionally, the brand has expanded its size range and added larger-sized mannequins to its stores.

Skims, and other newer brands, already offer size inclusivity in their product range. And the question remains whether brands’ inclusion of original supermodels with slim body types in new campaigns will work to boost brand image or bring on criticism. Across social media, the overwhelming majority of responses to Skims’ latest campaign have been positive.

Beauty brands are leveraging OG supermodels, as well. For example, Kate Moss and Twiggy starred in the launch of luxury makeup brand Charlotte Tilbury’s new Pillow Talk campaign earlier this month. This may indicate that marketers are falling back on proven strategies for influencing consumers, at a time when tackling new strategies poses a risk.