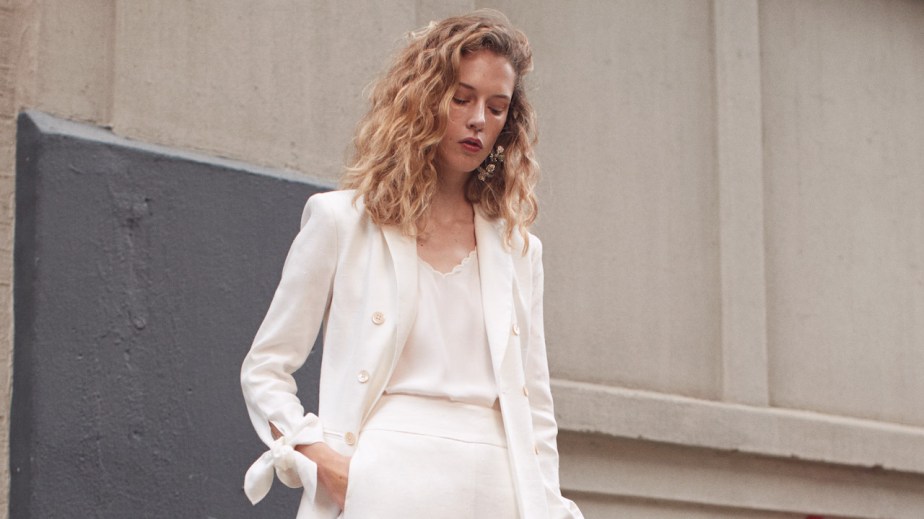 Rebecca Taylor is launching workwear to get around wholesale buyers

Rebecca Taylor is turning getting dressed into a paint-by-numbers game, rolling out collections for every dress code.

“I’m always thinking about our customers’ needs and what she’s looking for,” said Rebecca Taylor. “I want to give her options across the board, so she doesn’t feel like she needs to go to another designer.”

Workwear is not new for the brand; suiting was core to its seasonal collections in the early 2000s, said Taylor, but the brand moved away from it, largely in response to the buying habits of wholesale partners. (Like many brands, Rebecca Taylor is ramping up its direct-to-consumer sales; the current wholesale-DTC sales breakdown in 70-30.) As the industry moved toward a more feminine, “full-on fashion” look, buyers increasingly passed up workwear staples in favor of statement pieces, she said. But at the same time, when the brand’s classic blouses and black pants made it onto sales floors, they consistently sold out.

“Our team is really good at designing workwear,” said Janice Sullivan, president at Rebecca Taylor. “It was always part of the collection, but we decided we should make it something bigger. So we’re isolating it and letting it have its own life.”

The Tailored collection is available in sizes 00 to 16, like all of Rebecca Taylor’s styles, which recently expanded beyond size 14. It will also follow the same production calendar of 10 drops per year, plus a base collection will be available year-round. Complimentary tailoring of the pieces is offered at Rebecca Taylor stores.

To promote the collection, Rebecca Taylor will transform its store in NYC’s Meatpacking District into a week-long pop-up starting March 18. The store will feature Tailored styles exclusively, as well as a full calendar of women-led events to help fuel foot traffic. The Wing will co-host the launch event — a panel on modern femininity and the workplace featuring Erin Loos Cutraro, founder and CEO of She Should Run, an organization encouraging women to run for public office. Other nightly speakers include Carly Zakan and Danielle Weisberg, founders of The Skimm, and stylist Stacy London, and Bumble Bizz will host a networking event. In addition, Core Power Yoga will provide classes every morning. The space will be equipped with a beauty space, charging stations, and a coffee and bites bar, to serve as a community space for women.

It’s not the first time the company has overhauled the space. For its fall 2018 New York Fashion Week presentation in February 2018, it partnered with Google and its Tilt Brush VR app to convert the store to a 3D art installation featuring the collection.

“Everybody knows the store’s there; we’ve built a great local community, and the area has become a real hub for tourists,” said Taylor. “So it’s not a matter of educating people or directing them to another area that’s only going to be there for a short time.”

Melissa Gonzalez, founder and CEO of the experiential retail agency Lionesque Group, said a number of her clients are currently looking to establish permanent flex spaces for spotlighting new collections and collaborations. They’re cost-effective, versus building out new pop-ups every time.

In addition, she called Rebecca Taylor’s partnership with The Wing smart. “It brings another level of cultural relevance to the pop-up,” she said.

Outside of the pop-up, Rebecca Taylor will be promoting the new collection across social channels: A video of the collection will be shared on Instagram, and select influencers are set to post images wearing Tailored pieces. The brand also expects that the pop-up speakers will build buzz on their own channels.

Rebecca Taylor has made it a mission to help customers save time. In October, the brand kicked off its Saturday Services initiative at its Madison Avenue store location, granting customers a range of rotating complimentary services to take advantage of during shopping trips. Services have included Paintbox manicures, Pure Barre workout classes and Drybar hair styling.

Sullivan said getting wholesale partners to sign on for new collections has proven painless because they’re all looking for something new. As with La Vie, which was a two-year exclusive partnership, Tailored’s exclusive launch partner for year one will be Nordstrom. After Nordstrom, La Vie was scooped up by retailers including Bloomingdale’s, Shopbop and Goop.

Taylor said she’s been able to stay true to the brand while releasing new categories, as each reflects her own taste and lifestyle.

“The customer can tell when it is and isn’t authentic,” said Taylor. “I have yet to do anything sporty or athletic-inspired — that’s not really a reflection of me.”

In the four weeks since the brand’s soft-launch of Tailored, there’s been incredible sell-through, said Sullivan. In the first year, the brand is expecting the collection to do $5 million in sales — $3 million in wholesale and $2 million through its own channels. Sullivan declined to share the company’s overall sales figures.