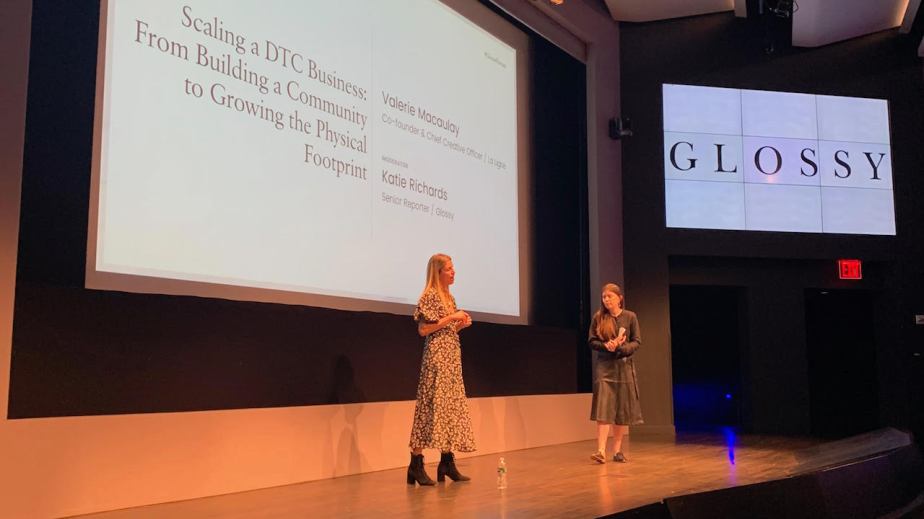 ‘Our customer wants more personalization’: Insights from the Glossy Forum

Fashion and beauty companies are rethinking their retail strategies, as e-commerce sales ramp up presenting new competition and challenges. At the Glossy Forum: The Age of E-Commerce in NYC, executives discussed what’s on their minds, including how to use data effectively, how to navigate new sales and marketing channels, and how to grow an all-essential community. Aside from the on-stage presentations, the events were conducted under Chatham House Rules.

What we learned
Taking time to invest in community building is essential for company growth.
The day’s speakers concluded that a community is the modern brand’s foundation. Building on that foundation means maintaining trust and facilitating connections, both between the brand and the community and between community members. Companies that have successfully built a community have found a means that feels authentic.

– Steven Tristan Young, CMO of social commerce platform Poshmark, said the company invests heavily in community-building events, knowing that they don’t directly drive ROI. “There’s a line item for throwing parties,” he said. “It’s just part of growing the business.” To build relationships with and among its 50 million registered users, Poshmark throws multiple Posh N Sip parties per month, throughout the U.S. Additionally, on a larger scale, it hosts an annual Poshfest, the latest of which drew 1,600 Poshmark users.

Offering customers multiple touchpoints is key.
When it comes to sales and marketing channels, it’s about meeting customers where they are. But providing a friction-less route to customer service is also important.

– Rebecca Minkoff is ensuring her brand is reachable, and truly helpful, to customers in need of service. “Right now, we’re not doing chatbots,” she said. “We feel our customer wants more personalization that that, and we’re exploring what that looks like.” Right now, customers on dedicated customer service channels and social media are being greeted by a customer service representative that’s been training on her voice. “We want her to know there’s a human on the other end of this, and not just someone who’s going to serve up canned answers.”

– Ben O’Meara, Huckberry’s executive director of marketing and brand partnerships, talked through the the company’s robust marketing mix, which includes a quarterly print catalog, thrice-weekly, newsletter-style emails and video. Each features “real guys doing real things,” and often, pieces of marketing are not tied to product. For example, the bottom third of every email exclusively features links to sites other than its own, which are often tied to reading or music recommendations. “It’s to offer value beyond just selling,” he said.

Establishing retail partnerships that makes sense takes work.
The right wholesale partner can help take a brand to the next level by giving it exposure in new markets, cachet via brand alignment and new marketing opportunities, among other perks. But many speakers said retailers’ traditional ways have also been problematic, to various degrees.

– Kevin Mogyoros, chief operating officer and chief financial officer at MZ Wallace, said the brand’s strict rule about never discounting product has been a pain point between it and wholesale partners. “Retail partners think we’re kidding when we say our product never goes on sale. But when we go to break up our relationship over the 30% off flash sale that includes our product, they realize we’re quite serious about that.”

– Soludos started out selling espadrilles exclusively in retail partners, including Opening Ceremony and Shopbop. Now wholesale is just 35-50% of the business. Founder Nick Brown said retail partners are important for discovery, but selling DTC has allowed the company more freedom. Buyers have had a “stay in your lane” attitude when the brand has proposed introducing other categories, like sneakers. But Soludos’ own channels have allowed it to try new products, make mistakes and iterate, he said.

BOTTOM LINE: Understand what you’re getting into when teaming with a wholesale partner, which includes forfeiting total control.

Speaker Highlights
Keynote speaker Rebecca Minkoff, co-founder and creative director of Rebecca Minkoff, spoke about how embracing innovation and adopting a “failure funnel” — which considers what new technologies the company’s AB testing, what’s involved and what will be rolled out on a larger scale — has worked to her company’s advantage. The following strategies are among those that recently stuck.

– Video: Minkoff said pushing out video through Instagram and Facebook last year cut down the company’s acquisition costs by more than half, which she owed to a level of trust consumers had with the brand upon viewing the videos. In 2020, the company will double-down on video, creating short-form and long-form videos customized by distribution channel, from YouTube to IGTV. And, due to video’s customer acquisition success, the company will cut down on its Facebook and Instagram spend, placing more focus on less expensive Instagram Stories, which has proven to convert.

– Livestreaming via WeChat: Minkoff said the brand is working with around 10 brand ambassadors with a large community of followers in China, where the brand has a small presence, and it’s looking to grow that ambassador network. The ambassadors livestream their visits to Rebecca Minkoff stores, where they feature styles available and take orders from Chinese viewers, later shipping their selects.

– Private Instagram accounts: The Rebecca Minkoff brand has several private Instagram accounts for around 1,000 shoppers each that it’s using for customer feedback and buy-in, whether involves either testing a product or providing input on a launch. They weigh in on factors like packaging and distribution channels. As a benefit outside of feedback, by the time the product is released, Rebecca Minkoff has at least 1,000 shoppers eager to try the end result.

In a breakout session, Alexandra Waldman, co-founder and creative director of Universal Standard, discussed the brand’s size-focused take on personalization through e-commerce. Through its See It In Your Size tool, Universal Standard allows shoppers to see every style on its site in every size it offers, from 00 to 40. Waldman said doing so is not easy or cheap, but it’s worth it for three reasons.

– It speaks to the brand’s mission. Waldman said she and her co-founder, Polina Veksler, launched Universal Standard to make a change in the fashion industry, which has notoriously ignored or segregated the portion of the population wearing beyond a straight size. The brand’s since debuted the Fit Liberty Program allowing shoppers to exchange a style for another size, if their size fluctuates, within a year of purchase. It also fits every style on fit models of every size, versus the standard one or two sizes. “We want to take size out of the conversation,” she said, adding that brands featuring side-by-side images of styles on straight and plus models are only furthering the segmentation of women of different sizes.

– There’s an appetite for it. Universal Standard shoppers view 1.2 million on-model product images a day, or 36 million a month, on its site.

– It’s paying off. Waldman said apparel is one of the lowest converters on e-commerce because customers typically can’t imagine themselves in the styles. Computer-generated graphics, often used to show sizes beyond straight sizes, can be misleading in terms of size and proportion, she said. But by showing the styles on real women of every size — many of which were scouted on Instagram — Universal Standard paints a clearer picture. Since See It In Your Size launched, the return rate has decreased significantly. Though the tool started as an experiment, the brand has decided to keep it based on both feedback and sales.

Step 1: Two years ago, Mejuri added a showroom to its Toronto office, based on customer requests to see the jewelry in real life. An email announcing its opening went to the brand’s distribution list in the area, resulting in an unexpected number of visitors and shoppers. Many had been following the brand for years, but had never transacted; eighty percent of transactions made in the showroom were by new customers. It proved the importance of offering a physical touchpoint.

Step 2: Mejuri built its first three stores, in Toronto, NYC and L.A., each “flex spaces” that, at around 1,300 square feet, are larger than most jewelry stores. The intent was to have ample space for community-building events like piercing parties and influencer dinners. Results so far have been positive: In cities, where a store is located, Mejuri has seen a 30-35% boost in online sales. In some cases, total revenue in the market has doubled. What’s more, the stores’ conversion rate is more than double that of traditional stores, said Masad, and LTV of Mejuri’s retail customers is higher than that of its online shoppers.

Step 3: Mejuri is planning to open five additional stores in the next seven months, in high-traffic areas of Mejuri’s key markets, based on online sales. More stores will follow, and not all will use the showroom model like Mejuri’s existing stores, said Masad.

Overheard
On collecting key data
“After a subscriber rents an item, we send them a survey on that item, where we collect a ton of feedback: whether it fit, whether it was their style, whether they wore it. It gives us dozens of data points, and it’s become a treasure trove of information that we use to do a bunch of different things: It helps us improve the overall experience and item selection for the individual user, plus it helps on the designer side — we pass along the feedback, and it [informs] what we order. That is, by far, our best and most successful way of collecting data. Most of that is done on the Rent the Runway app, which 85% percent of subscribers use weekly.” — Anushka Salina, chief revenue officer, Rent the Runway

The perks of a parent company
“[Intermix] was acquired by Gap in 2012. They really allow us to operate our business completely independently, but then they help pay our bills! It’s allowed us to do many things, because we’re able to integrate a lot of the functions they’re so great at — they have an incredible real estate team and legal team. In addition, we also get a lot of benefits in terms of media purchasing and things of that nature, because of their scale and their rates. For a mid-size company like ours, it’s super-helpful to have a parent company of that size.” — Jyothi Rao, president, Intermix

Growing pains, realized
“We started with three co-founders, a two-person design team and customer service. We were all wearing many hats, but it felt manageable. Now, we have a retail team, our design team has grown, and we have multiple people in customer service. As the team grows, you realize you have an office culture, and you’re responsible for that. It starts to weigh on you, all you’re building. It’s a lot.” — Valerie Macaulay, co-founder and chief creative officer, La Ligne

Pivoting to physical retail
“We’ve spent the last couple years heavily investing in our e-commerce capabilities, so now we’re pivoting and turning our attention to our retail footprint, and what that looks like and what that scale and rollout is going to be. We don’t ever see ourselves being a brand with hundreds of our own retail locations, but strategically, there are some important markets we want to look at for adding some stores [on top of our two existing stores, in NYC], both globally and in the U.S.” — Kevin Mogyoros, chief operating officer and chief financial officer, MZ Wallace

Luxury meets inclusivity
“We’re really trying to be more inclusive and have more of a presence on various platforms. We’ve partnered with [fashion gaming app] Covet, which has been hugely successful for us — it’s a partnership where they’re driving to our site in exchange for using our name in the app. It’s really about brand awareness — they have 3 million users a month, and since the start of the partnership [in September 2018], there’s more brand recognition for Badly Mischka among 89% of the users. We’ve also seen 864 million impressions on Covet and more than 200 million looks have been styled using Badly Mischka products. That’s worth over $100,000 in media budget.” — Christine Currence, president, Badgley Mischka