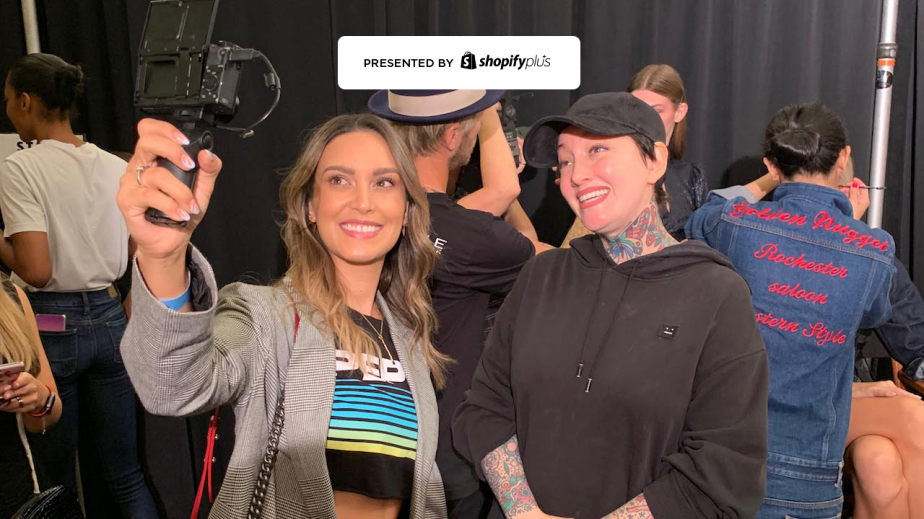 Fashion week may only last just over a week, but influencers, publishers and designers are all going all-in on video to try to make a more long-lasting impression.

It seems everyone launched a video strategy for fashion month — there’s YouTube, IMG and even Amazon Prime, exclusively streaming Rihanna’s Savage X Fenty show. And as New York Fashion Week has played out, the video boom has been obvious.

“I’m always in this position,” said Pau Florencia, beauty vlogger, former editor and influencer, backstage at Staud on Sunday, while holding up a camera set to selfie mode and secured to a handle. “At first, I just did Instagram, but I wanted to change things a little bit, so that I could create more content and be more specific. Beauty needs that.”

Florencia started her beauty YouTube vlog, The Urban Beauty, about a year ago, after working as a beauty editor for Harper’s Bazaar and Elle magazines in Mexico. The account now has 140,000 followers. Florencia said she’s already worked as a video influencer for brands including Maybelline, Estée Lauder, L’Oréal, Urban Decay and MAC.

“[Vlogging] is competitive, because there’s a lot of content out there. But if you connect and interact with your followers, and then listen to them and trust them to direct your content, that’s the key.”

Florencia said her followers prefer backstage videos, versus runway videos where the beauty details are less visible. And they like to see videos in real time.

Also backstage at Staud, Maybelline global makeup artist Erin Parsons said she, too, has transitioned her backstage coverage from photos to video. “I bring my own people at this point, because I’ve got my Instagram content to take care of. Who’s going to get better makeup footage than me?” she said. “I love video, because you can see the realness. You can’t get the shine on the skin in a picture, but you can see it when [the model] is moving. So I prefer to do video.”

Throughout the 2000s, fashion had made a real impression on TV. Popular shows like MTV’s “House of Style” and Canada’s “Fashion File,” and even the TV channel the Style Network all started in the late ’90s, offering an inside look at the exclusive fashion world. Now, with people increasingly viewing videos on mobile, fashion video is seeing a resurgence.

Publishers are also getting on on the act. Vogue will be publishing 20 videos featuring runway footage and behind-the-scenes action, shot on location at fashion weeks in New York, London, Milan and Paris. The videos, which will include episodes of both new and popular series, like “Beauty Secrets” and “Diary of a Model,” will be published on Vogue.com, YouTube and Vogue’s Instagram, via Instagram TV. In addition, Pluto’s TV Her channel will dedicate a primetime programming block to Vogue’s NYFW coverage.

“We’ve tried different approaches to video during fashion week, both on the site and on [the] Vogue Runway [app], looking at how we can use video to achieve our goals of authority, scale, recirculation and engagement,” said Sally Singer, Vogue’s creative digital director. “Everyone’s wondering: Do we livestream? Do we do backstage commentary? How quickly do we need to do it? Our approach has evolved, and our video program has grown and expanded — and now we’re taking what we’ve done that’s been successful, and applying that in a strong way to this month of shows.”

Vogue recently hit 6 million YouTube subscribers and, according to the company, its videos saw 62 million total views on YouTube in August, up 111% from the same month last year. Seventy-one percent of its videos are viewed on mobile.

According to Robert Semmer, vp of Vogue Video at Condé Nast Entertainment, the company’s success with video coverage of the Met Gala this year informed its coverage strategy for fashion month. His team produced 54 videos between the Monday of the gala and the following Friday. Vogue’s YouTube channel garnered its most-ever views during the month, at 173.1 million.

“There isn’t a real long-tail to it,” he said. “People are consuming in-the-moment, as close to real time as possible.” So for fashion week, Vogue’s runway videos will go live within 12 hours of showtime.

Semmer said the goal is to stay competitive within people’s feeds by getting out as much content as possible, as fast as possible. His team will have a mini-HQ in each of the fashion capitals, with eight to 12 people working out of it, including four editors working day and night shifts, as well as producers, directors, shooters and sound people.

“Everyone’s in this game right now, looking to be the hub for fashion month, and we know that,” said Singer. “With our coverage, we’ve always tried to replicate the conversation we’re having in the office — what the most devoted followers of style are talking about, looking at and when. If we can be agile enough to do that over the month, with a very robust video offering, we’ll have nailed it. It’s not a significant change, it’s just a further investment into the thought process. And it’s what we have to do, because we’re Vogue.”

Likewise, IMG — owner and operator of NYFW: The Shows — has gone all in on video, teaming with Endeavor Streaming to launch last week NYFW: All Access, a live-streaming service set to showcase more than 60 live fashion shows plus videos proving insider looks backstage.

“I always say there’s one global stage, and it’s the phone,” said Leslie Russo, evp of fashion partnerships and marketing at IMG. “And everyone’s watching video on their phones.”

This season, fashion fans will have plenty to watch.

6 questions, in 60 seconds with Tanya Taylor
The founder and creative director stepped away from her spring 2020 presentation on Sunday for a quick-fire Q&A about the collection.

What’s new about this season’s collection, compared to the last?
It’s sportier.

Did you also change-up your typical model lineup?
There’s more size inclusivity, more diversity being shown in the clothes — I think we’ve really built a team of women that represents what we believe in.

Is the presentation show model here to stay for you?
I don’t know! It’s always dependent on what story we feel like we want to tell.

Is anything here available to buy now, or is see-now, buy-now not for you?
No, I feel like people can wait for really beautiful things.

Are the models wearing Tanya Taylor accessories?
We did our own shoes, and we collaborated with Truss on all the bags. Truss has a whole cooperative in Oaxaca, so we wanted to work with those women.

What do women want to wear today?
Happy clothing.

#OH
“I did an interview yesterday, and the reporter took everything I said out of context, and I just feel sick. This is why we don’t talk. It’s all about image.” — one fashion influencer to another, at the Deveaux show Sunday morning

NYFW Briefing: Size-inclusive or bust
The first trend of New York Fashion Week
Chromat turns 10 with a push toward a new kind of inclusivity

Starred
Tonight will be mad dash for fashion week attendees snagging tickets to both the Tommy Hilfiger and Pyer Moss shows. The Tommy show starts at 8:30, and will be held at the Apollo Theater in Harlem, while Pyer Moss, starting at 9:30, is set for Kings Theatre in Flatbush, Brooklyn. The two are at least 45 minutes away from each other via car and an hour-plus away via subway, per Google Maps. Luckily, the Pyer Moss team is arranging transportation for those show-hopping between them. It will be interesting to see what time the Pyer Moss show actually gets underway.