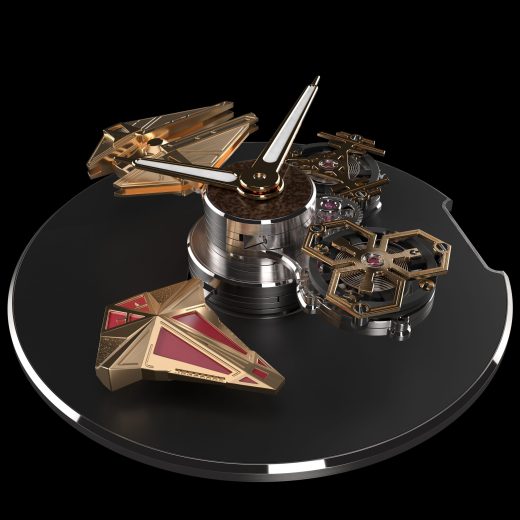 Luxury watches are launching into the metaverse as NFT collectibles

The luxury watch industry is uniquely positioned to embrace the culture of rare limited editions and NFTs, as watch collecting has millions of fans around the globe. So, where should luxury watch brands be looking next?

The demand for high-end watches has surged since the start of the pandemic, as people have taken time to research watches and see them as a valuable asset class. The Federation of the Swiss Watch Industry reported that, in 2021, watch exports costing more than $3,200 grew the most out of all watch categories, increasing 14.8% compared to 2019. The situation has made luxury watches scarce, with traditional mainstays like the Rolex and Audemars Piguet currently unavailable, even through their famously long waitlists at dedicated stores. Physical watches are usually kept as trophy investments, but NFT watches can have various uses, from being worn in the metaverse to kept in NFT art collection inventories.

The growing interest in fine watches has also extended to the secondhand market, with the shortage in the primary market driving sales growth among resellers including eBay, agile startups and individual collectors. McKinsey estimates that pre-owned watch sales hit $18 billion in 2019 and could top $30 billion by 2025. With the unexpected growth during the pandemic, many watch brands are taking the time to innovate and develop the next chapter of the watch industry that includes NFTs and crypto-collectibles as rare physical watches become harder to find.

The first watch NFT to ever go on sale was back in March of last year on Open.Sea. The Bigger Bang All Black Tourbillon Chronograph Special Piece was offered by Jean-Claude Biver, an industry veteran, along with Swiss company WIseKey as a digital twin image NFT. However, the NFT did not have any function attached. Further development is needed to engage the community of younger NFT collectors; they expect a more sophisticated NFT function that brings benefits like exclusive access or interoperability in gaming environments that are in line with the watch’s heritage and the demand of the collectors.

Following the auction, Sotheby’s became the first auction house to auction an NFT in April, when it put up for auction a Ressance Spymaster watch and computer-generated video NFT. However, the watch-NFT space has sat fairly empty in the months following. It was only this year that more innovative watch brands began engaging with the space and creating NFT watch collector communities. Holden Bale, head of commerce at digital agency Huge, said brands should learn from others, like Gucci, that are creating immersive storytelling and experiences with their NFTs. “Understand that, one day, Gucci is going to shut down an art museum, and it’s only going to be open to people who have those tokens that it sold. You can expect that, even though they haven’t done it yet.”

American watch retailer Jacob & Co is known for its radical approach to innovation within the traditional field of watchmaking. It’s planning to come out with a bespoke collection of fine watches called Astronomia Metaverso — it will include styles in both physical and NFT digital formats. The collection draws inspiration from the solar system and extends into the metaverse, an area that has been left relatively untouched by the watch industry. Personally designed by Jacob Arabo, founder and chairman of the company, the metaverse collection will feature eight distinct watches.

The Jacob&Co digital watches have not yet been released, but they’ll be sold on UNXD, the same luxury NFT marketplace where the Dolce & Gabbana Collezione Genesi sold for a record $5.65 million. Although the details of the designs are still under wraps, the lack of digital limitations suggests they’ll enable more interactivity than their physical counterparts, as well as 3D effects. As the luxury watch industry continues to raise its prices, the NFTs will allow avid collectors to add to their collection with a style likely to appreciate in value. Considering the ongoing interest in the D&G NFT collection on UNXD, by both DAOs and individual collectors, the new popularity of watch collecting will certainly elevate their price.

Jacob&Co is not the only company to come out with luxury watch NFTs. Luxury watch brand Louis Moinet has partnered with Exclusible, a premium NFT marketplace, and Tafi, a leading designer of avatars and digital wearables including NFTs, to come out with an original NFT collection inspired by the Louis Moinet Space Revolution Watch. “The industry has been disrupted in the past few years with new ways of keeping time, through connected or digital watches offering a new kind of functionality,” said ​​Jean-Marie Schaller, CEO of Ateliers Louis Moinet. “NFTs and their unique nature offer a different way to express Louis Moinet’s creative roots, using a new technological frontier.”

Inspired by the brand’s Louis Moinet Space Revolution Watch (retailing for $380,000) — which was only released in eight models, took three years to design and features a piece of meteorite — the NFTs will be limited to a run of 1,000 and feature a one-of-a-kind experiential utility. It’s set to launch in early 2022. As the NFT timepieces will come with an avatar, they will be unique to the collector looking to expand their digital footprint and be able to wear their watch on gaming platforms like The Sandbox.

Most importantly, the brand recognizes the value in developing a presence in the metaverse. It’s launched on Exclusible’s Luxury District in The Sandbox, a decentralized metaverse gaming platform. The brand also wants to focus on long-term community engagement by releasing more NFT drops that build on the NFT utility and value. This can be disputed, as additional NFTs can lower the value of the originals, unless they have a different function. The brand is yet to disclose what the next drops will feature. For now, for NFT holders, the collaboration will extend to Apple watch backgrounds, as well as competitions for prizes within their community.

Talking about the collaboration, Olivier Moingeon, co-founder and CCO of Exclusible, said that gamification is a way to engage deeper and longer with fans, creating a new kind of emotional relationship between a brand and its users or clients. “Ultimately, the power of an NFT collection will also rely heavily on the utilities that brands develop for their community,” he said. “As such, NFTs can be seen as an access key to a private club that brands can enrich through physical, experiential or digital activations.” It’s an additional way that brands can renew their creativity and keep innovating. They can also lean on NFTs to express their point of view and heritage through artistic collaborations or by creating unique, generative NFTs inspired by their products.

Generative NFTs, or those that are replicated with varying features, are the most commonly viewed today. They use AI to scramble features, like facial attributes, colors or textures, to create multiple variables of the same design, as with the Bored Apes Club or Jesus Calderon’s Generative Watches. Just as with real-life watches, rarity traits are imposed on watch NFTs to develop a variegated pricing model. Calderon’s project has similarities to the Mason Rothschild baby Birkin in that it takes an existing watch design and presents it as a digital artwork. In an interview for watch publication Hodinkee, Calderon said he is focusing on big, well-known brand pieces, as those give him the most visibility and lead to better trades for his community. As brands enter the space, they will be reclaiming that visibility that is part of successful NFT projects.

As more than 2.8 billion people worldwide count as video game players, the NFT-gaming crossover is particularly popular, with play-to-earn games like The Sandbox leading the charge. With more users collecting NFTs to use in games, watches like the Louis Moinet Space Revolution timepiece could become collector’s items in the metaverse and in the physical world, uniting two strong collector groups.

Sharing an appreciation for community and luxury value, clubs like the CryptoBear Watch Club are taking advantage of the unity between the two to create the first metaphysical luxury watch community and gaming experience. Through their own run of 10,000 CryptoBear NFTs with varying degrees of rarity, club members will be able to redeem their NFT royalty payments through HODLing for real luxury watches. HODLing is defined as holding onto cryptocurrency value for a long time, similarly to how watch collectors keep older timepieces as they accrue in value.

The CBWC founding team is using its access to the world’s most exclusive luxury watch dealers, and their love for the impassioned NFT community, to improve accessibility to the luxury watch world via Discord channels and an upcoming P2E MMORPG experience. Talking to the CBWC team, it is evident that the most important part of the project is the community. In the upcoming Arkouda game, the idea of physical luxury item ownership served as inspiration for the time-controlling “powers” possessed by included bear avatars. “The watch community is very tight-knit. It’s good to see in our Discord, where we have ‘watch talk,’ that all our users are so engaged. [The watch club has over 50,000 active users.] These aren’t small-time watch collectors — and even if you don’t own a timepiece, you’re motivated to own one, even if it’s just in the metaverse.”