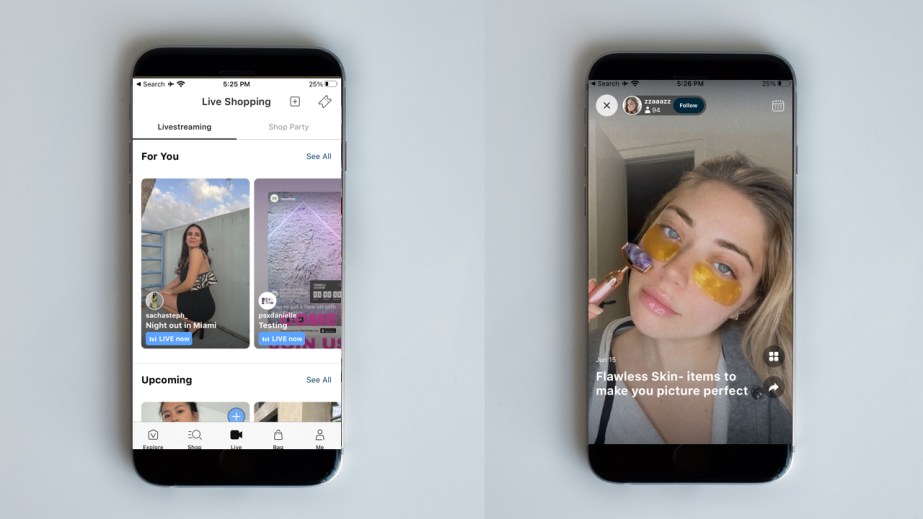 The growing adoption of livestream shopping is increasingly spreading to fashion and beauty retailers.

On Monday, curated e-tailer Verishop became the latest to adopt livestream shopping in-house, adding the capability to its mobile app. Forty-four influencers, including major names such as Gabriel Zamora, participated in hosting streams on the app. Shoppers are able to click on the “live” option on the bottom menu bar to see current and upcoming livestreams. Links to purchase appear on the screen as the presenter describes the product. Clicking that link will open a checkout page, while the livestream will continue to play in the corner. Viewers can also access the full list of items featured in the livestream at any time during or after the livestream.

“The biggest thing livestreaming does is help you discover,” said Imran Khan, CEO of Verishop. “A lot of times you don’t even know what exactly you’re looking for, but you have some ideas. If you’re looking at fashion and beauty, livestreaming is a great way for consumers to learn about the product and have an experience that you would get in a physical world.”

Hair-care brand R+Co plans to use the Verishop livestream platform to feature stylists and other experts from its team demonstrating products. Dan Langer, the president of R+Co, said the brand uses livestreaming as “a way to discover newness and learn.” He hopes the brand’s livestreaming strategy “can evolve into regularly scheduled programming.”

Site and app-based livestreaming activity has been growing among major e-tailers and retailers including Amazon and Ulta Beauty, while others such as Sephora have turned to social platforms such as Instagram or Facebook to offer shoppable lives. On the luxury end of the spectrum, pure-play retailer Net-a-Porter has done shoppable livestreams on Instagram, while Moda Operandi has hosted them on its website.

When fashion and beauty e-tailer Tiare Rose launched earlier this year, the founder was sure to build livestream shopping into the site.

“When we envisioned the idea for a modern retailer, it was a no-brainer that live streaming would be a part of it,” said Kim Castellano, founder of Tiare Rose. “Video is everything now, and being live is just a part of life.” The brand hosts livestreams twice a week from its Idaho-based physical boutique, featuring outfit or beauty advice with either staff or influencers.

Verishop’s model, meanwhile, is heavily focused on influencer hosts, with influencers streaming from their own accounts on the app. They then receive an undisclosed part of the revenue of items sold, said Khan.

The lines of social media and e-commerce are increasingly blurring among retail startups, but individual companies understand the necessity of a unique experience. In addition to its new livestreaming feature, Verishop has an Instagram-like photo feed as well as a “shop party” feature that allows people to browse with friends. According to Khan, 10% of Verishop’s sales are now driven by its social content.

The role of social content in driving sales is part of the “democratization of content and democratization of inspiration,” said Khan. “We’re moving away from a world where two or three people tell you how you need to look.”

For Castellano, “keeping the elevated aspect” of the e-tailer is also important for Tiare Rose’s livestreams. “It’s a fine line you’re walking because you don’t want to be salesman-y,” she said. “You want to provide value, keep it upscale, provide information and invite comments.”

To keep the branding upscale, “curation is really important,” she said. “There is an exhaustion, with big platforms,” as “people don’t have the bandwidth” to sort through vast assortments of items from an online shopping grid system. “They want someone to say, ‘Hey, this is great, this is sustainable, this is going to look good on you. Here you go, this is what I’ve picked out for you.’”

Although U.S. retailers’ livestreaming adoption has been accelerated by the pandemic, they expect it to remain popular even now that restrictions have been lifted in many areas. Castellano predicted that along, with a return to stores, “livestreaming will continue to play a role” due to the demand for curation and information. “It needs to be entertaining. Maybe they won’t buy, but people will use it as entertainment.”