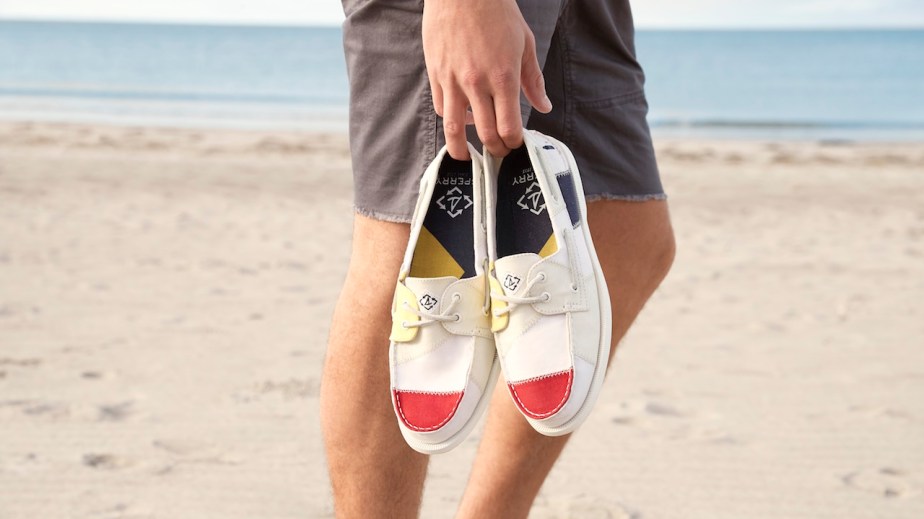 ‘It’s not an easy ship to turn around’: Sperry wants to change up its preppy image

New England favorite Sperry is in the midst of something of a reinvention. After a few years of struggling sales, the brand’s numbers finally turned positive at the beginning of 2018 and saw slow but steady growth throughout the year.

To keep that growth alive, Sperry is branching out into new categories and embracing a new customer beyond the traditional preppy WASP aesthetic that has been the brand’s signature for years.

Striving for sustainability
First up is a new collection of sustainable footwear, launching today, made from recycled plastics drawn from the ocean. The collection was developed with Bionic, a company that collects recyclable waste from beaches and the ocean and turns it into usable plastic, and the Waterkeeper Alliance, an organization focused on protecting the world’s oceans from environmental harm.

Since Sperry has never really made sustainability a major focus of its identity, the brand is connecting the initiative with its maritime roots in its messaging, to make the transition to marketing itself as sustainable more seamless. Sperry is going for a big digital push to drive awareness of the collection.

“It’s our first real initiative in that direction,” said Kate Minner, CMO of Sperry. “With anything like this, it takes some development, testing on construction and materials. The first [sustainable product] launch has been in development for a number of years. It’s taken a lot of planning.”

While Minner acknowledges that sustainability is a relatively new space for Sperry to explore, she stressed that the brand is not trying to completely upend its image. She said it would be dishonest to suddenly pretend Sperry is 100 percent sustainable or that sustainability has always been a part of the brand’s identity.

Instead, Minner said sustainability will be an ongoing project for the brand and that customers who have no interest in it can safely continue shopping the brand’s staple pieces without fear of the brand changing. This is essential for a brand as old as Sperry, Minner says.

“For Sperry, we are coming up on our 85th anniversary,” Minner said. “We are a heritage brand; we’ve been around a long time. I’m not trying to tell people we are a whole new brand now. We want [sustainability] to be a part of the Sperry brand, but not all of it is. We have our sustainable stuff, but we still have our regular shoes. It’s just about offering new options.”

Streetwear experiments
Outside of sustainability, Sperry has also been exploring an area that is about as far from the brand’s traditional preppy domain as one can get: streetwear.

Throughout the last year, the brand has significantly expanded its partnership with Noah, the sustainable footwear brand founded by streetwear legend and former Supreme creative director Brendon Babenzien, to create a line of streetwear-themed re-imaginings of Sperry shoes and sneakers called Sperry Cloud in July of last year. Sperry’s ongoing partnership with Noah culminated in their latest collaboration, a collection of pirate-themed shoes released in December.

“We wanted to work with partners that had a lot of synergy with us,” said Adam Meek, global vp of product at Sperry. “Brendon was a fan of the brand, but he wore it in a completely different way than our traditional customer. We’ve pulled back from a lot of short-term collaborations and are doing more long-term partnerships with fewer partners, like what we’ve done with Brendon and Noah. But it’s still in the realm of the Sperry brand.”

The crossover between Sperry and streetwear is not too surprising, given the recent fascination in the streetwear world with American heritage and workwear brands like Champion, Carhartt or Levi’s.

“Sperry is one of those American heritage brands that ebbs and flows in popularity, but makes products that are always relevant,” said Jian DeLeon, editorial director at Highsnobiety. “Their collaborations with Noah made perfect sense, since Noah is heavily inspired by traditional American style and nautical cues alike. With their Cloud line, it builds on that energy in a way that doesn’t revisit the past too much but places their footwear in a modern context with a timeless lens.”

J. Crew has been struggling recently, with floundering sales, being left rudderless after multiple high-profile departures at the executive level. The brand has been relying on its sister brand Madewell to carry the company forward. Vineyard Vines, despite a recently announced partnership with Target, also struggles. A survey from YouGov found that only 37 percent of respondents had even heard of the brand, and only 17 percent had a positive opinion of it.

This has left Sperry as one of the better-performing brands in this space, although it has struggled. It has managed to turn in a full year of positive growth to become the primary driver of revenue at its parent company, Wolverine World Wide, which includes other footwear brands like Keds, Saucony and Merrell. While the company doubled its year-over-year sales to $59 million in the third quarter of 2018. Though it still underperformed, CEO Blake Krueger credited Sperry for keeping the company on the upswing in an earnings call.

As Sperry moves into the future, Minner knows that brand perceptions cannot change overnight. Still, she says, Sperry is trying to make these new developments — the exploration of sustainability and streetwear — long-term projects.

“We are doing as much as we can, as soon as we can,” Minner said. “But we’ve been very honest about the fact that it’s not an easy to ship to turn around. It takes time.”