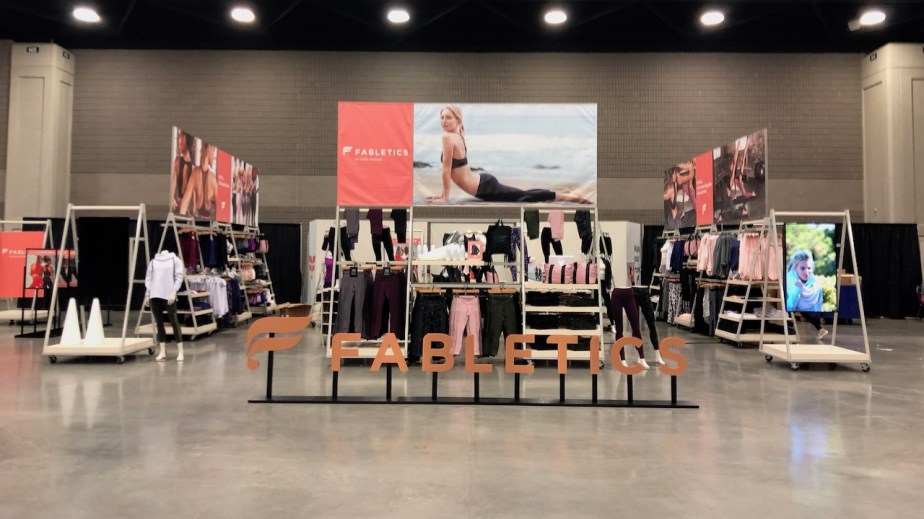 ‘It’s Black Friday on steroids’: Why Fabletics is hosting pop-ups at cheer competitions

For Fabletics, all-day cheerleading competitions are the new Black Friday.

In August, the women’s athletic apparel brand inked a two-year deal (with the option to extend the agreement) to be the exclusive activewear partner of Varsity Spirit, a company that has hosted competitions for middle-school to college cheerleaders since 1980. Between September and May, AKA cheer season, Fabletics held pop-ups at eight competitions for a total of 16 days, cherry-picking those in desirable markets that were historically best-attended, according to Varsity Spirit.

Across the events, Fabletics earned more than $500,000 in revenue and signed on more than 5,000 new members. Those members are proving to have a lifetime value comparable to that of members who sign on in Fabletics retail stores, which is 250 percent higher than those who become members online. Around 200,000 total people attended the events.

“These competitions are just like Black Friday at one of our busiest stores, in that they’re non-stop,” said Ron Harries, vp and head of retail at TechStyle, which owns Fabletics. “Then there’s the Dallas event [the NCA All-Star Nationals], which is Black Friday on steroids; it was our largest revenue event of the season.” The weekend event, held in early March, attracted 70,000 attendees.

The partnership came to be when, after an email introduction, Harries and Fabletics co-CEO Adam Goldenberg were invited by Varsity Spirit to visit the Dallas competition in early 2018. They realized the opportunity for the brand upon seeing the captive audience of parents and family members, a majority of whom were millennial moms.

At the time, Fabletics, which now has 27 permanent stores, was just beginning to consider pop-ups. (It hosted its first pop-up in New York in late April, and plans to open an average of 24 permanent stores per year over the next two years.) The Varsity Spirit pop-ups outperformed other attempts to date.

“In general, it’s pretty tough to generate really big excitement and big numbers with a traditional pop-up,” said Harries. “It’s a different kind of customer. Unlike [at Varsity Spirit events], you don’t fully understand why that customer is at that location at that time.”

Though Harries declined to put a number on Fabletics’ spend with Varsity Spirit, he said it makes up a “really small portion” of the company’s total advertising and media budget.

The partnership is also something new for Varsity Spirit. Taylor Easton, the company’s director of corporate sales and partnerships, said prior to Fabletics, no sponsors had sold product at competitions. Instead, their agreements were limited to on-site activations directed at the young athletes, involving, for example, collecting emails and doing giveaways. Their logos are typically displayed on signage, and some tack on commercial spots that run during the competition broadcasts on ESPN, ESPN2 and CBS Sports. Other current sponsors include Gatorade and It Haircare. “Nine in 10 cheerleaders who interact with a brand at one of our events say they are very likely to buy from the brand,” she said.

Easton said the partnership is equally beneficial to Varsity, as it provides the parents and coaches attending a competition with an experience catered to them. They’re typically at the events for hours, watching their kids and students compete for less than three minutes before waiting around for awards ceremonies.

Harries compared the competition pop-ups to a traveling road show. Fabletics worked with an independent designer and a fixtures company to develop the transportable “kit of parts” that make up the setup, fitting rooms included. In addition, it developed a traveling kit of devices, offering the same technology as the company’s retail stores. “From a customer’s point of view, it’s the exact same experience,” said Harries. The company used the same kits for its recent NYC pop-up.

Fabletics pulled in interested store managers from its Salt Lake City and Tampa locations to head up both the stores and a newly established retail partnerships and pop-up team. They oversee all pop-up logistics, from setup and teardown to merchandising and staffing. Fabletics rewards top-performing managers and associates by allowing them to travel to and work the events. “It’s very hard for us to use temps,” said Harries. “We need people who understand our point-of-sale system, our membership, our brand and who we are,” said Harries.

Typically, a trailer with the kits arrive on location on a Thursday night for a store that opens Friday afternoon. The staff works as late as 3 a.m. “to do all the stuff that typically takes days,” said Harries. The events usually end at 9 p.m. on Sunday, and the team tears down the pop-up and has the kit back on the truck by Monday morning.

At the Varsity Spirit events, Fabletics’ setup varies from being positioned near the main competition stage to being housed in a ballroom off the main hallway. Harries said challenges have included securing adequate Wi-Fi and working through the sheer number of visitors wanting to interact with the company in a way that’s on brand.

The company is unable to sell styles with cheer-related imagery or messaging, which would compete with Varsity merch. For competitions on Disney properties, it sells wholesale product to Varsity Spirit for distribution, as Fabletics is not licensed to sell on site.

Varsity Spirit promoted the pop-ups across social media, concentrating on Instagram, Instagram Stories and Twitter, where it sees the most engagement. It worked with Fabletics’ influencer marketing team to outfit influential coaches and Varsity Spirit employees for posts on their own channels and the company’s. In addition, Fabletics co-founder Kate Hudson made a video dedicated to “cheer moms,” which played at the competitions and drove to the store.

But Harries said there were some missed opportunities for brand exposure and interaction in the first season. He and his team are currently exploring campaign and other ways to connect that are more customized to the Varsity Spirit mom. They’re also working with Varsity Spirit to develop exclusive merchandise.

According to Easton, other companies are now asking about hosting similar pop-ups, after moms working at brands experienced the Fabletics store. She said the company is considering ways to build on the idea, like featuring a marketplace at competitions.

The success of the pop-up also opened new possibilities for Fabletics. First and foremost, it verified that the company’s proprietary technology can work anywhere. The company is now eyeing other fitness events and partnerships where selling may be possible, and considering shorter-term pop-up locations. It may even take a page from Varsity Spirit’s playbook and enter the events space.

“Eventually, I’d love to host amazing events, where an influencer would come and offer a free workout to hundreds or thousands of people,” said Harries. “We’d pop up and just have a Fabletics party. We now know what we can execute.”