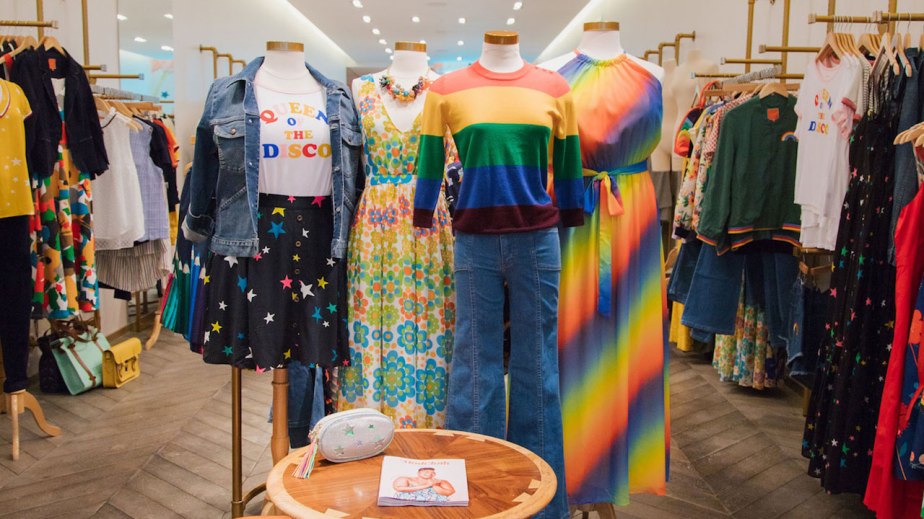 ‘It’s a re-unveiling of the brand’: Modcloth enters period of rapid retail expansion

On Saturday, the Los Angeles–based company is opening the doors of its first-ever physical retail space in New York City. The launch of the permanent store, located on a prime corner in SoHo (Crosby and Broome), represents the start of retail-rollout tear set to continue throughout 2019. By the end of December, Modcloth plans to have 19 new stores under its belt.

The new store opening coincides with the kickoff of Modcloth’s first wholesale partnership, with Nordstrom. The brand began selling on Nordstrom.com on February 9, and on Saturday, it will enter 20 Nordstrom locations in cities including San Antonio, San Francisco and St. Louis.

At the same time, Modcloth is expanding and improving its e-commerce offering in international markets. By early March, it will accept payments in most local currencies and repair the existing customs-related friction of international shipments and returns.

“The team has been working hard for the last 12 months for this moment; it’s a re-unveiling of the brand, to the broader community,” said Modcloth CEO Antonio Nieves.

Nieves said, rather than try to get the Modcloth customer to shop one way, the goal is to cater the shopping experience to fit her lifestyle. “There’s a critical component of having a multi-channel view, which is that you’re not wholly dependent,” he said. “We’re here to put this brand on the map, and physical retail is one of the keys of that expansion.”

Like Modcloth’s current stores, based in San Francisco, Austin and Washington D.C., the NYC location and the others opening in 2019 will be FitShops, which is Modcloth’s term for its showroom model: Stores that carry samples only. Shoppers can try them on for size and place orders to have them shipped to their home.

Among the perks of owning physical retail, Nieves listed the opportunity to tell the brand’s full story, which is rooted in providing women clothing in inclusive sizes. (Styles are offered in XXS to 4X.) And compared to a traditional store, the showroom model gives in-store shoppers access to more product. At any one time, Modcloth.com is selling 600 to 700 dresses. In the 2,000-square-foot NYC store, the company can sell most styles, whereas if inventory were part of the equation, a 10,000-square-foot space would be needed, said Nieves.

Modcloth will be promoting the new store by sending 32-page catalog mailers to current and prospective customers in NYC. It will also use targeted emails and promoted posts across social channels. All opening weekend, the store will host launch events including dinners with influencers, brand ambassadors and press. And once the dust settles, in March, Modcloth will launch a local out-of-home campaign driving to the location.

The next FitShop locations are set for cities including Chicago, Salt Lake City and Philadelphia. “The beauty of being a digital-first brand is we have a ton of data on where our customers are,” said Nieves, “And that’s where we’re going.” He said a lot of companies over-index in major cities, so 20 percent of sales are in NYC and 15 percent are in L.A., for example. In contrast, Modcloth’s biggest U.S. markets encompass just 5 percent of sales, so distributing stores nationwide makes sense.

While showrooms are catching on, popularized by menswear brands like Indochino and Bonobos — where Nieves was formerly CFO and COO — it’s not yet a proven model in women’s retail.

“It’s good for people to have a physical touchpoint; you need that,” said Syama Meagher, chief retail strategist at Scaling Retail. “But it’s better for furniture and high-end items you don’t feel comfortable walking out of a store with — that luxury concierge model. With lower-priced items items, it doesn’t make a lot of sense. The customer loses that dopamine hit, or that high of, ‘I just bought this.’”

However, Meagher did condone Modcloth’s choice of opening in second- and third-tier markets. “More brands should be looking at these markets for penetration: Dallas, Austin. They have yet to be exploited” she said. “Your first locations should be where your customers are. They’ll be more profitable without the overhead of a first-tier market, and they’ll drum up more buzz.”

Outside of the U.S., Canada and Australia are major markets for Modcloth, each representing 6 percent of sales. Modcloth’s current focus on facilitating international online sales is largely in response to demand in those areas.

As for the Nordstrom partnership, Nieve said it was driven by the retailer’s like-minded focus on the customer experience. “I also love their entrepreneurial DNA and the fact that they take some risks,” he said. “They’ve recently linked with a lot of amazing digital brands.”

To amplify Modcloth’s fit focus to shoppers without access to a FitShop, Modcloth is ramping up its distribution of content, with a concentration on educational videos shared on YouTube and Instagram. For example, on Tuesday it posted a video featuring its Technical Design Team showing the development of a new numeric size offering spanning 00 to 28.

Of course, all of this would not be possible had Modcloth not been acquired by Walmart, for between $50 million and $75 million in March 2017. Though the brand faced some backlash from customers at the time, that did not deter it from taking full advantage of the opportunity presented.

“They see the opportunity that Modcloth has, and they’ve been magical in allowing our brand to be our brand,” said Nieves of Walmart. “They allow us to live our values around inclusivity and body positivity, and they give us the support to do what we do on a much larger scale than if we were independent.”

“This market has been underserved, and now they’re getting an equal number of options,” he said. “It’s not a negative. And it just means we’ve got to do a better job of offering her a great assortment of great product that suits her lifestyle. We’re up to that challenge.”