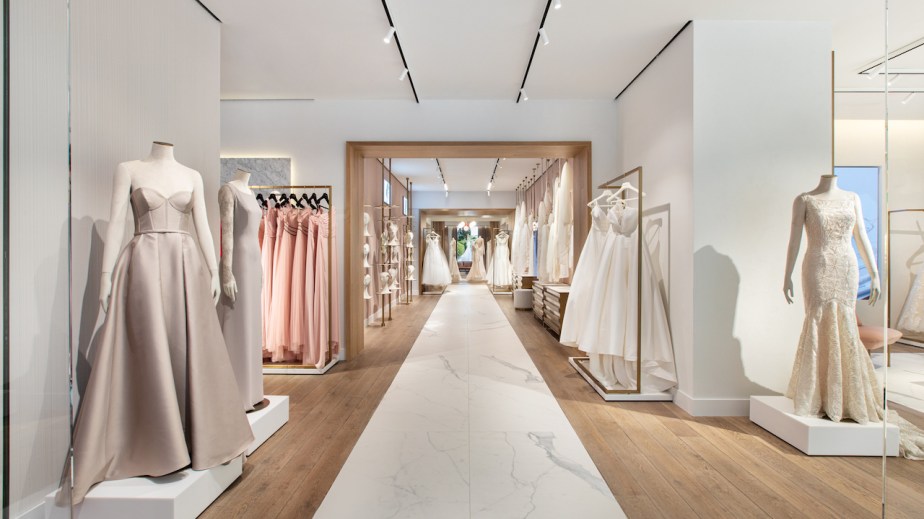 Bridal gown brand Pronovias is modernizing its operations across the board to win over American brides-to-be.

The nearly-100-year-old Barcelona-based company, which hosts an annual couture runway show in its local bridal fashion week, is facing challenges common to luxury fashion brands as they look to evolve with the times while also retaining longtime customers.

“The quality of craftsmanship that goes into our dresses is what we’re known for,” said Amanda McCormick Bacal, president and managing director of Pronovias North America. “We can’t lose that; we would lose what the heritage of the brand is all about. But at the same time, we need to be able to work in today’s environment, meet today’s customer’s expectations and allow flexibility based on the bride’s needs.”

Pronovias has long counted Europe as its primary market. Under the leadership of 18-year L’Oréal executive Amandine Ohayon, who joined as CEO in early 2018, it’s working to expand in the U.S., where sales comprise just 15% of its total. Ohayon aims to double U.S. sales in three years, with expansion of its retail footprint a key strategy. It’s opening a store in Miami this week, with a total of seven set to open this year. It’s also building a business in China and eyeing other “high-potential” markets, said Ohayon.

A wave of emerging brands in the U.S. have aimed to take on the stale bridal market with companies and concepts answering modern shoppers’ behaviors and expectations. Digitally native companies have popped up since 2012, including gown brand Floravere, which launched with a try-on-at-home concept, and Nearly Newlywed, centered on wedding gown resale. In addition, several wedding band companies, like Frank Darling, have launched with Warby Parker-style home-try-on kits. Vera Wang and Monique Lhuillier are still among the industry’s most recognizable, go-to designer brands, and their recent lack of focus spells opportunity for Pronovias, said Ohayon.

”They’ve transitioned a lot,” she said. “They’re licensing, they’ve got ready-to-wear, housewares. They’ve put their focus elsewhere, and that’s why they’re not as visible as they used to be.”

Pronovias’ current plan of attack for the U.S. market comes down to three steps: embracing diversity, elevating the shopping experience and meeting the customer where she is.

Embracing diversity
To win over U.S. customers, in particular, embracing diversity is key, said Ohayon. For Pronovias, that’s translated to offering every style in its catalog to women of every size, including petite and plus, and allowing them to shop the main floor, rather than restrict their options to a section of a store. “We’ve got 14 people in Barcelona just working on pattern production,” she said. “We have the resources to be able to do that.”

In addition, Pronovias is “one of just a few players” offering maternity bridal styles. Last year, two of the five most-viewed dresses on the company’s website were maternity styles. To connect with older brides, Pronovias featured a 60-year-old model in its latest runway show.

Elevating the shopping experience
On the Glossy podcast in April, Nearly Newlywed founder and CEO Jackie Courtney said wedding-focused companies aren’t under the gun to modernize like those in other industries because consumers have a one-and-done relationship with them.

“If you talk to a woman who went through the process, she’ll say, ‘It was frustrating, and I didn’t know the cost of anything, and it took eight months to make my dress — but I did it, and now I’m done,’” she said. “Other industries are getting more pushback because the customer continues to participate.”

As Ohayon sees it, Pronovias’ success depends on brides’ word-of-mouth reviews. (“If something goes wrong, it’s a disaster for us,” she said. “You can ruin the entire wedding day, and the bride could actually be upset for the rest of her life.”) So the company needs to put pressure on itself to provide a highest-level luxury experience. Details from the drinks served to the store’s scent are designed to make the in-store visit feel like a “treat.”

“Our associates have to be the expert and the [bride’s] best friend,” she said. “We look for people who have a warm, empathetic attitude, which doesn’t necessarily come from a pure bridal background, and we spend a lot of time training them.”

Pronovias recently implemented a new compensation plan for associates, in which their pay is based on customer feedback in addition to sales commission. An emailed survey is sent to shoppers immediately following store appointments, asking whether they would recommend the brand to a friend or family member. Twelve percent of customers respond.

“The associates love it, because it helps them perfect the service they’re offering,” said Ohayon. “We now know how we were doing.”

Meeting the customer where she is
Finally, Pronovias wants to have more of an omnichannel presence to keep pace with broader retail.

“We are very committed to driving the bridal digital revolution,” said Ohayon. “At the end of the day, it’s a lot of small players in bridal. They don’t understand how Google search works and the algorithms on social networks. We do, and we can make the bride’s [shopping] process more seamless.”

Pronovias recently launched online booking for appointments at its own stores and those of its wholesale partners, which include Nordstrom and Kleinfeld. The ecommerce shopping experience has also been updated, allowing brides-to-be to view dresses on bride’s in lifestyle settings, rather than white backdrops.

The company is now developing its presence on Instagram and Pinterest, knowing the latter especially is a big source of inspiration for U.S. brides, more so than in Europe. Finally, it’s working to expand its offerings in the name of offering brides more convenience: It recently launched special occasion dresses, which include options for bridesmaids and mothers of the bride, and Ohayon is exploring partnerships with hair, makeup and accessories brands. “It just makes sense,” she said.