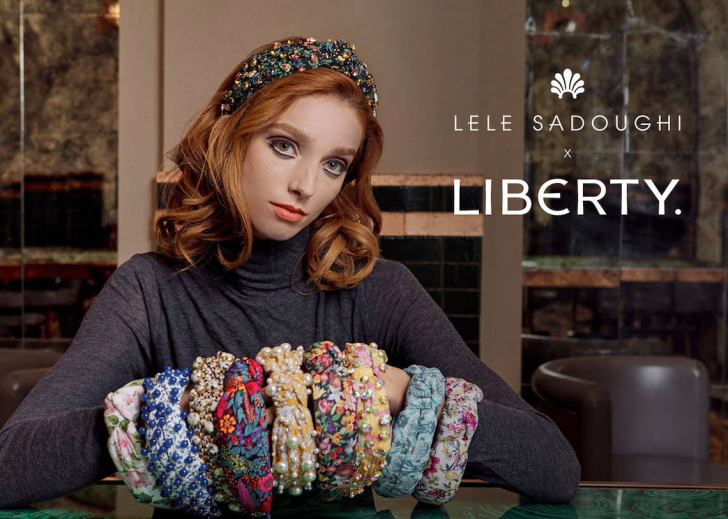 Lele Sadoughi, the 10-year-old accessories brand, is in expansion mode.

After two consecutive years of 100% revenue growth, the company is now moving up projects planned for further down the road, said its founder, Lele Sadoughi. Specifically, the second Lele Sadoughi store is opening in California in May, one year after its first store in Dallas. And the company plans to open six more in the next two years accelerating initial plans by more than a year. Brand expansion is coming, too. While the brand is best known for its headbands, it will be introducing handbags in March and demi-fine jewelry in April.

A big surge in online sales drove the bulk of the growth over the last two years, although the brand declined to offer specific revenue figures. But now with a strong online presence in place, new stores and new categories are the keys to fueling further growth, Sadoughi said.

“Stores are the most exciting part,” Sadoughi said. “Our first store in Dallas performed better than any of our expectations, and it was really helpful in boosting our online sales in the area. It doesn’t cannibalize them at all.”

Sadoughi said, for much of the brand’s existence, sales were evenly split between DTC and wholesale through partners like Neiman Marcus and Nordstrom. During the pandemic, the balance shifted considerably to be more than 70% direct. That ratio has held as the brand opened its first store. Sadoughi said the direct side of the business, bolstered by new stores, is the side of the business with more potential.

“On the wholesale side, we are where we want to be already,” Sadoughi said. “We have good partnerships with the retailers we want to sell with. I’m happy with that side of the business. But direct has a lot more opportunity for growth.”

Two of the six stores planned will open this year, and the brand is focusing on the East Coast. Sadoughi said that, even with just one store, direct brick-and-mortar sales already make up close to 10% of total sales. The Dallas store is in Highland Park Village, an outdoor shopping center. Sadouhgi said, for future stores, she’s looking at similarly curated shopping centers. “We would get lost in a big shopping mall,” she said.

As for new categories, Sadoughi said being an accessories brand gives her freedom to be creative.

“At a lot of big companies, accessories are kind of an afterthought,” Sadoughi said.”When I was at J.Crew [where Sadoughi helped launch its first jewelry collection], no one was paying attention to the accessories department, so I could kind of do whatever I wanted and try a lot of new things. I wanted to bring that energy here and just try lots of different accessories, but make them all feel like they belong together.”

In addition to bags and demi-fine jewelry, Sadoughi said she and her team are currently developing categories including phone cases and, potentially, more athletic-focused accessories.

The latter is especially interesting to her. In 2021, the brand had a collaboration with swimwear brand Solid & Striped that included headbands made from swimsuit material.

“People will pay a lot for comfort,” she said.