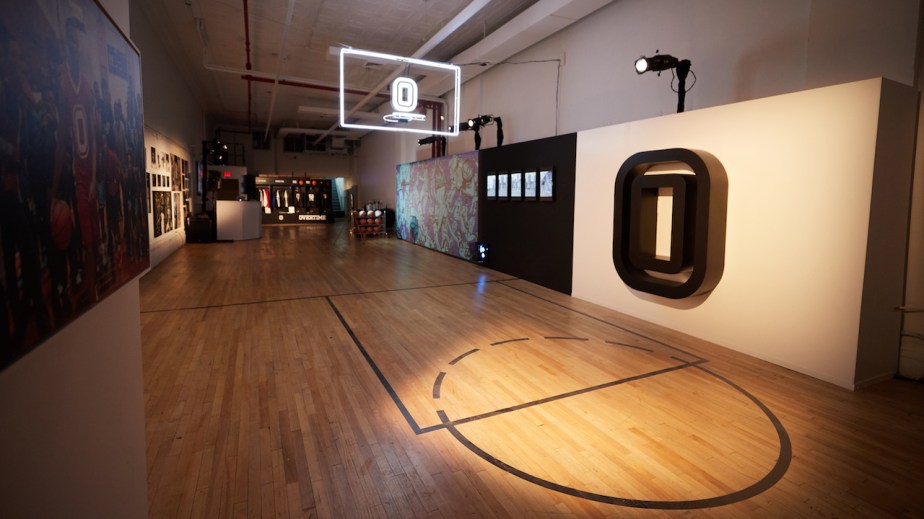 When digital sports media company Overtime was first co-founded by Dan Porter, the team would get frequent requests from its young audience wondering where to get T-shirts with the O logo on the front. These shirts were not for sale and had been made just for the company’s employees, but eventually demand became so significant that Porter relented and began selling Overtime-branded apparel.

“We liked that people wanted to be a part of the brand,” said Porter. Some of Overtime’s customers have gone so far as to send him a direct message on Instagram with videos of them playing basketball and asking to be featured on Overtime.

Today, Overtime is hosting its first-ever retail pop-up shop, with a store in New York’s TriBeCa that will carry its brand apparel alongside three collaborations over the weekend. Artist Sierato, sports entertainer Rachel Demita and Japanese streetwear brand Suicoke all collaborated with Overtime’s creative team on collections of apparel from T-shirts and sweatshirts to footwear that will be available for sale (except for the Suicoke sandals which will on display but not releasing until this summer).

It has already become apparent that changes in the fashion industry have meant that brands are now competing across price points. As apparel from non-traditional companies begins to become more popular and mainstream, thanks to offering heightened personal style (for example, any hypebeast could be seen wearing a Coca-Cola shirt), fashion brands will also have to worry about competition from companies outside of apparel altogether. Additionally, the crossover between sports and fashion has become larger every month, with professional athletes taking on the role of fashion influencer.

But Porter is hesitant to say that Overtime is becoming an apparel company, only because he views the sale of Overtime clothing as merchandising, rather than full-on apparel.

“If people ask me what I do, I don’t tell them I run a media company,” Porter said. “Media is part of it for sure, but so is connecting with people in real life. The Lakers don’t sell apparel, they sell merchandise. People want to buy Lakers stuff and show their love for the team. We want to do the same thing. We have an engaged audience, and we want to give them ways to show their engagement with us.”

Processed with VSCO with 7 preset

For Porter, Overtime’s apparel is less about looking good or being aesthetically pleasing on its own and more about giving customers the chance to show their loyalty to and association with the brand. Overtime reports 35 million visitors per month.

The line between merchandise and apparel is a thin one, but can be distinguished. Earlier last year, Japanese streetwear brand Fragment debuted a collaboration with Pokémon that played off the nostalgic cultural cachet that Pokémon has among the target audience for Fragment in a way that ultimately serviced the aesthetics of the apparel. Meanwhile, another Japanese streetwear brand A Bathing Ape debuted last week a collection themed around the new animated film “Ralph Breaks the Internet.” Whereas Fragment’s collection was not tied to any sort of release and used the Pokémon imagery toward its own ends, Bape’s new collection has a much more promotional feel and is closer to merchandise.

There’s no shortage of media companies who make not-insignificant amounts of money off of their apparel sales. These sorts of efforts can range from the temporary and experimental, like Bleacher Report releasing a collection of jerseys, to the more traditional and permanent, like Upworthy launching a fashion brand called PSA Supply Co. Bleacher Report has even begun spinning its B/R Kicks project into a full-blown franchise.

For Porter, Overtime is not trying to make a big splash in the fashion industry. He believes the brand’s apparel is just a way to keep people engaged with the company and its content. At the same time, the company’s apparel sales have been successful enough (though Porter did not provide exact numbers) to warrant their first retail pop-up with apparel being a major element of the experience.

“Fifteen years ago, people wore shirts that had sayings on them or graphics or whatever,” Porter said. “But now people just wear shirts that have brands on them and they choose certain brands to say who they are: ‘I’m a hypebeast’ or ‘I’m a sports fan’ or whatever it is. For us, that’s why we put a lot of effort into our brand, and it’s why we want to give people a way to express themselves.”