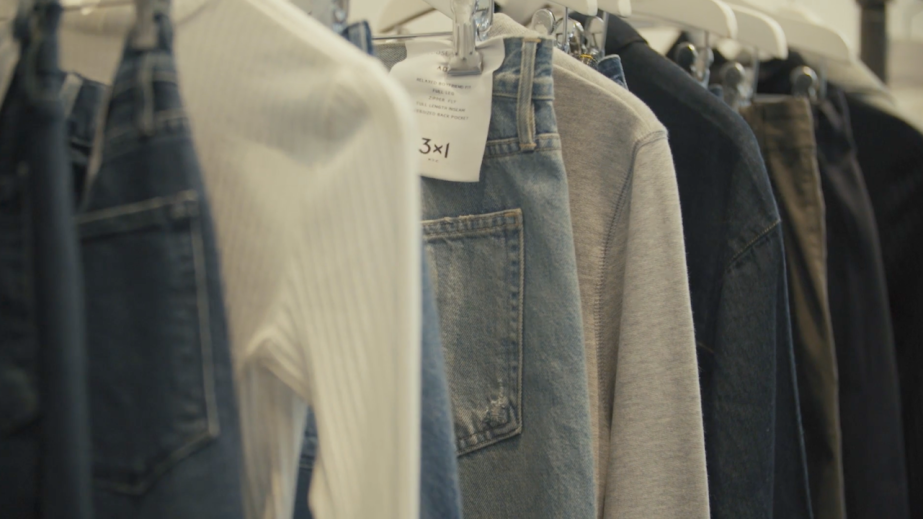 ‘How did we get here?’: 3×1 aims to course-correct the denim industry with new documentary series

Three minutes into episode one of “Common Thread,” the denim-focused documentary conceived, co-produced and co-funded by 3×1 founder Scott Morrison, focus turns to a series of signs in store windows and standalone fixtures in SoHo in New York: “Denim Buy One Get One 50% Off,” “Jeans On Sale Starting at $19.99,” “Levi’s Sale 50% Off.”

“How did we get here?” asks Morrison, the video’s narrator.

The scene is a sharp contrast to Morrison’s 3×1 store and atelier, located a block away, which makes custom and bespoke styles, houses the largest selection of selvedge denim in the world, according to the brand, and sells jeans for upward of $250.

Morrison, who also started denim brands Paper Denim & Cloth in 1996 and Earnest Sewn in 2004, is one of many fashion veterans who built a brand based on quality and craftsmanship and is now working to navigate an industry fueled by fast, cheap products. For Morrison, that has translated to the “Common Thread” documentary series, a passion project examining the history, state and future of the denim industry through the eyes of the industry’s pioneers.

“What we’re really trying to focus on is: What are the pieces of the puzzle that have informed where denim is today, and who’s really driving that from a brand and supply chain perspective?” said Morrison. “At the same time, we’re trying to understand: Where are we going? And how are [established brands] dealing with change and transforming their businesses?”

The series, which has been in the works since November, was also inspired by a Denim 101 training session 3×1 hosts for new employees, most in their early 20s, that focuses on the history of denim and 3×1. Morrison said, for the most part, young hires are in the dark about significant industry moments that have inspired him throughout his career, including the start of Japanese denim in the early ’90s and the birth of American premium denim in 2000. What’s more, they haven’t realized the “integrity and tradition” of the industry, which he has grown to appreciate by, for example, visiting the leading denim mills over the years. He assumed their degree of knowledge and appreciation reflected that of the general public, which put the wheels into motion.

3×1 is not the only fashion brand aiming to get its message out through a large-scale video production, rather than fight for attention in traditional marketing channels. Most recently, Chanel offered an inside look at the lead-up to its spring 2018 haute couture runway show in an episode of Netflix-produced documentary “7 Days Out,” released in December.

Morrison’s objective at the onset was to make three editions of a documentary exploring the cities that made five-pocket denim a staple, through the lens of the local culture — Italy first, followed by Japan and America. Rebecca Schwartz, 3×1’s communications director, described the concept as “‘Chef’s Table’ meets ‘Anthony Bourdain [Parts Unknown]’ meets fashion.” Episode one, for example, features a range of Italians, from Franceso Dallo Rovere, president of Sinv Holding, an owner of local fashion brands including Moschino, to Umberto Sereni, CEO of century-old winemaker Acetaia Sereni. The latter was meant to highlight the virtues of multi-generational businesses in the region and how they’re evolving.

The Italy episode debuted on Thursday evening, through three private screenings at Brooklyn’s Wythe Hotel for family and friends of involved parties, including production studio Convicts and featured brand Diesel. The 25-minute video went live on Convicts’ YouTube channel immediately following the screenings, and all featured brands drove to it in social media posts. For its part, 3×1 sent a dedicated email to its shopper base, featured the video on its website and hyped the launch on its social channels, including through a link in its Instagram bio.

Stefano Rosso, CEO of Diesel North America, who — along with his father, Renzo Rosso — led a tour for “Common Thread” of Diesel’s headquarters in Breganze, Italy, said he agreed to participate in the documentary at first mention and had no concern about collaborating with another denim brand.

“Like Scott, I want to share how amazing it is, what we do every day,” said Rosso. “The documentary really shows the amount of work that goes behind every single pair of jeans, all the science and the knowledge and work. I always say, ‘We don’t make denim prints, we make denim paintings.’ Every single item is like a piece of art, and people need to see that to understand that.”

In October, Morrison and Convicts will head to Japan for seven days to produce the second episode, and they’ll shoot the America episode by year’s end. Schwartz said eventually shooting 10 to 15 episodes in different locations would be doable, considering, for example, the stretch denim industry in Turkey and the denim manufacturing happening in Vietnam. But where the project goes in 2020 is based on how the videos take off. A goal is to prove the series’s demand and get it picked up by Netflix or Hulu, which would then take on the heavy lifting of producing and marketing the project.

Schwartz said production costs for episode one were shared by all companies involved — Rosso said Diesel “participated in the budget, but nothing extraordinary” — and 3×1 has plans to put paid marketing behind its promotion, across digital channels.

Morrison said the episodes are “certainly not” intended to be brand videos or 3×1 marketing pieces, but they are meant to position 3×1 as a denim expert. “I wouldn’t say I’m a gatekeeper to the industry, so to speak, but I have a little perspective,” he said. “There are a lot of things we’re not doing as well as we could, and some lessons may be learned by looking backward and understanding the path. That will help us set the groundwork for the future.”