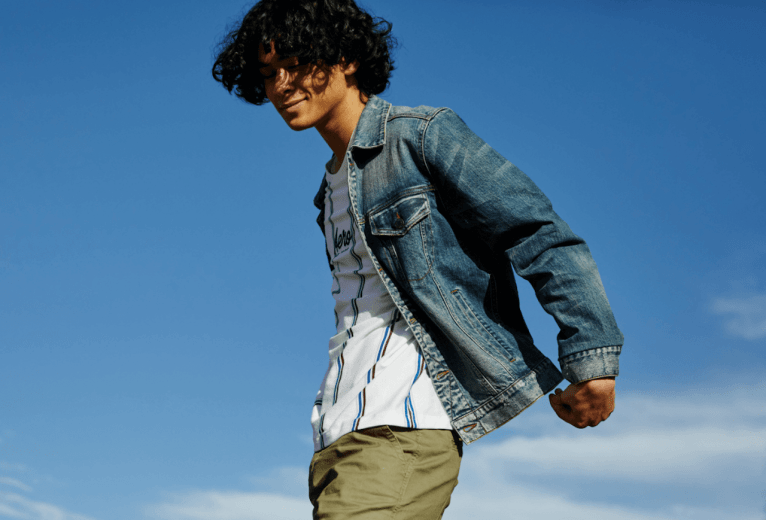 Five years after bankruptcy, Aeropostale and parent company ABG have slowly been working to turn the brand’s prospects around, starting with a renewed focus on the Gen Z consumer. Thanks to a focus on denim and some timely virality on TikTok, the brand is in a much better place now than in 2016.

Aeropostale’s back-to-school product assortment, which launched on Monday, is heavy on denim, with a variety of new fits and washes in men’s and women’s. According to Natalie Levy, president and chief merchandise officer at Aeropostale’s parent company SPARC, denim was just a small part of the business when she joined the company in 2017. The sales ratio for tops-to-bottoms was three-to-one, with graphic tees being the biggest selling item. Now, denim is the brand’s No. 1 category, with current sales 50% higher than in 2019.

The focus on denim was a strategic decsion, after several years of market research, said Levy. Aeropostale has been tracking Gen Z’s growing disinterest in skinny jeans, which were incredibly popular with millennials. Mom jeans, baggy jeans and “skater jeans” — all looser fits — make up 40% of Aero’s jeans sales for women, while jeggings largely account for the rest. Last year, it only sold one looser fit for women — the boyfriend jean. It accounted for just 7% of total denim sales in the category, which shows the sudden shift in trends.

According to Levy, denim is one of the best examples of how fashion trends and tactics that worked on older generations need to be tossed out when appealing to Gen Z. The younger consumer has very different tastes in the fit and function of what they wear, plus they have different media consumption habits that make traditional marketing methods less effective. Instead of highly produced content and engineered campaigns on Instagram, for example, Levy said unplanned moments on TikTok have driven much of Aeropostale’s success with Gen Z in the last year.

“Our ‘tiny tops’ absolutely blew up on TikTok,” Levy said, referring to the wave of posts about the brand’s crop tops that started in April. “Millions of hits. But it was kind of just random. You can’t predict when it will happen, but you can support it after the fact.”

The “tiny tops” hashtag exploded on TikTok in April, with more than 500 videos posted. While the hashtag was not limited to Aeropostale — other brands like American Eagle and Targets were also highlighted by the trend — Aero did see a big bump in TikTok engagement. There were more than 33 million mentions of Aeropostale associated with the trend. Most posts are by women, who make up 60% of Aeropostale customers.

Levy said the engagement came from simply sending product to TikTok users, including Lexi Hidalgo (1.6 million followers), who did clothing haul videos. No paid promotions or endorsements drove the trend. Since last year, Aeropostale’s sales of tiny tops have tripled. Levy said store associates have reported customers coming into stores and asking for “the TikTok top.”

Levy said that when her social team realized “their phones were blowing up,” they pivoted to supporting the trend by posting more TikTok content focused on tiny tops and sending more of the style to influencers.

The surge in denim and tiny-top sales comes barely five years after the company filed for bankruptcy. In 2016, Authentic Brands Group purchased Aeropostale out of bankruptcy for $240 million. Marc Miller, CEO of the joint venture SPARC, made up of ABG and Simon Property Group, set off to turn the brand around.

ABG CEO Jamie Salter told Glossy in January that there’s a simple process for turning brands around that he enforces: Figure out who the target customer is and follow their lead.

“I look at Comscore data and everything, and that’s helpful. But really, what you need to look at is: How much is our target consumer buying, and what are our margins?” Salter said. “If we’re not selling enough to the people we want to sell to, we have to do something different.”

While ABG does not break down the revenue of its brands individually, the entire SPARC portfolio, which includes Nautica and Eddie Bauer, among others, will bring in an estimated $8.6 billion in global retail sales 2021.

To that end, Levy said the last few years have been vindicating for that strategy.

“I love seeing young Gen Zs on TikTok posting about Aeropostale,” Levy said, referring to posts like this one from Lexi Hidalgo to her 1.6 million followers, saying she was “obsessed” with Aero’s clothes.