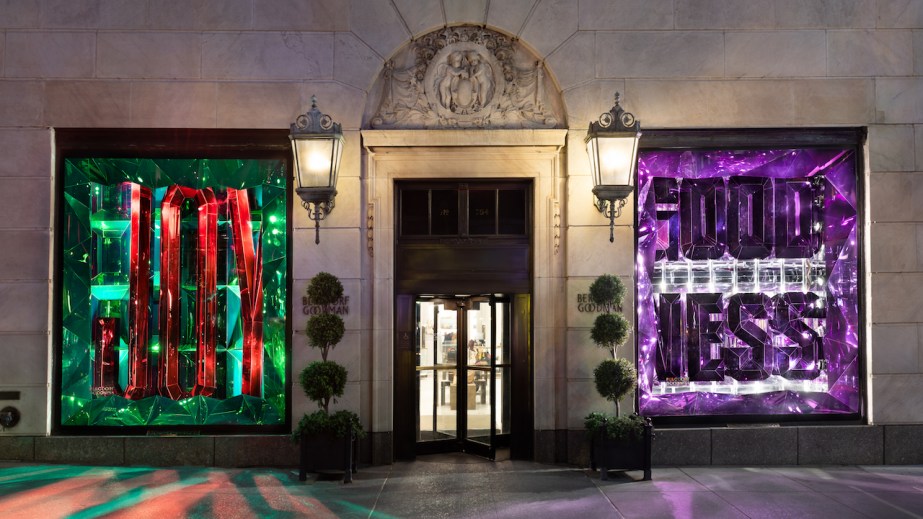 How 5 department stores updated their holiday window displays for 2020

This story is part of our week-long series on the strategic trends among fashion and beauty brands for holiday 2020.

For holiday 2020, department stores ensured their NYC window displays spoke to the unprecedented year that was, while also appropriately sparking some much-needed happiness.

While some retailers lucked out and were able to stick with original window plans, established as far out as a year in advance, others deemed it necessary to overhaul imperfect plans. Social distancing guidelines proved obstacles for construction crews, which can be up to 100-people strong. And, as opposed to the usual, foot traffic-driving IRL events, reveals of displays had to be carried out virtually.

But executives from every store interviewed for this story agreed that skipping the tradition this year was not an option. Along with delivering joy to passersby, they said, their holiday windows also provide a sense of normalcy.

Bergdorf Goodman
Linda Fargo, Bergdorf Goodman’s svp of fashion and director of store presentation, said the retailer’s holiday windows for 2020 “reflect the circumstances we find ourselves in.” That’s despite that the company’s overarching holiday theme of “Bergdorf Goodness,” centered on a season of giving back, was established back in January.

What did change were the charities the company planned to support, which evolved to “reflect the dire crisis of diversity and equality, as well as food insecurity,” said Fargo. Partners include City Harvest and the National CARES Mentoring Movement. And the windows’ presentation shifted away from the complex scenes for which the retailer is known, in favor of providing a more streamlined focus on Bergdorf Goodman’s core values, including love, hope, harmony, joy and equality.

How the windows were executed also required new considerations. “In most years, we have a beehive of artisans sewing, gluing and building all the complex elements that go into our elaborate windows,” said Fargo. But, in the name of prioritizing the team’s safety, sets were pre-built, and window director David Hoey oversaw designs and operations remotely.

“What was non-negotiable was that we would continue the great tradition of our windows, even if there were less people on the sidewalks,” said Fargo. “We felt it was imperative to bring some light and joy to the city, and the world.”

Bloomingdale’s
For this year, the holiday windows of Bloomingdale’s 59th Street flagship were inspired by its “Give Happy” campaign, meant to highlight “positivity and togetherness” at the close of a challenging year, said John Klimkowski, Bloomingdale’s senior director of central visual merchandising in New York City. As such, one color from the campaign is featured in each of the retailer’s windows along Lexington Avenue. Featured objects include “marquee hearts, larger than life dogs and giant snowflakes,” to communicate “a simple message of cheer,” he said.

Necessary adjustments to the usual plan included eliminating the interactive, “touch” components that have become standard features of the store’s windows. Instead, two of the windows emanate holiday scents of evergreen and peppermint. To further their sensorial impact, the windows also feature mirrored edges for an “infinity glow effect,” said Klimkowski.

In addition, the retailer’s traditional window unveiling event in NYC was replaced with a virtual holiday benefit supporting the Child Mind Institute, on November 23.

“People are looking for a little escape or lift, and our windows can give them that,” said Klimkowski. “They also provide a sense of normalcy, as they’re a tradition that people look forward to every year.”

Saks Fifth Avenue
Saks Fifth Avenue set its holiday theme of “This is How We Celebrate” nearly a year before launching the corresponding windows of its NYC flagship, said Emily Essner, Saks’ CMO. The intention was to shine a light on the importance of spending time with loved ones and the way different people and places around the country celebrate the holidays. “We knew it would resonate even more, after several challenging months for New Yorkers and those around the world,” she said.

The resulting six windows were designed to bring different, quintessential NYC moments to life, from a musical celebration playing out in Times Square to a young dancer getting an autograph from a ballerina. Both in-store and window displays feature designs by brands including Dries van Noten and Alexander McQueen, along with elements like Mylar-wrapped trees and scattered musical instruments.

In place of holding a large in-person event for the windows’ unveiling, the company is hosting multiple livestreams of the displays, hosted by celebrities like Alex Rodriguez. Each benefits a charitable cause, such as Madison Square Boys & Girls Club. Saks is set to donate $100,000 throughout the holiday season to non-profit organizations serving NYC and beyond.

“We like to think of our holiday windows as our annual gift to [the city],” said Essner. “This year, we felt it was more important than ever to uphold this tradition. We hope our windows will deliver fun and escapism this season.”

Macy’s
Macy’s holiday window displays have been a tradition at its 34th Street flagship since 1874. This year, they’re meant to read like a thank-you letter to “first responders, essential workers, marchers for equality, and New Yorkers who showed their grit, good humor and hopeful spirit during a tumultuous year,” said Manuel Urquizo, Macy’s national windows director.  The windows’ official theme is “Give. Love. Believe.”

Typically, Macy’s holiday window displays take nearly nine months to complete, from concept to execution. In their pivot to honor New Yorkers, Urquizo and his team produced the windows in half the time. That team included Macy’s display , graphic and sculptural artists, as well as animators, carpenters, electricians and lighting experts.

Indeed, seasonal fashion trends made their way into the design; polished-plaid and high-shine metallic styles are featured.

Nordstrom
Nordstrom’s NYC flagship store doesn’t have the boxed-in display windows that are common among department stores; instead, its entire facade is one large window in the seven-floor store, which opened in October 2019. Since Black Friday, red and white lights have illuminated the glass facade and provided a blinking light show for locals still in town.

Nordstrom has “a 119-year tradition of celebrating one holiday at a time,” said a company spokesperson, explaining the post-Thanksgiving decorations debut.

A crew of nearly 100 Nordstrom team members worked overnight starting on Wednesday, November 25 to transform the 320,000-square-foot interior, much of which is visible from the outside. Added seasonal decorations included 253,000 feet of twinkling lights, over 700 Scandinavian-inspired ornaments, 150 trees, 150 hanging chandeliers, seven 11-foot nutcrackers and a vintage sleigh, among others.

“To invite customers into the store to shop, we want to connect the shopping experience in-store to the energy of the city,” the spokesperson said.