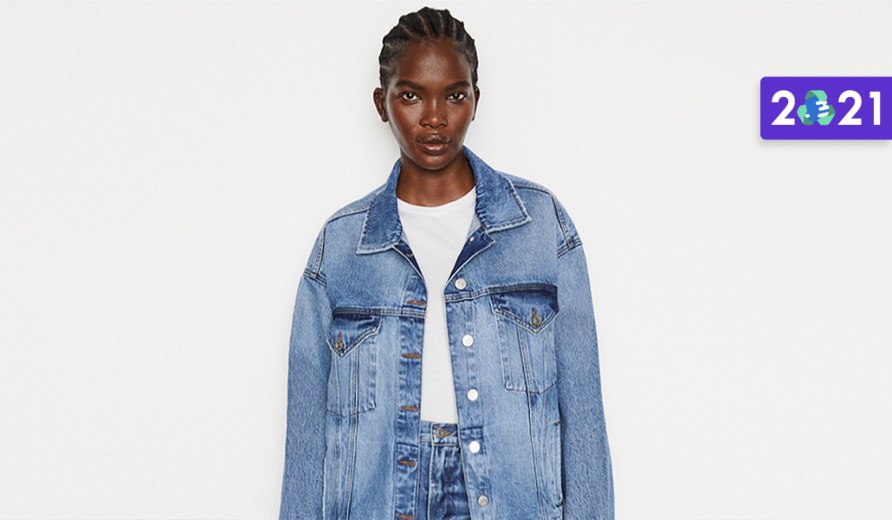 This story is part of Glossy’s Earth Week series, which spotlights sustainability efforts and topics across the beauty and fashion industries. You can read our other coverage here and here.

After years of making moves to become more sustainable, Frame is ready to hold itself accountable.

On Thursday, the company will launch a circular denim capsule collection, designed as part of the Ellen MacArthur Foundation’s Jeans Redesign project. It’s Frame’s latest step in the last two years centered on integrating more sustainability into its products and operations. The company has so far remained relatively mum about sustainability and has focused on progress versus formalities. But it’s ready to map out official goals and be more vocal about its prioritization of conscious processes, to some extent.

“It’s time to put that into words and articulate what role we want to play in the future,” said Jens Grede, co-founder of Frame. “We’re not perfect; we can do better. And it’s important for our people to do the right thing and to have something to work toward.” He was quick to clarify, “It’s about defining our ambitions, versus finding a marketing message.”

To start, Frame has outlined the “Four Pillars of Responsible Washing,” defining its production standards for sustainable denim. By 2022, 80% of the brand’s products will be “sustainably made,” said Grede, noting the strides it’s made.

The company has been working to clean up the production of products in each of its four core categories: denim, leather, cotton and cashmere. In 2019, it launched a sustainable denim collection using 85% less water than the industry standard, as well as recycled cotton and post-consumer recycled bottles. And late last year, it shifted to what it calls “responsible leather,” allowing for traceability that ensures, for example, the ethical treatment of animals. It also offers a recycled cashmere line, makes its T-shirts with organic pima cotton, and uses bluesign-certified silk that’s free of harmful chemicals and dyes. That’s not to mention that Frame specializes in classic styles that can be worn for years.

“We’ve worked very hard to establish a supply chain and a factory base that can meet the environmental standards of the future,” said Grede. “We’re also working internally to retrain our people to think about sustainability first and ensure every single step in the supply chain is the best it can be.”

In addition, Frame has a partnership with ThredUp that promotes resale to Frame shoppers, and it donates surplus inventory to a company that makes insulation for low-income housing. “Frame doesn’t send anything to landfills,” he said.

The new circular denim collection includes two pairs of jeans priced at $258 and an oversized jacket for $378. Made according to the Jeans Redesign’s “stringent requirements,” each piece features 100% cotton, post-consumer recycled materials and easy to remove metal hardware, said Grede. “This is as close as you can get to a fully circular garment,” he said.

Launched in 2010, the Ellen MacArthur Foundation charity works to accelerate the transition to a circular economy. Its Jeans Redesign project, launched in 2019, is aimed at educating brands and, in turn, eliminating the harmful processes often involved in denim production. Along with Frame, brands including Gap, H&M, American Eagle Outfitters and Reformation are taking part in the crash course of sorts. It’s set to wrap in May 2021, after each brand takes a collection that meets the initiative’s standards to market. The same month, Ellen MacArthur Foundation will release on its website a report featuring case studies and common themes, including challenges, identified by the 70-plus participants.

“In a circular economy for fashion, products are used more, are made to be made again, and are made from safe and renewable or recycled materials,” said Laura Balmond, who heads up Make Fashion Circular at the Ellen MacArthur Foundation. The Make Fashion Circular initiative brings together fashion industry leaders to drive collaboration and innovation around circularity. “We learned that many organizations had a challenge breaking this down into clear actions that would see all three principles applied at the same time. The Jeans Redesign has given us a starting point to collaboratively learn what it means to design for a circular economy.”

For Frame, the hope is that the exercise will result in the company being more “circular-minded” and making smarter production decisions, said Grede. “We also hope that the success of this partnership will serve as a halo and a lighthouse, pushing our competitors to do even better,” he said.

The denim industry could certainly benefit from a united effort to change for the better. Denim’s earned a reputation as the most polluting garment, thanks to the vast amount of water and chemical dyes notoriously used by denim factories.

But sustainable versions still come with a price. Frame’s circular styles cost just $10 more than their non-circular counterparts, but Grede said that difference dissuaded retail partners from buying into the new collection.

“With all of these [advancements], the more that people use them, the available they will become and the more affordable,” he said.

The pieces will be sold via Frame’s direct channels, including its e-commerce site and 20 stores. It’s now a “predominantly direct brand,” said Grede, noting that its e-commerce sales grew more than 200% in the last year. He declined to share the company’s overall growth and revenue, but it reportedly pulled in more than $130 million in revenue in 2018. Marketing will be through the brand’s go-to influencers and photos produced in-house that will be posted across digital channels and ads. Store signage and associates will also promote the line — but, across the board, the focus will be on the clothes versus how they were made, said Grede.