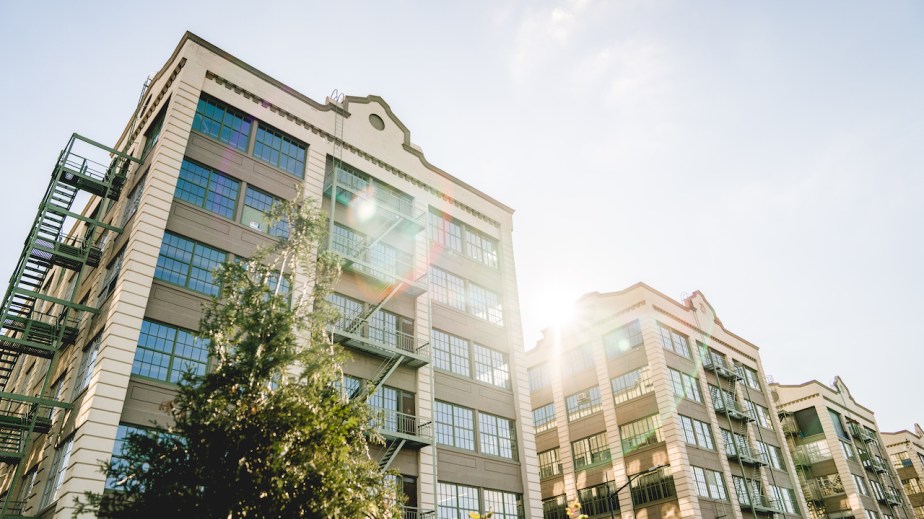 The fashion crowd is flocking to Brooklyn.

Though fashion brands and retailers are newly debating the need for physical office space, along with physical retail, Brooklyn’s expansive Industry City complex is ticking all the boxes for reasons to go all in. Young startups to established industry leaders are increasingly moving into the space, sold on the creative, collaborative atmosphere, the capability to grow within its confines and the smorgasbord of resources available on-site. The accessibility, safety measures and flexible leases it offers are among other driving factors.

“You get both the grit and the glamour here,” said Andrew Kimball, CEO of Industry City. “As for the grit, you can make [the product], you can ship it, you can warehouse it. The glamour is in the outward-facing type of spaces, where brands can host a customer or client and show [the product], whether that’s in a showroom or a retail space.”

Owned by Belvedere Capital, Jamestown, and Angelo Gordon & Co., Sunset Park-based Industry City encompasses 16 buildings with a combined 6 million square feet of space and is set on 35 acres. After serving as a manufacturing and distribution hub then sitting dormant for 50 years, it’s been undergoing redevelopment since 2013. The owners have invested over $450 million into the property and leased more than 4 million square feet of space to 575 companies, which together bring in 8,500 local workers. Four hundred of the companies occupy less than 2,000 square feet of space for 10 employees or less.

In the last nine years, more than 60 fashion companies have become tenants, now accounting for more than half a million square feet, or 10%, of the complex. They use their spaces for various purposes that, together, encompass the entire fashion supply chain. For example, Peter Do has a design studio, Tailored Industries does 3D knitting manufacturing, and Stoney Clover Lane now operates a 40,000-square-foot warehouse, after outgrowing a 25,000-square-foot space on the premises. Meanwhile, 5-year-old accessories brand Ashya has a physical sales floor via the immersive Makers Guild, where the creative processes of 12 brands are on display for visiting shoppers. Cuup, Loeffler Randall and Gap are among brands with content creation studios on-site. Other tenants include Moda Operandi, Pyer Moss, Rag & Bone and Noah NYC.

“We really wanted to feel like we were getting a lot out of our budget,” said Sonia Mosseri, co-founder and creative director of Still Here. “And whatever money we put into Industry City, it’s coming back to us tenfold through the amenities and the overall culture.”

For two years, until June 2020, the 3-year-old company operated out of an office in NYC’s Midtown. It spent the summer in a New Jersey location, before shopping spaces in Manhattan and Dumbo and selecting Industry City.

“It’s an encouraging work atmosphere, with freelancers and big executives coming in every morning and working hard,” she said. “Especially coming out of Covid, we were craving that.”

Valuable contacts Mosseri has already made include the founder of sake brewery Brooklyn Kura – the two are planning to collaborate on future events – as well as a botanist that makes natural dye, with whom she’s discussed a dyed denim collab. Mosseri has also connected with Sandra Makarem, founder of kidswear company The Collective Child, who has a space across the hall.

In addition, Still Here has become a member of the on-site co-working space, Camp David. It hosts happy hours, which Mosseri and her team have attended, and houses a photo studio that Still Here plans to use on a regular basis. From time to time, for team building, the Still Here team heads to Camp David together to grab a beer. Camp David and other Industry City companies offer discounts to fellow tenants.

“We all just want to help each other,” Mosseri said of Industry City companies.

Mosseri noted her desire to cultivate a community around Still Here ahead of opening its first retail store, in Manhattan this spring. That includes bringing customers to Industry City for events – whether with Brooklyn Kura or at the Still Here showroom – and inviting them in to try-on jeans. On its Shopify site, the company offers a pick-up in-store option, directing shoppers to the showroom.

Still Here’s business has “grown exponentially” since March 2020, with its e-commerce sales increasing from an insignificant portion of the business to 30-40% of total sales. said Mosseri. The new headquarters houses the e-commerce inventory, as well as product samples. Fulfillment and customer service are also carried out on-site. The space has areas for everyday work, with desks, and an open showroom space that will host market appointments.

“We’ve been talking about convincing Industry City to invest in a [denim] washhouse here,” Mossei said, noting that only the company’s production is done off-site, in denim capital L.A.

Still Here’s 10 employees and freelancers stagger their schedules, so no more than four people are working in the office at the same time. Even so, Mosseri said that the company has a good 18-24 months before it outgrows the space.

As Ashya founders Ashley Cimone and Moya Annece can attest, there’s plenty of room to grow on-site. When they were named the winners of the 2019 CFDA Elaine Gold Launch Pad program, supporting emerging talent, they were awarded a one-year membership to Camp David, where they set up shop.

The company took advantage of the space, using it to host events including product launches, sample sales, holiday events and buyers’ appointments. Annece said all were successful, in terms of turnout. She owed that, in part, to the halo of all Industry City retailers marketing their own stores. Many of the events were catered by on-site restaurants.

From there, the five-member Ashya team spent a year operating out of a studio space on Industry City’s fourth floor, before being invited to move into the Makers Guild experiential retail space.

“We hadn’t thought much about opening a store, at that stage of our business,” said Cimone. “But to be able to do it so affordably, it was a no-brainer opportunity.”

The timing was right, as Ashya had just chosen to “trim the fat,” in terms of its wholesale partners, and focus on building up its direct sales, said Annece. Among its remaining partners are Nordstrom, Saks and Shopbop. It also worked to the brand’s advantage that Industry City managed and covered the cost of the store’s buildout, while still allowing Cimone and Annece creative control.

“This doesn’t feel like New York,” said Cimone. “New York feels very much like this rat race, where it’s your responsibility to get in on it. This is much more community-driven.”

Cimone commented on the many tenants who work in production and freely offer up project support and recommendations. Ashya shot most of its latest campaign – for its product collaboration with Michael Kors, released last week – within Industry City’s walls.

“There are almost no boundaries to what we can do here,” said Cimone. Though, much like Mosseri, she noted, “If a manufacturer moved into Industry City, it would be amazing.” Ashya currently manufactures in Manhattan and L.A.

Other tenants that have transferred to larger spaces include Peter Do and West Elm. The latter used Industry City space for storage in 2013, before relocating its design and photo studios to the space. In March 2021, it opened an on-site store, which drove record opening-weekend sales for the company. Other home companies with space on the property include Design Within Reach and ABC Carpet.

Kimball said inbound interest for space has been greater than ever during the pandemic. In the last 18 months, Industry City has leased nearly 900,000 square feet of space to 200 tenants. In the same timeframe, 20 tenants have moved out.

“We worked with our tenants, stretching out payback periods and helping them get access to the PPP loans,” he said. “We’re very mindful of keeping our tenant base intact as much as possible, partnering with them to help them come out on the other side.”

Of the high demand, he theorized that there’s a “countermovement” to the widespread shift to working remotely. “People are ready to get out of their homes,” he said. “They want to get back into a community and be around human beings as much as possible.”

Industry City plays an active role in connecting tenants, including hosting events in its five-acre courtyard. In answer to pandemic concerns, it’s invested $1 million in keeping the outdoor space comfortable and feeling safe, including by installing heaters and tents with good air circulation. That the sprawling Industry City complex is “like a skyscraper laid on its side” is advantageous, he said, as it eliminates any worker or shopper concerns about getting into an elevator. What’s more, getting there is easily bikeable or walkable for a large population of Brooklynites, preventing the need to get on a subway. According to Kimball, 60% of Industry City tenant companies are owned by Brooklyn residents.

For Still Here, working remotely wasn’t an option, considering it’s still young and in development, Mosseri said. But she does appreciate that Industry City is close to her home, as she’s a new mom and can commute in 15-30 minutes. She and her husband, Still Here co-founder Maurice Mosseri, live in Brooklyn and were born and raised in the borough.

Industry City averages 30,000 visitors every weekend, who shop, eat at one of the 40 restaurants or attend an event. For example, in June, Aéropostale hosted an Industry City takeover, with a cotton candy artist, a grass half-pipe installation and a denim bar, among other activations. Kimball said that, as the weekend “energy” attracts higher-floor tenants, hosting events is a key part of Industry City’s leasing strategy.

Prior to Industry City, Kimball served for eight years as president and CEO of Brooklyn Navy Yard, a government-subsidized complex offering many of Industry City’s same perks to fashion companies. Lafayette 148 moved its headquarters and showroom there from SoHo in 2018. In doing so, it cut its rent by two-thirds, allowing it to invest in opening stores.

Comparing the two, Kimball called Industry City a “more porous campus” than Brooklyn Navy Yard, which is “sealed off from the broader community” via security gates.

Kimball estimated that Industry City is 75% built out, with the buildings closest to the subway being 90% occupied. Within five years, he said, the tenant count will be close to 1,000. As for shorter-term goals, he said, “If we  can match or exceed what we’ve done in the last 12 months in the next 12 months, I’ll be very happy.”

More fashion brands will no doubt be among those moving in. Along with brand word of mouth, which has so far worked to bring in fashion brands, increasing on-site projects are helping to spread awareness. Non-tenants that have held photoshoots at Industry City include Marc Jacobs and Vogue. Plus, it wouldn’t be surprising to see Industry City turn up on the official New York Fashion Week calendar.

When asked about Industry City’s affiliation with the CFDA, considering Ashya’s path to the complex and the presence of CFDA darling Peter Do, Kimball said, “We’ve got some things cooking and expect to do more with them in the future.”

He added, “We have some great event spaces, and we used to host Brooklyn Fashion Week here. We expect to do more around fashion and runway shows in the future. Our buildings are particularly well suited for that.”

How Ariane Goldman built Hatch from the ground up.

The laws of fashion are changing, literally.

Nordstrom is making a habit of hiring from fashion media.

Casualwear is still dominant on Amazon.