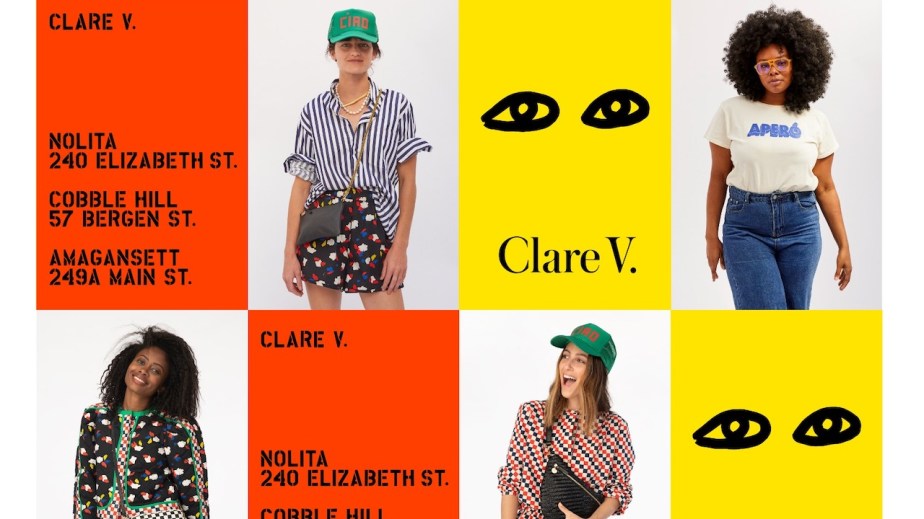 Fashion Briefing: It’s moving day for brands rethinking the purpose of the store

As e-commerce booms, stores merely serving as points of sale are losing their luster. So fashion brands, looking to better engage customers by telling a more complete brand story, are fleeing existing stores in favor of new spaces — sometimes across the street.

Clare Vivier, founder and designer of 14-year-old Clare V., best known for bags, said the end of a lease marked an opportunity. At the end of May, the company packed up and relocated its NYC store in Nolita from 239 Elizabeth Street to 240 Elizabeth Street. At 900 square feet, more than double the size of its predecessor, the new digs are better suited to the brand’s evolution and objectives, as well as its customers’ behavior. Unlike in 2013, when 239 Elizabeth opened, Clare V. is more than just handbags.

Alex Mill and Billy Reid are among other retailers that have recently relocated stores for similar reasons.

Los Angeles-based Clare V. is in growth mode, most outwardly obvious in its recent category expansion. Vivier is also expanding the company’s leadership team and store footprint. In step, increasing the overall focus on storytelling has become a bigger priority, she said.

During the pandemic, when demand for the brand’s handbags dropped off, sales of its apparel — especially sweatshirts — picked up. The company also began producing masks to maintain operations and cash flow. Leaning into sales trends, it began introducing new apparel designs as quickly as possible. It’s since continued to build on the category “in a slow and methodical way,” through capsule collections and 2-3 permanent style additions every season.

“Our customer is clearly ready to go with us on that ride when we really get into clothing,” Vivier said. “Our stores now have the capacity to tell the full story of the brand, and we want to keep the door open to [entering] even more categories.”

The brand recently launched costume jewelry ahead of holiday 2021. In February, it introduced an online resale service via Recurate.

Currently, Clare V. operates 10 stores and a summer-exclusive store in Amagansett, each at 900-1,000 square feet. In the months ahead, it will open a second store in San Francisco and a location in Seattle’s University Village.

Moving to cities with a large existing customer base, in areas that feel “lively,” “community-driven” and, therefore, “very Clare V.” is the focus, Vivier said. “I opened my first store in my neighborhood of Silver Lake [Los Angeles], because I, for one, like to stick around and patronize the local businesses on weekends.”

Like Clare V.’s Cobble Hill, Brooklyn location, a selling point of the “Newlita store,” as the company has dubbed it, was its access to a backyard, offering natural light indoors and facilitating outdoor cocktail parties. Early this week, the store hosted an opening party welcoming Vivier friends including Naomi Watts and Christy Turlington. Clare V.’s Amagansett store regularly hosts pop-ups by brands specializing in complementary categories like home products.

“People getting to know the brand in a visual way is really important,” Vivier said. She noted that Clare V.’s seen “huge success” with in-home marketing. And to promote the new store, it’s running a month-long wild postings campaign for the first time in the states – it’s used wild postings to promote a Paris pop-up in the past. Notably, handbags are missing from some of the included imagery.

Ten-year-old DTC apparel brand Alex Mill is also fine-tuning its physical retail play in Lower Manhattan. In June, it will move its 3-year-old SoHo store from 70 Mercer Street to 75 Mercer. And like Clare V., it’s making the move in step with launching several growth initiatives. For example, it introduced international shipping via its e-commerce site on May 31. Former Gap Inc. and J.Crew Group CEO Mickey Drexler, whose son Alexander Drexler founded Alex Mill, took over as the company’s CEO in July 2021. Alex Mill has another store on Madison Avenue.

Though smaller, the new shop will be spread over two floors, providing a more cohesive flow and better customer experience, according to Alexander Drexler. At the same time, it will allow for greater focus on special products, like collaborative collections.

“[The store] will allow us to bring the brand ethos to life,” he said, adding that its location is a key factor. “We’re a Downtown New York-based and -founded brand.”

Meanwhile, menswear brand Billy Reid is replacing stores to concentrate its physical presence on 10 markets, including L.A. Building a more immersive, omnichannel presence in select areas, versus casting a wide net, is the strategy, said Jeff Zens, president of Billy Reid. He noted that, at the same time, the company is updating its marketing approach across channels to focus more heavily on communicating the brand’s story.

Currently, Clare V.’s revenue is 80% direct-to-consumer sales, with the remainder coming from retail partners including Shopbop, Nordstrom and Anthropologie. It also has a “growing” business via 150 global boutiques, including in Australia and Scandinavia. It once did a significant business in Korea through a retail partner that has since shuttered.

“International sales fluctuate based on where the economy is doing well,” Vivier said, noting that clarev.com ships internationally. “We definitely have untapped markets, when it comes to our wholesale overseas accounts. I would love to get into China and Europe. But we don’t want to be dependent on any big partners.”

That independent focus has been a theme since Vivier bootstrapped the business in 2008. She hired her first employee in 2010 and opened her first store in 2012. She also opened a dedicated Clare V. warehouse close to the company’s L.A. headquarters, rather than ever enlisting a 3PL. Currently, 80% of the brand’s styles are made in Los Angeles.

In 2012, Vivier sold 40% of her business, 33% to Bedrock Manufacturing and 7% to fashion company Steven Alan. Though Clare V.’s been investing in retail, as well as many high-level staffers – including a vp of brand, a vp of design, a director of production and a first-time in-house PR exec – Vivier said she’s not looking to further fundraise, calling raising more capital “an option, but unnecessary.”

And she doesn’t believe the onset of a recession would change that. “I started my brand during a recession,” she said. “It was actually a good thing, because people were wanting something that felt special — founder-driven, and with a point of view and a taste behind it — without being extremely expensive. I hope the same rules apply.”

The last 12 months have served the brand well: Clare V.’s overall handbag business has grown 71% year-over-year, largely driven by sales of crossbody and fanny pack styles. In the first quarter of 2022, the company shipped 70% more products than in the same time period a year before.

Despite Clare V.’s recent price increases, driven by cost hikes within the supply chain, “We’re always going to be an accessible brand,” she said. Opening and expanding stores will certainly help.

On Thursday, Pinterest announced its acquisition of AI-driven fashion marketplace The Yes. The deal will enable the social platform “to accelerate [its] vision for becoming the home of taste-driven shopping,” according to Pinterest. Two-year-old The Yes sells styles by fashion brands from Madewell to Alexander McQueen, and personalizes shoppers’ product selection based on their shared preferences and liked styles.

Julie Bornstein, founder and CEO of The Yes, who also has experience at Stitch Fix, Sephora and Nordstrom, will report to Pinterest CEO Ben Silbermann as the company’s new head of shopping vision and strategy.

Bornstein has a history of working with Pinterest. In 2016, while COO of Stitch Fix, she spoke to Glossy about the company’s Pinterest partnership. It centered on incorporating a selection of Pinterest boards in its signature style quiz to help pinpoint a shopper’s style.

In 2020, just after launching The Yes, Bornstein said social platforms were not a competitor, as people were not using them with the intent to shop. “They’re complementary, as fashion influencers on Instagram are certainly a way people are getting style ideas,” she said. And she described items bought on Instagram as merely “impulse purchases.”

“I had expressed skepticism of social media companies becoming e-commerce companies because the expertise and orientation is so different,” Bornstein said when asked whether her views have changed.

She added, “Now, Pinterest will become the leader because they took the bold step of making an investment in a shopping infrastructure and expert team.”

Fashion brands are collaborating with anime.

A crowd-sourced collection is the first experiment from Ba&sh’s Creative Lab.

Dia & Co. acquired 11 Honoré in an aim to be the go-to retailer for plus-size apparel.