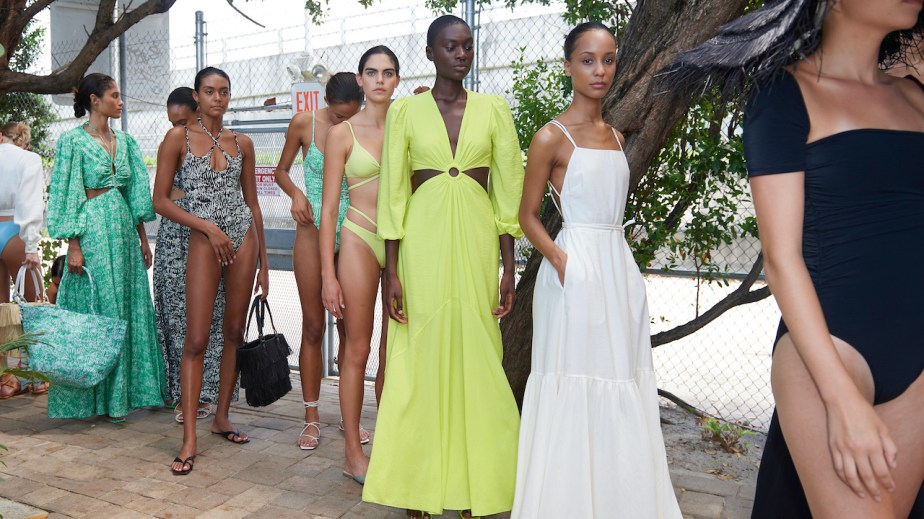 This week, fashion brands get in on emerging IRL events, from Miami Swim Week to UFC 264.

For fashion fans and brands, the pandemic worked to put Miami Swim Week on the map.

Taking place on July 8-11, this year’s Paraiso Miami Beach, widely known as Miami Swim Week, answered the fashion community’s pent-up demand for in-person events. In doing so, it secured a reputation as an effective marketing platform for leading fashion companies.

Brands including Jonathan Simkhai and Simonett took part in the event for the first time by hosting presentations or runway shows. The shows offered them an opportunity to stand out in the increasingly congested swimwear market, both ahead of key trade shows and at a time when traveling is top of mind for consumers. Many shows were targeted at consumers, featuring influencers as models, entertainment beyond fashion looks and see-now, buy-now collections. Meanwhile, other brands hosted event-adjacent activations to tap into the buzz — which, according to insiders, was palpable.

“Brands were dying to come back and do events — do anything,” said Natalija Dedic Stojanovic, creative director at Paraiso Miami Beach. “[The event] got so big that we couldn’t really control it; it was insane this year.”

Dedic Stojanovic said the week typically attracts designers from more than 60 countries and 30,000 attendees. But this was the biggest to date, because far more than the usual 30% of RSVP’d guests showed up and, for the first time, some of the events were open to the public. The overall event played out across nine venues, and each individual event attracted a line of wannabe spectators. Put together, Paraiso’s operations were forced to level up. “We have to grow as a company, and that’s our next step. We’re a boutique production agency, but this is not a local event; it’s serving an international market.”

At around 38, the number of designers participating in the event was comparable to years past — 2020’s event was digital-only — but the mix was new. Miami Swim Week first launched in 1989, switching hands to Paraiso in 2018. Due to international travel restrictions, regulars from the large swimwear markets of Australia, Brazil and Columbia had to sit out. Taking their place were U.S. designers who make swimwear but aren’t known for it, as well as pure-play ready-to-wear brands. The event was live-streamed on FashionTV, a television channel that reaches more than 500 million households worldwide.

Jonathan Simkhai kicked off the week with a cocktail party featuring the debut of his resort 2022 collection. The lineup included swim styles, which the brand debuted in 2016. Simkhai said he opted for an informal presentation versus a runway show, as it aligned with the casual collection and Swim Week’s laid-back atmosphere.

The draw for Simkhai was the timing. “Our runway focus has always been showing the ready-to-wear collections in New York and Paris, but [our swimwear] category has grown significantly,” he said. “It was a great time post-pandemic to create buzz around swim and offer strong resortwear. Just chatting with customers, I could sense that there was a yearning for travel.”

Meanwhile, Miami-based Simonett showed its see-now, buy-now fall 2021 collection — no swimwear in sight. Like Simkhai, prior to Swim Week, Simonett had been focusing on other markets — mainly New York and L.A., in the states — despite its Miami headquarters. According to founder and creative director Simonett Pereira, Paraiso invited the brand to host a show two weeks before the event, on a complimentary basis. (Building up its own fashion cred was no doubt a motive for Paraiso in providing brands with freebies.) The chance to show the fall collection as see-now, buy-now was something she couldn’t pass up, especially as the brand moved to 100% direct-to-consumer during the pandemic.

Pereira also used the show as a content-building opportunity. A photographer was on hand to shoot a recap of the model-fitting process. Meanwhile, backstage, the brand created editorial-style content using a setup reminiscent of ’80s photo studio Glamour Shots. The resulting images and video snippets were featured on the brand’s Instagram Reels and in Stories, along with swipe-ups to purchase the featured products. Pereira said some of the items featured were “near sell-out.”

The Cabana trade show, which specializes in resort and travel wear, typically aligns with the back-end of the event — this year, it took place from July 10-12. Fashion brands regularly in attendance include Jonathan Simkhai, Simonett and fashion essentials brand Tkees.

Simkhai said his presentation prior to the trade show proved an ideal introduction of the collection to buyers. Also in attendance were South Florida brand clients, as well as editors and influencers.

Dedic Stojanovic said the Paraiso consistently hosts editors from publications like InStyle and Who What Wear, and facilitates interviews with designers. “Designers know that our press risers will be packed and they will get ample exposure through major publications.”

Other fashion brands participating in Swim Week for the first time were DTC e-commerce players seeing booming businesses and, thus, bloated marketing budgets due to the pandemic. Fast-fashion brand Boohoo hosted its first-ever runway show at the Versace Mansion on July 10, and sister brand PrettyLittleThing showed two days prior. According to Dedic Stojanovic, these brands spent “hundreds of thousands of dollars” on their events. These digitally native brands also attracted a slew of new tech sponsors to the event, including Shopify apps Omnisend, Okendo and Gorgias.

The Boohoo show featured two influencers, Ocean van Exel (@oceanvanexel, 230,00 TikTok followers) and Arnesaj Jones (@arnesahj, 14,000 followers), who won a TikTok hashtag challenge driven by the brand. It prompted users to show off their Swim Week walk, using the hashtag #boohoocasting call. The influencers then shared their runway experience with their fans across Instagram, TikTok and YouTube. That “created a spike of organic content that amplified [Boohoo’s] activation, product and message,” said Christina McGonagle, Boohoo’s U.S. marketing director. A live performance by Ty Dolla Sign was part of the show.

Dedic Stojanovic said that influencers first began replacing models on the Miami Swim runways in 2017. This year, those influencers were largely TikTokers.

Getting in front of fashion lovers in the mood to hit events didn’t necessarily mean owning a slot on Swim Week’s official event calendar. For Tkees, Swim Week served as a chance to attract foot traffic to its Miami store, which opened just prior to the start of the pandemic, in February 2020.

To do so, the brand secured its first swimwear partnership with minimalist swim brand Mikoh, launching a month-long pop-in featuring its styles on July 6. The pop-in kicked off with an evening shopping event that was hosted by Miami-based influencer Cass Dimicco (310,000 Instagram followers) and also featured her Aureum jewelry line. Tkees, Mikoh, Dimicco and Aureuum each promoted the event in their Instagram Stories, along with a link to RSVP. Tkees also hyped the event to its U.S. email list and Miami customer base. The night prior, the brand hosted an influencer dinner, where it invited guests to visit the store the following day.

The event drove “hundreds” of RSVPs and an increase of 75% in foot traffic, compared to days prior, said Carolynn Lacasse, Tkees’ director of marketing and retail. “It was rejuvenating to experience the power of in-person events and connections [again],” she said.

She added that Tkees plans to run a marketing activation around Swim Week again in 2022, saying, “We want to build on this year’s momentum.”

With the event done, Paraiso is mulling over a few changes for future events. The company is seriously considering moving Swim Week to June next year to best serve as a resort collection launchpad, Dedic Stojanovic said. Brands typically debut resort collections in May and market them in June and July.

Paraiso is also planning to extend the length of Swim Week in the future to accommodate more B2B components. According to Dedic Stojanovic, it’s seeing demand from DTC brand execs for workshop-style events on effective tools and strategies for competing with more established brands.

Otherwise, Miami Swim Week will become an entirely consumer-focused event. Shows, parties and dinners will be ticketed, and VIP packages will be available. “It doesn’t make sense for us as a platform to remain closed for the industry, when the brands haven’t been focused on buyers for three years; they care about the consumer,” she said. “We’re on the path to a different event that seems more like a fashion festival than a fashion week.”

For her part, Pereira found that the event made more sense than New York Fashion Week and its “archaic, old model of presenting things six months in advance, [resulting in] people losing interest.” In addition, it’s less stuffy. Simonett also featured influencers in its show — Jen Ceballos of @endlesslyloveclub (640,000 Instagram followers) opened it, and Jazmyne of @jazmynejoy_ (83,000 followers) closed.

“Miami doesn’t have a playbook,” she said. “And when there are no hierarchies and years of established processes, there’s this new level of creation that can happen.” She called out the success of Miami’s Art Basel, saying you don’t need “thousands of creatives” living in a city, in order for people to come together for a creative purpose.

In Simkhai’s eyes, the event has the potential to become the industry’s go-to stage for debuting resort collections. “Miami is the American hub of resort, and the whole industry loves a reason to visit — so why not?”

How fashion brands got in on UFC 264

Is there an Instagram account that documents the standout looks worn on the sidelines of professional sports events? There should be.

As Adam White, CEO of sports media brand Front Office Sports, said to me this week while discussing the fashion-focused hoopla around Saturday’s UFC 264, “These big sporting events are a new red carpet. Celebrities know that there are going to be cameras and they’re going to be seen. And from a fashion standpoint, they want to show up in ways that are going to generate buzz. There’s a reason they’re there.” The fight marked the first time fans were allowed to attend a UFC event in Las Vegas in more than a year.

Showing up to the event was Addison Rae, who was styled by Law Roach in a vintage Versace dress from the brand’s spring 2004 collection. Megan Fox, styled by Maeve Reilly, arrived in Dolce & Gabbana circa spring 2003, and Kourtney Kardashian wore a black-on-black look of a one-shoulder corset top and leather pants. Men also made a fashion moment out of the event: Fox’s date, Machine Gun Kelly, wore a Dolce & Gabbana jacket and pearl necklace, while Jared Leto wore a plunging blouse and blue neckerchief that launched what seemed like a million memes.

Of course, the fashion and sports worlds intermingling is nothing new. Fashion publications have long documented the looks worn courtside at basketball games by Beyonce, Rihanna and Kendall Jenner, among others. And athletes’ pre-game style has increasingly served as inspiration — so much so, that brands are sponsoring stadiums’ oft-photographed arrival paths and the Instagram account @LeagueFits is documenting the looks daily.

White listed countless other examples, from James Harden hitting Paris Fashion Week early this month to Louis Vuitton entering a three-year partnership with the NBA in January 2020. The two have since collaborated on a capsule collection and a trophy travel case.

Brands are becoming hip to the fact that, not only do women control most of the purchasing power in the U.S., but — along with gamers — they’re also sports fans. The NFL’s audience, for example, is upward of 40% women. “Going forward, we’re going to see an influx of truly women-driven fashion initiatives for women’s sports fans,” White said. Among his other predictions: Makeup and private label brands will soon be gunning for partnerships with athletes.

Ahead of its luxury wing opening, American Dream has lost more retail partners.

According to fine jewelry brand founder Ippolita Rostagno, TikTok is a marketing mismatch for her brand.

Why Nordstrom purchased a stake in fast-fashion retailer Asos.