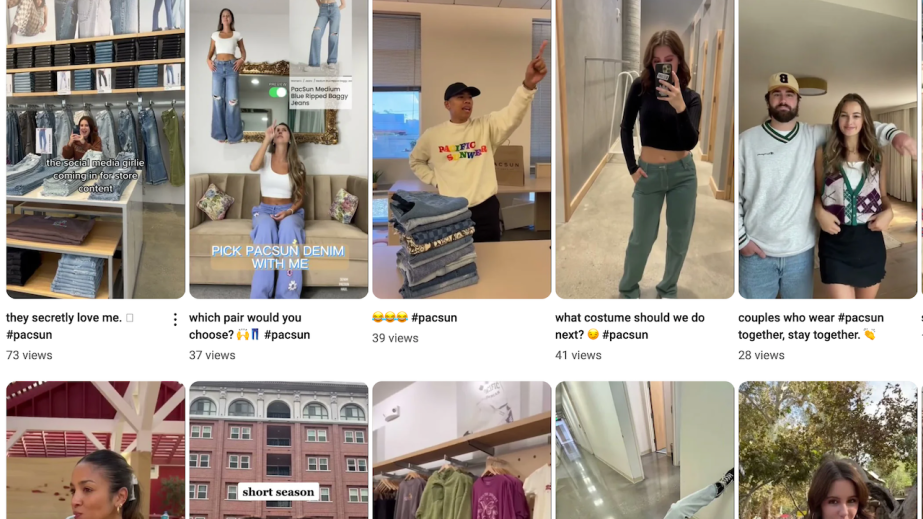 This week, an exploration of fashion brands’ bet on YouTube’s TikTok competitor. Scroll down to use Glossy+ Comments, giving the Glossy+ community the opportunity to join discussions around industry topics.

With short-form videos dominating Americans’ screen time, largely in the form of TikToks, brands across price tiers and categories have increasingly leaned into the opportunity. In response, social platforms specializing in other content formats have rolled out features accommodating the trend. YouTube’s Shorts is proving worthy of brands’ focus, even with content demands at a high.

According to social media leads and influencers, YouTube Shorts is offering the type of first-mover advantage reported by early TikTok adopters, via high engagement numbers out of the gate. It’s also fast-tracking strategic initiatives — like gaining YouTube subscribers, without long-form video investments — and boosting sales.

Paris-based content creator Frederico Stauffer, who’s regularly tapped by Louis Vuitton, Hermès and Prada for paid, video-focused partnerships, started a YouTube channel on October 20 to “experiment” with Shorts, he said. He posted favorite videos he’d previously posted on Instagram or TikTok, where he has 73,000 and 31,000 followers, respectively. “After posting the first [Shorts] video, I had 20 subscribers and 4,000 views in the first hour,” he said. That video now has 13,000 views, and his third and fourth Shorts posts have 3,900 and 5,000 views, respectively. Stauffer said he’s going to start recommending the platform to his brand clients, calling it a minimal-lift, “worth it” investment, particularly as they’re already churning out video content.

Among apparel brands that have added Shorts to their marketing mix are Nike, Skims and American Eagle. Luxury players including Gucci, Christian Dior and Louis Vuitton are also on board. YouTube Shorts videos see more than 30 billion daily views and attract 1.5 billion monthly logged-in users, according to YouTube.

Pacsun has consistently posted Shorts for the last two months and had a presence on the platform for several months before that, said Tyler MacDonald, senior manager of influencer and social media at Pacsun. He and his social-focused team of five are taking a “trial-and-error” approach to Shorts content, mixing the “best of” Pacsun’s TikTok and Reels videos with original posts spanning influencer outfit checks and inside looks at the company. A recent Shorts video with 5,000 views features its corporate employees entering the office and their times of arrival. But Pacsun’s also posted “a lot of flops” on the platform, MacDonald said. About seventy percent of posts are produced by Pacsun, while 30% are made by influencers.

For Pacsun, Shorts is proving most useful as a tool for gaining YouTube subscribers. YouTube and long-form video content will be a large focus for the company in 2023. Before Shorts, the level of engagement resulting from the labor-intensive content creation for the platform hadn’t proven worth it. Pacsun now has 26,000 YouTube subscribers. MacDonald said he’s hopeful Pacsun will have a strong grasp on the type of Shorts content that best resonates among YouTube users by the end of the year. The company is currently advertising on Shorts.

Likewise, Stauffer aims to engage his Shorts-fueled YouTube following with long-form content, in the form of photography tutorials, in the future.

Meanwhile, “Project Runway” alum Gunnar Deatherage is driving his Shorts audience of 1.8 million to his long-form content on Patreon. There, members paying $3-$14 per month can view more in-depth takes on his instructional fashion design and construction videos. They can also download design patterns and gain exclusive access to a Discord community.

“People assume the only money to be made on YouTube is from the views,” he said. “But the clicks absolutely do turn into dollars. It pays the bills.”

In addition, Deatherage has taken part in brand partnerships that feel authentic, with most enlisting him to create designs based on whatever it is they’re promoting. For Netflix, that was a dress befitting Beth Harmon in “The Queen’s Gambit.”

Primarily a short-form video creator, Deatherage first became active on social media during the pandemic, he said. He posted his first Shorts video in mid-2021. He now sees 20 million to 30 million video views per month on YouTube, owing his growing audience to the platform’s algorithm-driven Explore Hub.

Deatherage said Shorts has great potential for those with a craft, including designers. He shared a plan to stir anticipation around a collection by documenting its creation on the platform before debuting it on a fashion week runway.

Through a partnership with Shopify announced in July, YouTube allows users to integrate product selling into long-form videos, Shorts and livestreams.

“It’s really early, so it hasn’t really taken off yet,” Harley Finkelstein, president of Shopify, told Glossy of the partnership. “But one of the things that are going to be very big for 2023 is live shopping in the Western world. And it will be in a way that’s different from what happens in China.”

Bridget Dolan, managing director of YouTube shopping partnerships, said the most popular categories selling on the platform are beauty, fashion and technology.

“We’re seeing more [shoppable] activity since we’ve made short-form videos shoppable,” she said. “It’s part of a fun experience: You watch a creator, they’ve talked about a product, and you value their opinion and trust them. You can then buy the product then and there.”

She added, “It’s helpful for the viewer, but it also helps the creator and fuels them to keep going.”

Remaining a go-to stage for brands and popular creators has been increasingly challenging for social platforms amid increasing competition. For YouTube’s part, it’s testing various monetization models, including an affiliate program as well as a payment program tied to different methods of tagging products, Dolan said.

The fact that YouTube now houses a short-form video hub, more conducive to the type of off-the-cuff content people are demanding, is a big step in the right direction, based on Stauffer’s experience. He recalled a job he did for Louis Vuitton capturing social content on the set of a campaign shoot. The crew spent the day capturing styled-to-a-T videos in four different rooms, for 2-3 hours each. Stauffer, meanwhile, had 5-10 minutes to record video in each room. The brand’s resulting 10-minute video saw just over 200,000 views on TikTok, while Stauffer’s 5-second video saw 2.6 million.

“The videos shot by those of us in the corner end up having a way bigger impact,” he said. He noted his constant focus on meeting luxury brands’ “elegance” standards while also playing to platforms’ trends.

Speaking of standards, regarding the potential of a Vine return, Deatherage said he’d keep his distance. Shorts’ 60-second video limit is as short as he’d like to go. “It feels a little blasphemous to my career and to my craft to [confine what I do] to six seconds,” he said, referencing Vine videos’ original duration.

Pacsun, on the other hand, would be all in. “We’re just always on our toes, ready to see what the new thing is. And we like discovering alongside our Gen-Z audience and being where they are,” MacDonald said. “We’re on BeReal now — and we’d use Vine, for sure.”