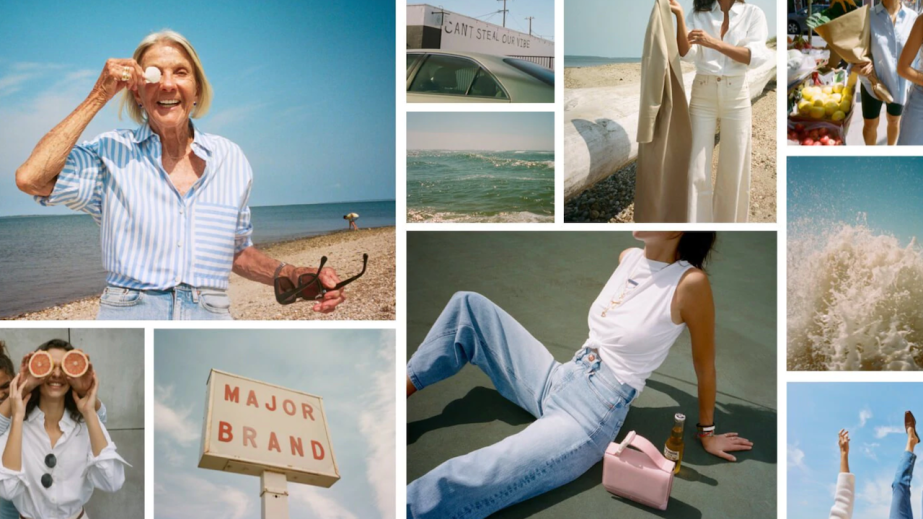 For AYR, ‘building a legacy business in a digital era’ involves catalogs

It wasn’t until mid-pandemic that 8-year-old fashion brand AYR came into its own and became profitable, according to its founders. And they largely owe that to launching a print catalog.

“The catalog changed our business,” said Maggie Winter, co-founder and CEO of AYR, who noted the marketing tool is set to drive $20 million-$25 million in revenue for the company this year. A new version is mailed out nationwide every 4-6 weeks, with 75% of copies going to prospective customers. The 28-page catalog includes a 10% off discount code, used by just a quarter of shoppers acquired through the channel.

While the company is used to seeing slow annual growth of 50% each year, it’s tripled its revenue in the last 12 months. That’s despite losing a third of its revenue in early 2020, when retailers closed their doors and canceled orders. It now sells 99% DTC, with some items selling on Shopbop and others available for rent at Nuuly.

“Catalogs are also high-touch, and they work when you’re in expansion [mode],” said Max Bonbrest, co-founder and COO of AYR. “We’ve been introducing new products, and we’re introducing new [product] categories for fall.”

The founders’ content strategy is the catalog’s secret sauce: They take inspiration from Instagram and TikTok, as well as “nostalgic” marketing content from the past, which results in a product that’s reflective of today’s culture. But representing the company’s ethos and honoring the craft of making quality apparel is also key, they said, as is prioritizing relatability.

Much of that is achieved by taking a hands-on approach to creating the catalogs. Other than modeling, it’s the one-person job of Winter, who acts as the photographer and graphic designer, among other roles. Models typically include Bonbrest and her grandmother, among others.

Print mailers have seen an uptick in brand adoption since the start of the pandemic, when lockdowns meant a captive audience. Rising digital ad prices have also pushed brands seeking more affordable alternatives to the channel. In September 2021, 72% of direct marketing agency Belardi Wong’s clients said they planned to increase the circulation of their direct mail or catalog program in 2022. In March, 76% of its clients said they plan to activate channels beyond their current marketing mix. Among the company’s DTC fashion brand clients are Lunya, Naked Cashmere and Buck Mason.

According to Winter, for AYR, the catalog’s return on investment is 2.5-3X higher than that of the Facebook ads it bought in the same timeframe. However, in comparison, catalogs require “a bigger cash outlay, [the investment] takes longer to be paid back, and there’s a bigger workload,” she said. “There’s a tradeoff, for sure. But the benefit is conversion, as well as conversation.”

AYR reintroduced catalogs in mid-2020, after first testing two styles in late 2019. One was clean and simple, while the other was infused with more personality. Winter compared the approach to the latter to creating an Instagram post: “It was, ‘Maggie shoots clothes on Max and writes a joke she thinks is funny, and doesn’t think before hitting send,’” she said. It worked to drive more sales and became the brand’s go-to format. The founders recently tacked a catalog shoot onto a trip to L.A. to visit the brand’s denim factory, using their hotel as the shoot location.

At the end of 2020, AYR reached profitability, fueled by catalog-driven sales. According to the founders, until vaccines became readily available, they could track when the catalogs hit homes, down to the hour, based on the resulting wave of traffic and sales on the site. Rather than sweats, its core styles include classic jeans, tees and button-downs that can be worn All Year Round.

Infused in each catalog are “Easter eggs” in the form of copy referencing everything from “Troop Beverly Hills” to “RuPaul’s Drag Race,” Winter said. For the imagery, she finds inspiration from old print catalogs by J.Crew, where she worked in merchandising until 2012, via the Instagram account @lostjcrew. “There’s something authentic, reassuring and simple about [J.Crew’s catalogs],” she said. She also references @simplicitycity, which posts pics with a similar ’90s aesthetic.

Other cues for the catalog are taken from TikTok, where Winter’s picked up styling tips, like how to tuck in a shirt without bulk. The styling also ties to AYR’s “swiss army knife employees,” said Winter, in that one style is often shown worn in different ways and in different settings. Even pre-pandemic, the company was small and nimble, requiring staffers to wear many hats, she said.

Though Bonbrest is often featured on the pages, she’s not called out as the founder or positioned as the face of the brand. “What translates is the relatability of the brand; it’s about a personality, not a person,” she said.

And, though the founders pride themselves on their thoughtful, sustainable approach to sourcing and manufacturing, they’ve taken a light approach to spelling out their processes in the catalog. “The clothing is what we’re proudest of, but clothing doesn’t need to be taken so seriously,” Winter said.

The success of the catalog has prompted changes to the company’s content strategy. For example, within the last year, it’s updated its e-commerce site imagery. Pristine shots of models against seamless white backdrops have been replaced by images of models in common settings, including a living room, a sidewalk and the beach.

“We’ve learned that – rather than what we thought we should be doing, coming from big companies – the ‘sticky’ stuff [that engages shoppers] comes from us being ourselves,” Winter said. For her part, Bonbrest’s resume includes PR roles at Elizabeth & James and H&M.

Prior to 2020, AYR was “a little business with a small audience and small revenue,” Winter said, adding, “We’ve graduated past that rickety startup phase.”

First incubated by DTC menswear company Bonobos, AYR became an independent brand in 2016. At the time, it raised funding and has since raised $6 million. At the same time, it’s grown its top line by 25 times, Winter said. It has 12 employees.

“We’re now independently financed, and we invest every penny of profit back into creating new products,” she said.

She added, “We’re trying to build a legacy business in a digital era. So, along with [leveraging new] opportunities, we’re focused on creating value in a crowded marketplace.”

AYR co-founder Maggie Winter on the girlboss phenomenon: “We are proudly, securely profitable… It doesn’t sound sexy, and it won’t land you on the cover of Forbes.

The landscape today for females in business is extra challenging. On the one hand, you want to connect with your audience, and our audience today is all female, and it’s something we’re proud of. And on the other hand, we take our job seriously. And our job is to operate a business; it’s not to fit into the mold of – I don’t even know if it’s behaving, but looking a certain way. And that’s especially what financing has really wanted women to end up becoming: the product, instead of the operator.

So much for Tiffany’s recent initiatives centered on targeting younger shoppers. Founder Nicole Wegman is strategizing to make Ring Concierge ‘the Tiffany’s of our generation.’

The first global NFT Day, in Paris, provided a brand guidebook to evolving NFTs from a gimmicky marketing play to a consistent revenue stream. The highlights: A long-term strategy is key, as is providing buyers exclusive access to opportunities of true value.

Layering clothes on Roblox is now a thing, and brands are already taking advantage of the opportunity.