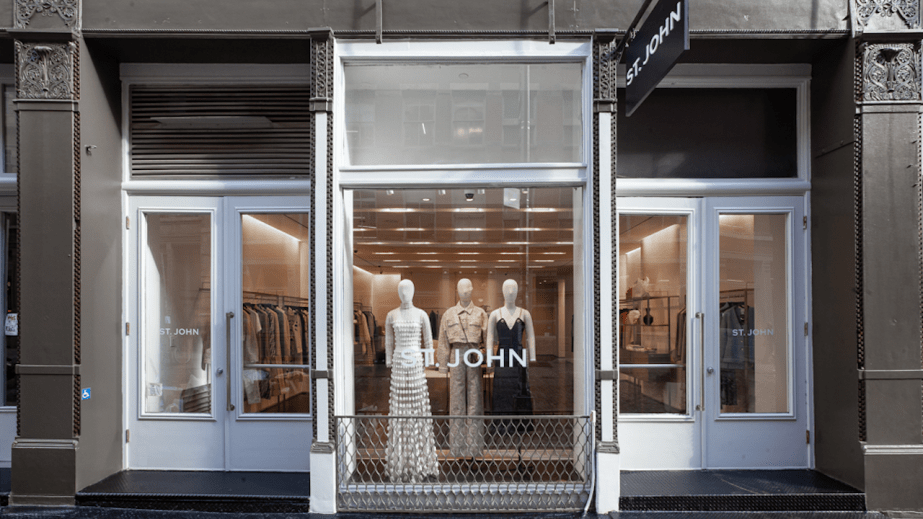 This week, a look at why St. John and fellow fashion brands galore are introducing their makeovers for the pandemic era in SoHo.

“It’s the fashion hub of the world,” said Andrew Lew, deputy CEO of St. John, regarding SoHo. “And as we’re broadening our demographic, it’s an opportunity to introduce customers to the brand.” If the store’s successful, based on sales, he plans to upgrade to a long-term lease to keep it there. St. John currently has 37 stores, including a boutique on Fifth Avenue.

As the oldest American luxury ready-to-wear brand — Ralph Lauren is 54-years-old, and Calvin Klein is 53 — St. John has seen its fair share of ups and downs. It’s a common tale in the luxury space: It’s struggled to find its bearings, with its core customers “aging out” of wearing its styles, as Lew put it. Retaining them while also pivoting to connect with younger shoppers is a hard balance to strike.

Unsatisfactory attempts have led to much executive turnover at the brand in the last 20 years. In 2018, former PetSmart and Diane von Furstenberg executive Eran Cohen was hired as CEO. He brought on creative director Zoe Turner, former designer at Max Mara and Christian Dior Couture, before announcing an all-encompassing rebrand, down to the logo, in November 2019. He left the company this past April.

During a meeting with him in late 2019, Cohen pointed to his tough position, noting the value in spotlighting St. John’s heritage while also pushing the brand forward. “New conversations in retail are happening every day, and it’s important that we’re aware of them and pay attention,” he told me.

Across execs, efforts to appeal to a new generation have included casting Angelina Jolie and Kate Winslet in campaigns, in 2005 and 2011, respectively. Meanwhile, in 1997, St. John reportedly launched a lower-priced line targeting younger customers called SJK. It was discontinued after three seasons. On the flip side, to focus on its core assortment, it folded its pandemic-perfect St. John Sport line “about five years ago,” said Lew.

St. John’s new pop-up’s assortment includes a crewneck sweatshirt, which is just one of many sweatshirt styles the brand now offers. It also sells hoodies and joggers, in various fabrications. Lew called a French terry style with a knitted logo “our version of a streetwear sweatshirt.” The new incorporation of logos is meant to ensure recognition as the brand deviates from its signature styles. It’s also a play for the Asian market, where “logos are important,” Lew said.

Moving forward, Lew plans to push the brand’s “lifestyle dressing” options, expanding further beyond the “buttoned-up” corporate wear and evening wear for which it’s known. But at the same time, he called formalwear a current “bright spot” in the business, with events starting to return. The category has consistently made up around 27% of the business, and it now accounts for 33%, he said. All things considered, you can almost be sympathetic to the brand’s flip-flopping of directions.

Also forcing instability has been the brand’s changing of hands. After being family-run by Irvine, Calif.-based Robert and Marie Gray, St. John was acquired by Escada in 1989. It then went public in 1993 and was taken private six years later. Chinese company Fosun Fashion Group, which owns Lanvin and Wolford, among other luxury brands, took a controlling stake in the company in 2013. For 2020, FFS reported revenue of around $21.2 billion, a 5% dip from the year prior.

“We’ve gone through different variations of the business, as many brands do, but not many survive to 59 years old,” Lew said. ”The brand and what the Grays built is the story of an American dream, and I want to be a great chapter of the St. John story.”

Where the brand has had an advantage in the past 18 months is in its vertically integrated production, taking place in its Irvine headquarters and in Baja, Mexico. Though its factories were forced to close during the pandemic, they pivoted to making masks at the first opportunity, helping to maintain a cash flow.

But luck was against the brand more recently when many corporations delayed their plans to go back to the office after Labor Day, Lew said.

Lew has experience heading up companies ill-suited to the times. Until earlier this year, he was president of Brooks Brothers, which filed for bankruptcy in July 2020. For St. John, he’ll be rolling out his own “very, very aggressive” growth plan for the company within the next couple of months.

“​​The state of the business is never where I want it, because we always want to do better than we’re doing,” he said. “But we’re definitely tracking in the direction we want to be going.”

Establishing more control through DTC sales is top of mind, especially through the brand’s e-commerce site. According to Lew, luxury brands that sell accessories are “doing better,” as the market’s customers don’t trust the fit of clothes bought online. Therefore accessories are one of his “chase categories.” As such, the brand is fast-tracking the production of giftable wrap scarves, as well as new $150-$300 jewelry that can serve as a brand gateway for younger consumers. The jewelry collection is made in the same owned facility that makes St. John’s garment buttons. In addition, Turner has introduced footwear and handbags to St. John’s arsenal within the last 18 months.

Moving forward, Lew also wants to open more pop-ups, as well as permanent stores. St. John will announce another pop-up within weeks, he said, declining to offer further details. He added that the brand’s newer e-commerce customers are helping it to pinpoint where its shopper base is located, and where to set up stores.

As for the SoHo pop-up, he called it a “test and learn space” from which he hopes to obtain applicable learnings for other stores. Archival pieces in limited-edition colors will be among first-time offerings on the floor. Though he declined to share lease terms, Lew said the store was a “great opportunity.”

“SoHo is very much back to normal,” he said. “It has energy. This is where you want to be as a fashion brand.”

I can attest, first-hand, that there’s no lack of foot traffic, however the same can still be said of unoccupied storefronts.

Brands are scooping up retail space in downtown Manhattan

It seems fashion brands are finally ready to take advantage of the deals available among SoHo storefronts. According to a report by the Real Estate Board of New York, in the first half of 2021, asking rent in the neighborhood was down nearly 40% year-over-year.

And pop-ups are just as popular, opened by Jil Sander (96 Greene Street) and St. John in September, among others. Footwear brand Sarah Flint will open a pop-up on 409 West Broadway on Tuesday, and Alejandra Alonso Rojas launched a temporary space in neighboring Tribeca earlier this week.

“Especially in New York, a lot of folks are using their pop-ups to [more affordably] test digitally-focused things before rolling them out in a larger capacity,” said Sarah Engel, CMO and chief people officer at digital consultancy January Digital. Trends among those tests include creating a showroom-style store. “These stores are small and hold no product, but they offer same-day delivery,” she said. In addition, brands are testing “touchless checkout, allowing customers to just pick something up and walk out the door.”

For her part, Sarah Flint, founder of her namesake brand, said she tried the showroom model with her first SoHo pop-up, in 2019. But, she found, “Customers wanted to leave with the product,” she said. So this time around, her store will be stocked with inventory.

Flint will rely on her ambassador community of 800 women to drive traffic to the store, which is located on the same street as the 2019 pop-up. That store proved “a huge driver of brand awareness and customer acquisition,” she said.

“It’s my dream to have a permanent [store] NYC, but it has been tough to make permanent plans, given everything going on in the world,” Flint said. She added that there were plenty of properties to choose from, ensuring she got a space suiting her vision.

“Our approach to retail has always been about creating an environment where customers experience the brand, but also feel free to just come, sit, and have a cup of tea and a chocolate chip cookie,” she said.

“My goal is to keep it as a permanent store,” she said, adding, “I have to admit that when the possibility of opening the store in Tribeca came up, it made me so happy. It has an ease to it and embodies the casual luxury vibe that defines [my brand].”

Her approach to the store was to create “an exciting experience that’s very personalized for customers,” she said. The focal point of the store is articles of clothing hanging like “art pieces in an exhibition.”

“Being able to present the AAR universe is so important to me,” she said. She hosted her first pop-up in Tribeca in 2018.

The big stories of the week included Tom Brady announcing a menswear line and Fendi and Versace teaming on Fendace.

Faherty’s Kerry Docherty spells out what it means to be a sustainable brand in 2021.

The latest Yeezy Gap style to be released is a $90 hoodie.