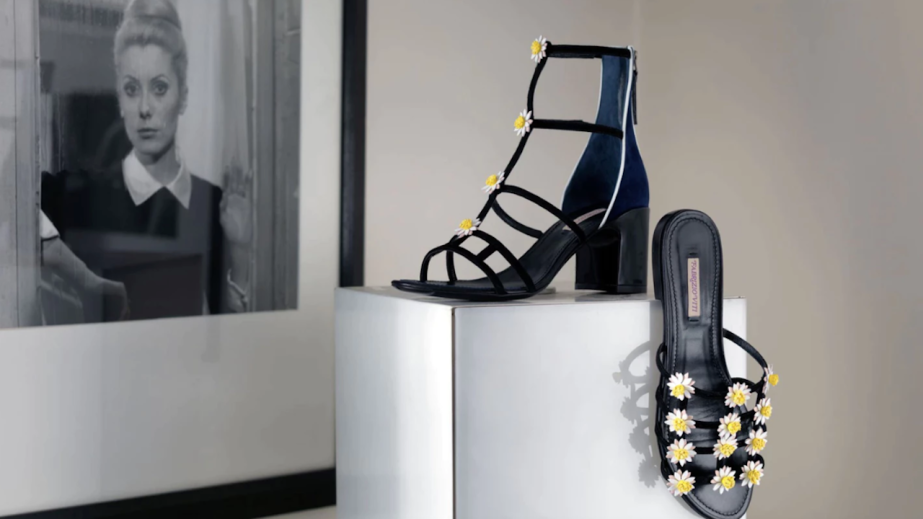 Fabrizio Viti has been the head of women’s shoes at Louis Vuitton for 15 years, but he is also one of the few creative heads at LVMH to also have his own brand outside of the company. His eponymous brand launched in 2016 and, despite being nowhere close to competing with Louis Vuitton in terms of size or scope, Viti said that designing for his own brand has been just as creatively rewarding.

Unlike Louis Vuitton, which sells through more traditional channels like luxury department stores, Viti’s own brand is sold through newer platforms like MatchesFashion and Moda Operandi. Going outside the box is essential for a smaller brand like Fabrizio Viti, which can’t compete with Louis Vuitton’s mammoth amount of resources. Louis Vuitton helped LVMH bring in a record $53.5 billion last year, which LVMH specifically attributed in part to Louis Vuitton’s dominance in the shoe market. Viti declined to say how much his own brand has earned, except to say that the two were definitively “not competitors.”

Late last month, Fabrizio Viti branched out of footwear for the first time with the launch of a handbag, a first step in diversifying his brand’s product offerings. Viti spoke with Glossy about the split of duties between Louis Vuitton and his own brand, the challenges of being in charge of everything and the merits of creative risk-taking.

How do you divide your responsibilities between your two brands? Is it a juggling act?
I just design. I come into the office or I work from home, and I already know what I want to do that day. While I’m designing, I always know which brand it’s going to be for, and it’s quite easy for me to separate them. I’m lucky the factory that produces Louis Vuitton shoes and the one that produces my own shoes are about 15 minutes apart from each other. It’s not really hard to juggle the two, because I’m well-organized. Here at Vuitton, there are other people working here with me, but the team is very small. For my own brand, it’s just me designing, entirely me. Working for my own brand is much more intense, and the problems are a lot more challenging.

When you work at a big company, you design until the first prototype is on the table, then you don’t have to worry about delivering it. My work is just the first prototype, and then I hand it off and it’s someone else’s problem to figure out how to make it, to talk to the factories, to produce it, all that. But for my own brand, I have to overview the whole thing, every step of the way.

I always know which is more urgent. I work for the closest deadline. But I enjoy designing. The amount of work is no problem; I could sit and do it all day. It’s all the other aspects that are much harder, and it’s at my own brand where I have to worry about them the most.

Are there certain aesthetic differences or distinct design philosophies for the two brands? Do you design differently for one or the other?
When you work for a big brand, you have certain codes you have to follow. Louis Vuitton has codes they’ve established over the years. For Vuitton, there are some guidelines made for us that define the identity of the collection. The piping and colors are very particular at Louis Vuitton, for example. For myself, after only three years here, we already have our own visual guidelines, as well. I call them rules, but since it’s only me designing, I can break them any time I want. But even though we have variety in the collection, I like to keep some continuity.

For my brand, the heels are always black and the sole is always black, just as an example. It was far from perfect on day one. Nobody [at Louis Vuitton] was pushing me or pressuring me with my brand. I’m very aware of what we are selling and not selling at Vuitton, so I try not to overlap. To make the [Louis Vuitton team] understand took some time, but they were absolutely supportive. Nicolas [Ghesquière, the creative director of Louis Vuitton] was the first person to support it and to tell me I should start my own brand. It’s very small, and it’s very different than Vuitton. My brand is not a competitor. I wish I was a competitor — that would be nice — but I’m not.

What is the hardest challenge of running your own brand?
The relationship with the factories that produce the shoes, easily. You can have a great Instagram or a famous girl wear your shoes or whatever, but if you can’t make the shoes how you want them, you might as well stay home. Building the relationship with the factories is hard, and making your shoe sketches come to life is really challenging. I’m lucky because I have a lot of talented people on my team, but still it’s hard to keep up because it’s not under my control. I’m there all the time, for sure, but ultimately, it’s up to the factories to produce what I want. Sometimes it comes out how I want it, and sometimes it doesn’t.

What’s your next big project coming up?
Well, we just launched a bag, which is important because it’s a new category [outside of shoes] and I obviously want it to be a success. Then, of course, I’m working on the next Vuitton collection. After all these years, I still work with a lot of passion. I talk to the young people around me, and one thing I want to tell them is to just try doing things for yourself. That’s why I started my own brand. I just wanted to see if I could.