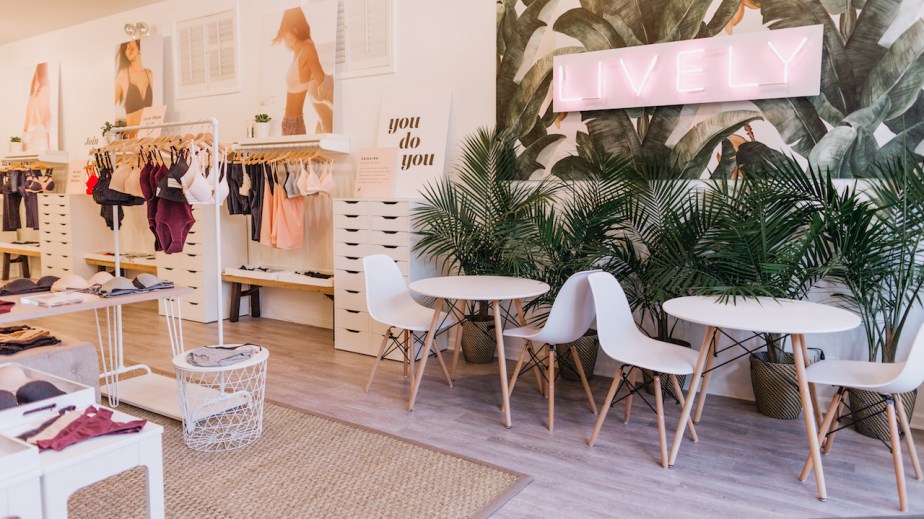 Experience per square foot: Inside retail’s shift from stock to space

Lately, mall developers can’t stop talking about their projects’ public spaces. And fashion brands opening stores seem more excited about their decor than their product selection. As the physical retail landscape evolves, there’s been an overall shift away from product. Brands are working to strike the right space-product balance, but doing so takes time many can’t afford.

This week alone, bra brand Lively opened a U.S. store in Austin, forfeiting rack space in favor of chairs, sofas and plants. Founder Michelle Cordeiro Grant said a main goal was to create a gathering place for women. Likewise, contemporary Scandi brand Ganni opened a nearly-3,000-square-foot store in London’s Soho neighborhood, meant to be a place where people would want to hang out, according to the company’s founders. Between the striking artwork and color-blocked walls, there’s a large table featuring a single pair of boots, tall cases housing just one accessory per shelf, and racks in select nooks and corners holding about a dozen pieces each.

The idea has been gaining traction. Eileen Fisher opened a store built on the concept last August, aptly naming it Making Space.

“It gives us the ability to drive foot traffic through [event] programming that connects with the local culture,” he said. “And then your customer becomes your greatest sales force, taking photos for their own social network to tell people where they are and what they’re doing. That’s powerful; you can’t replicate that any other way.”

Melissa Gonzalez, founder and CEO of retail consulting firm The Lionesque Group, echoed the notion that creating a stage for content production is at the core of building space into a retail destination. “Brands want to offer a human connection and to build a community of ambassadors, who are often the strongest channel for brand awareness and growth,” she said. “Experiences are good for driving engagement, and engagement drives sales conversion.”

Gonzalez said she’s seeing demand from brand clients when thinking through square footage of pop-ups and stores for features not focused on product, namely flex event spaces, food and beverage stations, and offerings centered on services.

“It’s definitely experience per square foot that people are pushing for,” she said. “They’ll say sales per square foot matters, but when we look at the design and what we end up building, experiential is being weaved in way more.”

Brands are tracking that metric through technology, including using overhead sensors to track where people are spending time in their store and looking at what visitors are posting on social media. They’re also hearing it first-hand from store associates, Gonzalez said, who was sure to note the importance of also tracking a store’s ROI.

Retail is sending brands a mixed message. On Tuesday, TJX Companies reported slowed growth year-over-year for the second quarter of 2019, but growth nonetheless — with revenue increasing 5% to $9.8 billion in the quarter. The company’s retailers, including T.J. Maxx and Marshall’s, sit in the off-price space, which has managed to dodge the wrath of retail’s changes in recent years. The stores aren’t sparse but, rather, heavy in inventory, catering to bargain hunters who like the thrill of the hunt.

Even B8ta, the retail-as-a-service platform with stores designed to be streamlined and free of on-site inventory, sees better results when it offers a bigger selection, said co-founder and president Phillip Raub.

“In the stores that have more variety and product, we’re able to generate more traffic over time,” he said. “We take that to heart and aim to have a good, strong cadence of product. And for brands wanting to tell a bigger brand story [with product], we let them take over a larger footprint of the store and host pop-ins.”

Of course, stores taking advantage of drop shipping and offering endless aisles in-store offsets the need to dedicate a lot of square footage to inventory. You can now have as much “product on the floor,” so to speak, without giving up space for it.

Brands that have the luxury to do so are taking the time to figure out the right balance.

“Digital brands, having raised money with VCs, are coming to us knowing they want to open stores — it’s no longer a question. But they also want to test before they commit to [something] longer-term. The average pop-up used to last a month, but you’re not going to get a lot of data or insights in a month. Now they’re investing in 6- to 12-month pop-ups, on average, in order to see: How do we make sure these perform the way we need them to?”