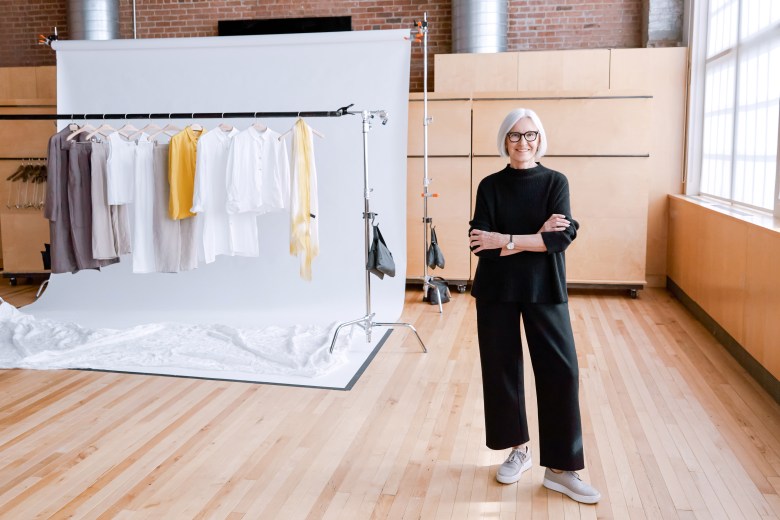 Eileen Fisher is behind a new report and corresponding platform aimed at bringing industry leaders, recyclers and the government together to address the lag on implementing circularity.

Launched on Wednesday, the report and platform, dubbed Hey Fashion!, were developed in partnership with consultancy Pentatonic. Each centers on an eight-step action plan for brands. The hope is that the content will engage customers and the fashion industry, and enact wide-scale efforts toward circularity. The report can be accessed via HeyFashion.org.

The eight parts of the action plan include establishing and scaling sorting systems for fashion recycling, investing in wide-scale recycling partners, and making and buying less. The action plan also includes tips for designing products to last and be recyclable, defining and standardizing commonly used terminology in circularity, leaving fossil fuels in the ground, and prioritizing people and the planet before profit. Pentatonic interviewed over 50 stakeholders from across the fashion ecosystem between August 2021 and January 2022 to determine what steps need to be taken.

“We’ve been specifically working on waste, as we’ve been taking our clothes back since 2009. We understand those problems, like the sorting and the specifics around that [process] and the reuse [of clothing],” said Eileen Fisher, founder and designer of her namesake brand. “We felt like there was information to share, but also, we wanted to research and find out what our [Eileen Fisher Foundation] can do to move the dial on this whole issue sooner rather than later.”

Since its founding in 1984, the Eileen Fisher brand has been at the forefront of circularity. With its take-back program called Renew, the company has pledged that as few products as possible will go to waste, leading the way for other circularity programs like those from Lululemon and Patagonia. Eileen Fisher takes back worn or damaged products for a $5 reward per item. It resells the clothes it can and makes new clothes out of materials out of the remainder using techniques like dyeing and re-felting.

Fisher added there is a need for brands to take action to be more sustainable now, instead of focusing on how it will make a brand look. As the climate goals are not within reach right now, any action, over inaction, can contribute to a more sustainable industry. Cross-brand collaboration could also help level-out associated costs and resources, as many brands use the same factories and suppliers. However, smaller brands are unaware of many of these crossovers, which is where the report and platform come in.

Eileen Fisher has worked with Pentatonic on a number of different initiatives over the years and wanted to bring forward a white paper to highlight the need to engage recyclers on the same level as brands and governments. “We realized that we’re only one company and the issue is massive. It’s really going to require a lot of people working together, a lot of behavior change, a lot of transformation and systems change,” said Fisher. “We know we can’t do it alone.”

The report also provides useful calls-to-action on legislation and ways brands and governments should support recyclers. One of the points highlighted within the report was the need for private investment across the whole industry. That includes recycling programs funded at a state and federal level, as well as brand partnerships enabling the scaling of pilot programs and development of infrastructure for wide-scale, fiber-to-fiber recycling.

“​​The biggest surprise to me was just the gap in the funding and realizing that we have so many textile recyclers doing incredible work,” said Madison Wright, circular economy consultant at Pentatonic. “How can we lift up their work and make sure they’re being recognized for their efforts?” she said.

The problem of wide-scale waste across fashion has not been addressed in an impactful way. Countries in the global south have gone so far as to reject clothing donations, as the sheer quantity and bad quality means that the items are not able to be reused.

“Waste is a massive problem, but there’s also a huge opportunity here to use the valuable waste and then create a whole circular economy for the industry,” said Fisher. The majority of clothing waste comes from cheaper clothing items made out of a mixture of fibers including polyester that don’t have longevity. “R​ight now, we only recycle 14% of our polyester, and we need to get that to 90% by 2030,” she said.

“What we want to create with this platform is to pull out the key highlights that people might not know,” said Wright. “And we want to spark those conversations and discussions that will launch into this greater discussions that we need to be having.” The platform will be a place for brands to interact with one another.