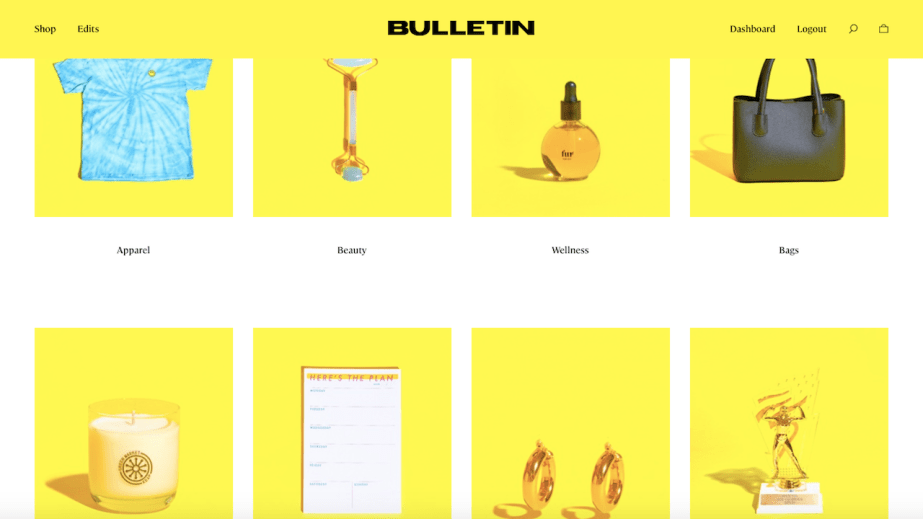 Digitally native brands want to open stores, and companies are helping them figure out how

Companies helping digitally native brands enter physical retail are growing, many through partnerships with traditional retailers. Their partner brands are opting to go along for the ride, forfeiting control in favor of scale.

This week, 3-year-old NYC retail chain Bulletin, transitioned out of beta mode its new software platform aimed at bringing the female-led brands it sells — and would like to sell (it sells 150 in stores, but has a 3,000-brand waitlist) — to other retailers. In short, it’s working like a broker to do wholesale management.

“It’s the evolution of solving the problem of brands wanting easier access to brick-and-mortar retail space when they hit a wall [online],” said Ali Kriegsman, Bulletin’s co-founder and chief operating officer. “We want to help small brands launching on Shopify, Squarespace, Etsy and Instagram expand their physical footprint, without doing trade shows or joining showrooms. They’re expensive and require long time commitments, and there’s no guarantee of getting placed in stores.”

Bulletin has been busy on-boarding brands and retailers for the platform, vetting them based on data collected since the company’s launch. Brands with a large, highly engaged (measured by comments and likes) social following have worked to draw shoppers to stores, opening them up for discovery of other brands, said Bulletin co-founder and CEO Alana Branson. She listed Dame, Valfre and Unbound as brands that have successfully drove traffic to Bulletin. In addition to followers, she and Kriegsman monitor product quality by requesting samples.

As for retailers, Bulletin is open to working with everyone from independent boutiques to pop-up companies to online retailers, said Kriegsman. Early retailers on board include a fitness studio in Hoboken, multiple hotel shops, Canadian gift retailer Drake General Store, which has five locations, and reseller Crossroads, with 37 stores.

Bulletin currently handles all correspondence between the brands and retailers, but facilitating communication between the two is coming, said Kriegsman.

Along with allowing retailers to “shop” the brands, Bulletin is offering an assortment-as-a-service option, where Bulletin staffers provide a curation of fitting products from available inventory. Alternatively, retailers can shop based on pre-packaged assortments based on values, like “Made in the U.S.A.”

“A physical, human element does slow down how fast you can scale,” said Branson. “We want to put money in the pockets of thousands and thousands of brands, and you can’t do that when you’re just limited to physical space.”

Bulletin takes 5% of every sale, and the brand gets 95%, guaranteed within 15 days of the sale.

Lea Ridenour, founder of apparel and stationery brand Made Au Gold, which has sold through Bulletin since 2016, said her main concern about the new platform is “playing the wholesale game” of getting lost in the shuffle as more brands sign onto the marketplace and not being able to count on repeat orders from retailers.

Whitney Bell, founder of clothing line Kidd Bell, said the launch came at the perfect time for her brand, as it has just ramped up its production. Kidd Bell has been working with Bulletin for a year and a half.

“We’re a six-person team,” she said. “It’s great to be able to outsource all the legwork of wholesale to someone you trust who’s securing pretty large orders.”

B8ta was an early player in the retail-as-a-service space, launching with a store focused on consumer electronics products in Palo Alto in 2015. The store offered consumers a chance to test the products, and gave the retailer a physical presence that could be launched fast and free of hidden costs, said B8ta co-founder and president Phillip Raub. Rather than the six to 12 months needed to enter a department store, for example, B8ta’s launched a brand’s in-store presence in hours.

B8ta now has 17 stores in the U.S. and will have 30 by the end of the year. Featured brands now span the gamut, and include apparel, femtech, health and beauty products. Thinx was a recent partner.

“The stores with more product generate more traffic,” said Raub. “For us, it’s about creating more variety and constantly providing something new.”

In June 2018, B8ta entered a partnership with Macy’s, through which it now powers the backend of shop-in-shop Market @ Macy’s. It uses the software found in its own stores to on-board products quickly, gather and report data, and establish a physical marketplace. Raub said the company is in the process of rolling out license agreements with other large retailers, as well as property owners, to help them create similar marketplaces. Last month, it entered a joint venture with Tru Kids Brands, which owns Toys R Us. Together, they’ll open two Toys R Us stores this year and 10 more next year, all featuring B8ta’s systems and services.

“Our goal is to really continue to service a need for brands in a thoughtful and unique way, and work with them to ensure their long-term success, either through our own stores or our platform in other stores,” said Raub. “This is the direction retail is headed.”

Neighborhood Goods opened its first store, positioned as a DTC department store, in November in Plano, Texas. The original plan, said co-founder and CEO Matt Alexander, was to feature 10 to 15 brands in discrete spaces. Currently, the store houses 40 brands displayed in category-focused sections — for example, there’s a “DTC pharmacy” featuring progressive health, wellness and beauty brands. Fifteen more brands are set to hit the floor within the next 60 days.

“It’s an extremely traditional idea,” said Alexander, noting Neighborhood Goods’ similarities to the department store model. “As a whole, the industry is trading in a currency of relevance more than anything else. Delivering something thoughtful and opinionated, and ever-changing resonates with people.”

Brands Neighborhood Goods has hosted include Stadium Goods, Dollar Shave Club, Rothy’s and Draper James. It’s currently scouting CBD brands for its assortment. Leases are up to one year in length, though the store has hosted activations lasting as short as a weekend. The average time a customer spends in-store is 37 minutes.

Neighborhood Goods is currently gearing up for rapid expansion, said Alexander, starting with a new, more “boutique” store in NYC’s Chelsea neighborhood. It’s 4,500 square feet, while the Plano space is 14,000 square feet. And competitors are taking notice of its success.

“A huge amount of incumbent retailers are calling us all the time, asking to partner,” said Alexander. “It’s a good indication of where things are going.”

Alice Ratcliffe, head of brand at Appear Here, a marketplace for store spaces, warned against brands releasing control to multi-brand retailers. Appear Here is currently leasing spaces to 75% of the 30 top-selling direct-to-consumer brands, she said.

“We’re seeing this huge rise in DTC brands wanting to enter physical retail, but they’re going about it the wrong way,” she said. “Retail is so emotional; there’s got to be authenticity — and it’s really hard for a third party to create that for your brand.”

She also warned against the platforms forcing too much technology into stores. “You lose the emotional connection that way, and retail loses its soul.”