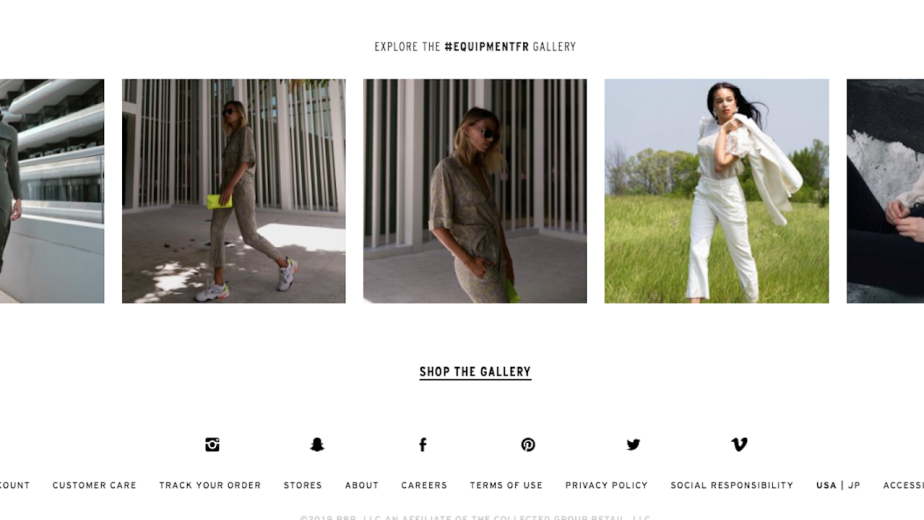 This story is a Glossy+ member exclusive.

Brands confining “likable” content to Instagram are leaving money on the table — even as shopping on the platform picks up and in-app checkout gets set to roll out to more companies. Increasingly, brands are finding new ways to use and reuse the content, and they’re seeing strong results.

At the start of this year, Bespoke Post, the monthly men’s subscription company offering themed boxes of “cool” items — grooming products, fashion accessories, barware — started featuring on other channels, including its e-commerce site, the influencer content it had been restricting to Instagram. For example, at the foot of a landing page describing its “Downpour”-themed box, six images plucked from Instagram are featured, showing subscribers and influencers wearing the included Portland Rain Jacket. A “Downpour in the Wild” header introduces the section, followed by a reminder for shoppers to tag their images featuring Bespoke Post goods with #boxofawesome.

The added feature has worked to increase purchase rates for the two boxes featuring this content on their pages. Visitors to those pages purchase the boxes 11% and 18% more often than those who visit the pages without the Instagram-fed section, said Alvaro De La Rocha, Bespoke Post’s vp of marketing.

Bespoke Post has also started featuring this influencer and user-generated content in its paid ads across social channels, including Facebook, Snapchat and Pinterest. Influencer- and user-generated content is featured in more than 50% of its paid ads, up from 0% last year, and that number will increase moving forward, based in its success to date. The savings versus producing content in-house allowed the brand to spend 15% more on advertising in June.

Bespoke Post works exclusively with micro-influencers on a non-paid, gifting basis. Featuring their content across channels has not necessitated added spend or updated contracts, as the company has always required full usage rights of its influencers’ images.

The Collected Group, parent company of fashion brands Equipment, Joie and Current/Elliott, has incorporated onto its websites a “fanreel” Instagram feed, featuring brand-curated posts by influencers and user-generated content.

“Fanreel brings Instagram into our world and brings more visibility to how real users — not just studio models — are wearing and styling our clothes,” said Simone Delfino, The Collected Group’s senior director of global brand communications.

The fanreel sees a high click-through rate, said Delfino, though she declined to share specifics and resulting sales. The company has started featuring some of that same influencer and user-generated content in its emails, with the permission of micro-influencer partners. Its marketing budget currently goes to social ads and search, and influencers are unpaid.

Moving forward, Delfino said she hopes to mirror across its brands the content strategy Joie has implemented around its regular Sunday Girl feature, which has a dedicated page on joie.com. An influential woman is profiled on the site via a Q&A, plus she’s featured in social posts and emails. She posts about the feature in her own channels, and she often hosts a Joie Instagram takeover.

Delfino also hopes to find more ways to give legs to any photo shoots it produces in-house, including with behind-the-scenes videos, in-store events hosted by the featured models, and editorial-style stories on each of the brands’ websites.

“We’ve realized how important it is to take a 360-degree approach to marketing,” she said. “And if influencers are creating beautiful content, we’ll happily take that and run with it. Why not?”

Today, all brands are in the business of creating content. The disconnect is that they’re putting a bulk of that content on social media, which only draws a small percentage of traffic to brands’ sites, said Apu Gupta, CEO of social commerce platform Curalate.

He said brands should instead be focused on getting that content on their websites and on Google when its Shoppable Image ad feature rolls out, which he predicts will be a game-changer for retail. In the future, to sell product, brands and retailers will be able to “tag it once and set it free,” he said, meaning the images will be made easily shoppable on Google and Instagram, among other social channels.

According to Curalate research, released on Wednesday, 80% of consumers say they have discovered something on Instagram that they never knew existed, and 76% reportedly enjoy discovering products on their shopping journey.

“They’re not discovering on Amazon, where there are millions of products. If you’re looking to be inspired, you’re just going to be frustrated,” said Gupta. “Helping shoppers discover what they didn’t know existed is how you win.”

According to Curalate, when brands bring Instagram or lifestyle content to their website, consumers spend 250 percent longer on the site. And consumers who view the content convert at a 140 percent higher rate than shoppers who don’t.