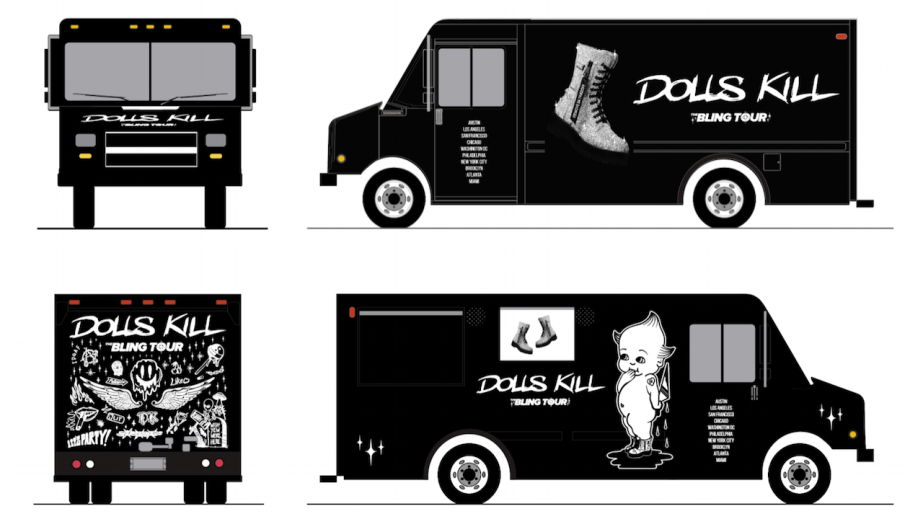 As the novelty of pop-ups wanes, brands are taking a more creative approach

For many digitally-native DTC brands, the path toward a physical brick-and-mortar presence is clear: Open a pop-up shop, gauge interest and then open a permanent store. But Dolls Kill, a fashion brand founded in 2011 with ties to the electronic dance music subculture, is taking a somewhat alternative approach.

Beginning last week, the brand has been touring a refitted ice cream truck around the country as a traveling pop-up shop. Rather than establishing a presence in a single city or market, Dolls Kill, which recently secured $10.7 million in funding, is hoping to test the retail waters in eight different cities around the East Coast.

The pop-up was built around a single product: a combat boot the brand debuted late last year called the Billionaire Bling Boot, which sold out less than an hour after it dropped. Dolls Kill wanted to bring the boot on tour for people who missed it the first time around, taking a poll of what cities their customers most wanted the boot to come to. Thus was born the alliteratively titled Billionaire Bling Boot Bus Tour.

The tour kicked off in Austin at SXSW last week and will wrap in Miami at the end of March. Perenic said the brand has already dealt with some unexpected obstacles.

“In Chicago, we had people lining up down the block until 2 a.m.,” said Tamara Perenic, experiential marketing manager at Dolls Kill. “The biggest challenge so far, compared to a traditional brick-and-mortar store, is not being able to stock as many units as we would like.”

Perenic said the brand is relying heavily on social media, primarily Instagram where it has 2.5 million followers, to promote the tour. The brand is also encouraging customers who visit the truck to share their experiences online. For Dolls Kill, the novelty of the truck is one of the major selling points. The brand has had some experience with brick-and-mortar, including a regular store in San Francisco and a concept store in Los Angeles. Perenic felt a truck would be a novel way to bring the boot to as many different markets as possible.

“Typically, the fashion truck retail format is a great fit for boutique brands that can’t afford a storefront, but want to test a new concept with minimal start-up costs,” said David Naumann, vp of marketing at Boston Retail Partners.

Other brands that have experimented with pop-up trucks include Madewell, which toured a truck around Hollywood last year, and Alexander Wang which debuted a nine-piece collection through a New York-based truck in 2016. Amazon has its Treasure Truck, a roving truck with discounted items where customers can receive regular texts telling them what is on the truck and where to find it in their city. These mobile activations bring with them an element of surprise that can be a good hook for getting customers excited.

“The ephemeral nature of pop-ups mirrors Stories and Snaps content that also disappears after a short time,” said Anthony Cospito, head of strategy at digital agency Moving Image & Content. “For example, pop-ups can inspire Stories content with special offers that only last as long as the pop-up itself.”

For many DTC brands, a pop-up is an essential way to have an in-person interaction with customers but they can be difficult to set up. While cheaper than opening a permanent store, a temporary pop-up can still be prohibitively expensive, reportedly costing around $50,000 to open and operate. Perenic said the truck was not a cheaper alternative to a stationary pop-up shop. If anything, it was even more expensive.

“When it comes to a brick-and-mortar store, you kind of know what your budget is going to be and you can plan a little better for it,” she said. “But this is our first on-road experience, so we have evolved the concept a lot and it was changing right up until the last day before we launched. It’s been tricky.”

As pop-ups continuously become the norm — and DTC brands rely less on wholesale partners to reach wider audiences — brands need to constantly come up with new and novel ways to attract the attention of consumers who are never at a loss for new things to occupy them. That could mean hitting the road in a truck or setting up some sort of experiential activation in-store.

“In today’s evolving retail environment, brands are continuously challenged to come up with innovative ways to sell products that spark the interest of both new and past customers,” said Krista Corrigan, analyst at Edited. “Pop-up trucks, a concept which started as a fad in the food industry, has now found its way into fashion where the retail model has its own share of benefits. With a pop-up truck, brands have the flexibility to move locations and extend their reach beyond a stationary storefront. The idea that the location is temporary creates the illusion of exclusivity, not unlike the buzz we’re seeing around limited-edition releases.”