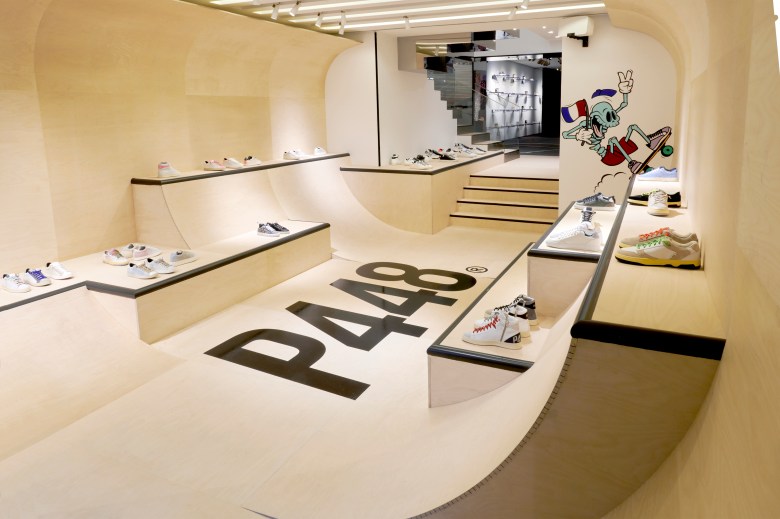 ‘A halo effect’: Why P448 is opening stores in ultra-luxury locations

Eight-year-old Italian sneaker brand P448 has been snapping up retail locations to elevate its brand positioning in some of the most exclusive shopping districts across the globe.

The brand’s opened a store on Rue du Faubourg Saint-Honoré in Paris, right next to Hermès, and a second pop-up in Le Bon Marché in Paris. Plus on Fifth Avenue in New York, the brand has signed a two-year lease for a store. In the U.S., P448 also has a boutique on Espanola Way in Miami, and it’s getting set to open a location on Melrose Avenue in L.A. In addition, it’s planning to open four stores in key cities in China in 2023.

P448’s stores range from month-long pop-ups to stores with 10-year leases, and the aim is to bring in new consumers. The stores are highly experiential: Local artisans and entertainers are present, alongside alcohol tastings, art and music. And because P448 is dissimilar in price and positioning from neighboring brands, the stores stand out.

“We picked these streets because, while we’re a global brand, we are still growing,” said P448 CEO Wayne Kulkin. “What’s even more disruptive than taking advantage of the environment and getting some of these uber-luxury locations is that we’re actually building better, more interesting stores in a very cost-effective way.” Kulkin said that travelers to key cities are the brand’s target customers. “For those who can still afford to travel, there are certain cities that are critical. Paris happens to be one of them, along with New York, Miami, Madrid and Berlin,” he said.

“Moving next door to Hermès signals to [other] brands and to customers: ‘We’re here, and we’re attempting to be one of these long-term brands,’” said Lemieux.

Global retail expert Steve Dennis agreed. “Surrounding yourself with the sort of imagery that you aspire to and borrow from is a brand positioning halo effect,” he said. “It’s also a way to interrupt [consumers] that are good prospects and on their way to [go somewhere] else, and get yourself in front of them and engage.”

In Europe, typical rental contracts are for 10-20 years. Pre-pandemic, landlords with properties worth $98 million, or €100 million, would have rather waited for longer-term contracts that also come with large deposits, called key money in France.

“We’re going to these landlords and saying, ‘We know what you need to do, but an empty building doesn’t look so good.’ And we offer a shorter-term lease,” said Kulkin, of himself and business partner Jeffrey B. Hecktman. “If we create art, music and entertainment, while mixing in other things like alcohol tastings, it’ll make a property more advantageous.”

According to Kulkin, having a store is about getting as many new eyes on your brand as possible — and that takes more than clothes on a rack. “I’d rather be in a store watching some amazing dance battle and having a shot of tequila than sitting on my iPhone,” he said.

The themes, artists and experiences featured in P448 stores are specific to their individual locations and vary over time, meaning a customer can go into the same store twice and have two different experiences. “The strategy is to have commonality, but constant evolution,” said Kulkin.

And, in part, the stores are a solution for the growing customer acquisition costs online. “If it’s from a brand awareness benefit, do I open a store in London or do I just spend more money on performance marketing online? When you start looking at it that way, in two months, we can build two stores and get more recognition, more email captures and good experiences,” he said.

According to Dennis, stores can have an elevated level of exposure and engagement with the consumer, compared to digital. And, he added, a brand’s best customers still come from early on in the brand’s growth, he said.