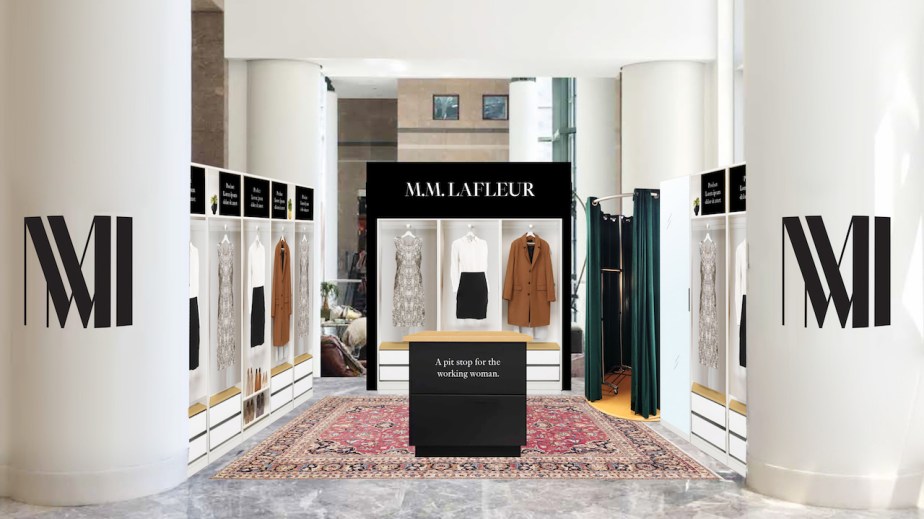 As DTC and digitally native brands continue to see the value in a brick-and-mortar presence, a new trend is emerging in the form of stores that are focused more on services and less on products.

On Thursday, DTC women’s workwear brand M.M.LaFleur opened its first concept shop, called M.M. To Go. Unlike its seven showrooms across the country, which are usually located on the third or fourth floor of a building and built for customers who are already familiar with the brand, this new concept shop serves a different purpose. Highly visible, in the Brookfield Place shopping center in New York City, it’s meant for quick, efficient services, like giving out complementary Tide To-Go pens for quick fixes and allowing customers to make returns. It’s expected the store will also bring in people who have not previously interacted with the brand. New York is M.M.LaFleur’s No. 1 market, based on sales.

“This is supposed to be a first touchpoint for people who have never seen the brand before,” said Caroline Brown, associate director of experiential design at M.M.LaFleur. She said she studied how other brands were doing pop-ups and concept shops to figure out what to do and what not to do. “This is a pit-stop concept: in and out, no appointment, no slowdown. You go in to get something quick or get help with something, and then hopefully, down the line, you come back to the brand for the full showroom experience.”

In contrast, the brand’s showrooms typically see people coming in for an hourlong styling appointment. Brown compares the new concept shop to an eyedropper, letting customers get a small taste of the brand first before offering them a path to a fuller experience at the showrooms. Each visitor receives a business card with more information on the brand’s showrooms. Tenants at Brookfield Place also get a 10% discount at M.M. To Go.

“The plan for now is to continue testing the M.M. To Go experiences,” said Brown. “It’s more for awareness and acquisition, introducing people to the brand [rather than just driving revenue]. The showroom is much more immersive. This is lighter and quicker.”

This segmentation of stores based on the needs they are trying to fill is becoming increasingly common. M.M.LaFleur, which did an estimated $70 million in revenue in 2017, seems to be taking cues from industry giant Nordstrom. The department store is opening a big New York flagship in October but will also be opening two smaller Nordstrom Local stores, one of which also opened Thursday, that are meant for quick services like alterations and returns.

“Engagement with experiences add value,” said Kathy Fisher, vp of customer experience at Nordstrom. “We know that incremental spend is two-times when people buy online and pickup in-store. For those that engage with alterations, it’s three-times more. Especially in retail, it’s about products, but services are increasingly becoming important.”

ModCloth, another digitally native retailer that has only recently begun experimenting with brick-and-mortar, has made similar services a centerpiece of its retail strategy. Customers using their styling services convert at 90%, while those that don’t are closer to 25%.

“The goal [with services] is to continue growing brand awareness,” said Monica Scholes, director of retail at ModCloth. “We want to keep people coming back and drive people to the site. If they don’t transact in the store, that’s OK. We want them to leave having had a good experience so they might be a long-term customer.”

For M.M.LaFleur, the new store is a chance to experiment with segmenting the different roles that brick-and-mortar retail can play.

“We really just wanted to place ourselves right in front of our customer, right where she is,” Brown said. “For a lot of customers, this will serve as a first big touchpoint for acquisition.”