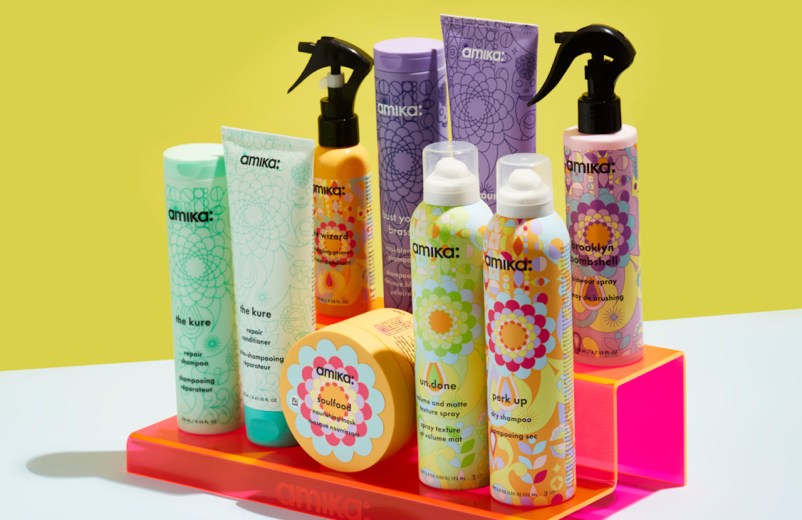 Hair-care brand Amika is the latest to pull on the pop-up lever.

On Friday, the 12-year-old company opened its first pop-up in the SoHo neighborhood of New York City, marking its first standalone foray into physical retail. The store will also host the brand’s first consumer-facing event. (The brand hosts various artistry events around braiding or updos for its community of stylists at salons.) Amika, which sells a line of shampoos, conditioners, styling products and tools, is largely found in professional salons. Its hair care is sold in 150 Sephora stores, and its tools are sold in 410. Amika would not disclose its 2018 yearly revenue, but Laura Eschricht, vp of marketing, said hair care accounts for approximately 70% of sales, and hair tools are about 30%.

“We wanted to give our customer a full, immersive brand experience in real life,” said Vita Raykhman, Amika creative director. “When we are in a salon or Sephora, the brand is wrapped in whatever the personality or environment of that space is and is dependent on their teams and their point of view.”

“Retail and salons are a bit like playing telephone. We want to talk to and engage with our customer directly,” said Eschricht.

Though the pop-up is a popular marketing tool for beauty companies, from brands like YSL Beauty with its recent experiment at Coachella to Nars Cosmetics’ mascara activation in New York in September 2018, it is predominantly associated with cosmetics brands, given the ease of quickly testing and trying on product for customers.

Knowing this, Amika made sure its iteration was focused on experiences. No traditional shampoo washes, conditioning treatments or haircuts will happen on site. Instead, Amika will play ASMR recordings that were produced in-house via headphones to promote the sounds and sensations of its products and will feature four “confessional” booths where customers can talk about their hair to stylists behind closed curtains before receiving an official consultation. In addition, it will have a community styling table and an interactive wall to test and try its Bushwick Beach no-salt wave spray, which launched on May 1. The brand has launched 10 products in 2019 and will launch two more, both focused on volume concerns, in September.

“The standard experience in beauty salons or stores is that you are in front of a mirror alone or with a stylist, but that doesn’t have a communal or social element,” said Raykhman. “We want people to really interact with our product and each other at the pop-up in non-traditional ways. We want to spark conversations. We think people will actually ask each other questions and do each other’s hair.”

All of Amika’s 50-plus products will be displayed and will also be available for purchase. Still, Eschricht said this is not an attempt to drive sales, as was the case with Wander Beauty’s recent pop-up opening in April. Rather, it is considered a brand marketing and awareness exercise, she said.

Amika did not disclose the investment in the space, only sharing that it worked with Storefront, which acts as a middleman between real estate owners and brands, to secure the pop-up lease. “Amika came to Storefront looking to create an immersive exhibit and retail space. We discussed Amika’s goal to sell their product line and create a memorable experience for their consumers. With that in mind, we took a look at several high-foot-traffic areas in lower Manhattan,” said David Gardner, account manager at Storefront. According to Storefront, on average, the cost to find, book and lease such places for about a month’s time is around $5,000.

To promote the pop-up, Amika’s “A-team” of five long-term ambassadors with contracts, like Krystal Sutherland (@krystalclearmakeup, 1.6 million Instagram followers) and Karen Yeong (@iamkareno, 602,000 Instagram followers) will be periodically posting about the experience on their respective feeds. Amika, for its part, has 222,000 followers. Additionally, makeup artist and influencer Katie Jane Hughes, with 275,000 followers, will be hosting a masterclass at the space on May 15. She will also be doing this event in an paid capacity.

According to marketing technology company Tribe Dynamics, Amika’s larger influencer strategy has been resonating. In the first quarter of 2019, Amika saw a 36% increase in earned media value (EMV) to over $5.8 million. Upping its influencer community number by 28% to 582 ambassadors this last quarter resulted in over 2,000 posts and about $10,000 EMV per influencer.

Amika will test out this New York pop-up experiment to decide if it should bring its store to other key metro cities where it has a large presence, like Los Angeles, Chicago and Dallas. Success won’t be directly tied to sales from the pop-up, but by overall growth of engagement and the halo effect on social, said Eschricht. “People really rely on stylists for recommendations, and maybe that’s once every few months,”  said Raykhman. “We definitely think there is a place to be innovative in hair care and beauty, and remind to people that you can change your look with a shampoo or a conditioner or a dry shampoo in the same way you would a lipstick.”