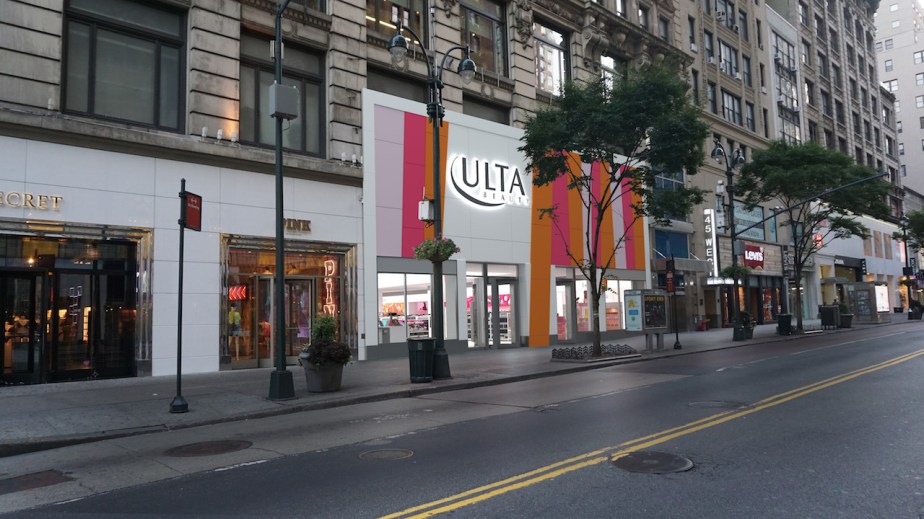 Despite the pandemic pushing into 2021, Ulta Beauty and Sephora are making bigger splashes in physical retail.

On Friday, Ulta opened its second New York City flagship, in Herald Square, with a grand opening planned for March 5. The 12,000-square-foot store, which features an elevated salon and event space, also incorporates safety and security measures for the times. For example, it has video screens in windows and a shoppable digital wall for branding and marketing purposes, no beauty testers, a dedicated buy-online, pick-up in-store [BOPIS] section of the store and back-of-store registers to curb traffic and congestion.

“We originally looked at opening the store in 2019. This location was a prime location, a New York City shopping center mecca. Because of the Covid situation we had to hold our plans, but we didn’t stop thinking through innovating and looking at how we could really make this shopping experience fantastic and right for now,” said Kecia Steelman, chief operations officer at Ulta Beauty.

Meanwhile, Sephora announced on Thursday its plan to open 60-plus freestanding stores in the U.S. this year, alongside 200 shop-in-shops in Kohl’s. Dallas, Houston, Austin, Los Angeles and Nashville will see new standalone outposts; locations will begin opening as early as this month. Additionally, Sephora’s Buy Online, Pick Up In Store service will be available in all freestanding locations as of April.

Both Ulta and Sephora temporarily closed stores due to the health crisis in March 2020, before undergoing a phased reopening in May. Simultaneously, Ulta slowed its expansion target from a planned 75 new stores in 2020 to 30-40. In August, Ulta reported that its new store rollout was impacted in the quarter. In the first six months of fiscal 2020, it opened 11 new stores and had one relocation. Comparatively, in the first half of 2019, it had 42 new stores, nine remodels, and four relocations.Sephora had planned to accelerate its freestanding strategy in 2020, hoping to open 100 stores in second-tier markets pre-pandemic. But Covid-19 slowed those plans, a Sephora spokesperson said.

Like Sephora, Ulta closed out the year with the announcement of its own shop-in-shop partnership with Target. It plans to open 100 shop-in-shops this year. Currently, it has 1,262 stores; an Ulta company spokesperson stated that the company has a goal of operating 1,500-1,700 total stores in the U.S.

Though the Herald Square Ulta location will certainly attract New York City customers, it also has Tri-State and greater tourist potential, said Steelman.”It’s one of the prominent shopping retail corridors in New York City, and has the foot traffic of locals and the tourists. We feel really good about bringing the vitality back to New York; we’re going to play a big part in that, adding a lot of new jobs with this location,” she said.  The Herald Square location is expected to bring more than 100 jobs to the New York City area.

Integrating a digital-centric point of view into all stores will be key, especially for Ulta. “We’re going to continue to lean in on technology, because I don’t think that you’re going to see open testers or sampling come back soon. The technology keeps getting better, so we have to be on the forefront of it,” said Steelman. She added the company’s GlamLab virtual try-on feature saw an increase of 12X in usage in 2020, and 171 million shades were tried on. Ulta also kept customers coming back; 88% of GlamLab customers were repeat shoppers.