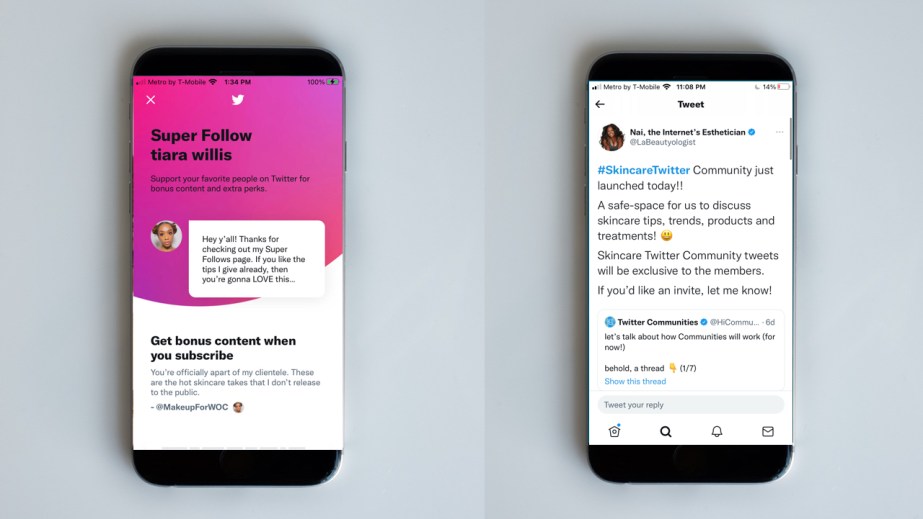 As Twitter rolls out new features for private and moderated content, the platform’s beauty influencers are leading the way.

While its Stories-esque Fleets were a no-go, Twitter’s latest features are reminiscent of Reddit and Patreon. Communities, launched on September 9, and Super Follows, launched on September 1, offer a more curated experience than Twitter’s main feed. These features’ early adopters include some of Twitter’s top beauty influencers, who received early access as the platform continues to invest in “Beauty Twitter.”

“I had a call with Twitter a few months ago where I introduced this concept to them,” said Lily Njoroge (@caveofbeauty on Twitter), esthetician and Topicals head of education, of the Communities feature. The concept: topic-specific, moderated groups accessible through a bottom menu bar on Twitter’s iOS app. Njoroge joined estheticians Tiara Willis (@makeupforWOC) and Nayamka Roberts-Smith (@LABeautyologist) in meetings with Twitter to help set up one of Twitter’s first communities, #SkincareTwitter.

Njoroge, Roberts-Smith and Willis serve as the moderators for the skin-care-focused group, where they answer questions focused on skin-care advice. Members often seek product recommendations, acne solutions and details on the moderators’ skin-care routines. Tweets are visible to anyone who has the update to see Communities on iOS, but only invited members are allowed to post.

“Beauty is a vibrant and growing conversation, and one of the most popular on Twitter. There have been over 11 million Tweets about skin care alone, so far this year. We saw an appetite for beauty and an opportunity to lean into a very dynamic lifestyle topic,” said Esther Crawford, product lead for creator monetization at Twitter.

The participating skin-care influencers see benefits in offering content moderation on Twitter, where they say they have come across harassment and misinformation on the platform.

“Twitter is the Wild West,” said Roberts-Smith. “The moderators are imperative to the success of the community and instilling the values of the community. Abuse is really rampant on Twitter.”

Groups are invite-only, with moderators granted unlimited invites. Each member is allowed to invite up to five people. The #SkincareTwitter group has over 600 members after being launched last week. In order to keep groups on topic, membership is closely curated.

“When you’re searching a hashtag, you’re getting tweets from people who may not necessarily be professionals. That was another big reason why we wanted to create a community with professionals moderating it, just to make sure that there isn’t misinformation being spread,” said Njoroge.

For example, dangerous TikTok “beauty hacks” have made their way onto Twitter, such as dermarolling with harsh acids. Roberts-Smith said she told her followers, “Please don’t do this.” She has also seen a lot of homemade beauty concoctions, such as jars of fruit and water that could contain bacteria.

“The worst that I’ve seen is people telling others that sunscreen is unnecessary for people of color and Black people,” said Njoroge. “That’s probably the most common thing that we debunk. That’s a myth we’re fighting pretty much every single day.”

Willis offers, “skin-care consultations, tea on skin-care brands I hate, how I perform procedures like pimple popping (extractions), giveaways and advice I only give to clients,” she tweeted on September 1.

“Creators are driving the conversations on Twitter, so we believe they should get paid for the value they are generating,” said Crawford. They receive up to 97% of revenue after in-app purchase fees on the first $50,000 they make from Super Follows, and then up to 80% after that.

“It’s great because it incentivizes tweeting for us big creators,” said Roberts-Smith, who has seen many users plagiarize her Tweets. She has not used other monetization platforms such as Substack or Patreon, because “it’s very difficult to get people to move platforms. [And] I don’t like those platforms. I like Twitter.”