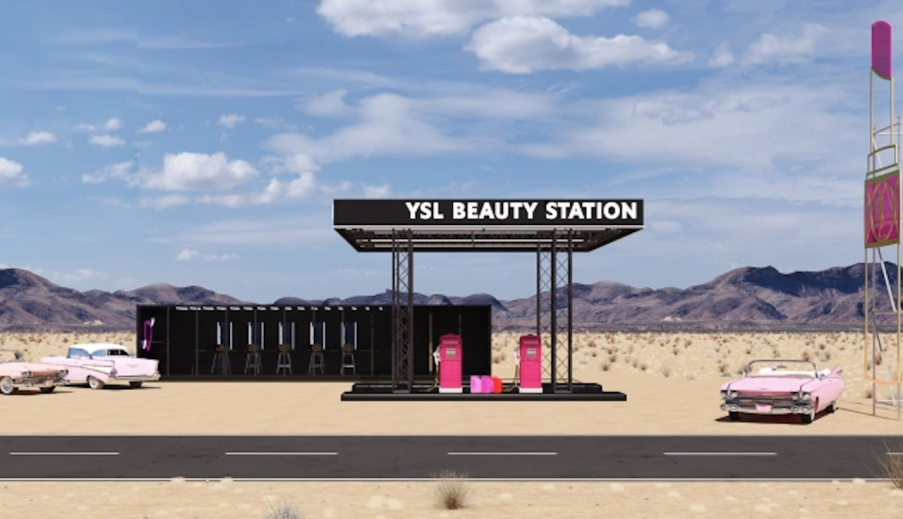 ‘There’s definitely been a decline’: Fashion and beauty brands pull back on Coachella

En route to the music festival, Coachella-goers can visit YSL Beauty’s gas station activation in Cathedral City, Palm Springs, to get a first look at the brand’s new products. An outsize replica of brand’s Rouge Volupté Shine lipstick will be on hand, alongside exclusive product launches — including the new Sequin Crush Mono Eyeshadow — and customization options for YSL Beauty’s Rouge Pur Couture lipstick.

An iteration of the brand’s retail and experiential pop-up dubbed YSL Beauty Hotel, previously held in New York and Paris in 2018, the Coachella activation marks the beauty company’s first public facing event at the music festival. YSL Beauty partnered with Tmall on the pop-up, which will kick off with a private event on April 11. In attendance will be 70-plus key opinion leaders from China, including Jiayuan Dou, a cosplayer and singer; Lexie Liu, a rapper and songwriter; and Yang Yunqing (known by stage name Sunnee). The Coachella experience will be livestreamed in China and then re-promoted on Tmall’s Super Brand Day, a 24-hour period on April 23 offering experiences, promotions, flash sales and special offers on the Tmall storefront, said Bo Liu, president of Tmall Marketing.

YSL Beauty and Tmall may be going full throttle at Coachella, but other brands, both fashion and beauty, have been scaling back in recent years, and others have changed their approach.

Though Sephora activated at Coachella four times between 2014 and 2018 — last year, it served as the official beauty partner, granting festival-goers the chance to get their hair and makeup done for free, in a WiFi-enabled, air-conditioned tent. It has chosen to play a smaller part this year, as part of Zoeasis, put on by The Zoe Report and Rachel Zoe. Eight-time official festival sponsor H&M, which previously created a Coachella clothing line, bowed out in 2018. This year, it will be flying and hosting 22 members of its first influencer ambassador program, called “The H&M League” (including Brittany Xavier and Mariale Marrero), instead of hosting a massive customer event. And between 2017 and 2018, Urban Decay, Too Faced, Kiehl’s, and Maybelline hosted VIP experiences for their influencer squads but didn’t pull the trigger last year.

“There’s definitely been a decline in activations, especially larger-branded experiences,” said Conor Begley, Tribe Dynamics co-founder. “If you think about the brands that have done well at Coachella, like Anastasia Beverly Hills in 2018, it wasn’t because they did a big event but because people were just wearing the product and organically repping the brand. It’s similar to what we see at fashion weeks: Brands think runway shows are garnering all the coverage, but it is what people are wearing to the shows that drives engagement.”

Anastasia Beverly Hills boasted the largest community of festival-going influencers in 2018, with 185 ambassadors driving $1.3 million in earned media value [EMV], while Huda Beauty drove over $777,000 EMV across 114 influencers (more than half of whom tagged the brand more than once). Neither hosted a branded experience.

Meanwhile, brands with official Coachella activations, like Revolve and NYX Professional Makeup, have suffered from boom-and-bust experiences. Per Tribe Dynamics, influencer Camila Coelho, who ranked as one of Revolve’s top ambassadors in EMV for its #RevolveFestival activation in April 2018, created 28 Coachella posts totaling $1.3 million EMV but did not post about Revolve in May or June 2018. Adelaine Morin, NYX Professional Makeup’s top-earning EMV Coachella attendee, created eight pieces of content about the brand in April 2018 (totaling over $460,000 EMV), followed by only one post in May and zero in June.

Brian Salzman, founder and CEO of relationship marketing agency RQ, explained the reason for this post-Coachella radio silence: Often, influencers that are a fit with Coachella don’t feel authentic to the brand the other 362 days of the year.

“Coachella is an influencer goldmine, probably one of the biggest gatherings of influencer transactions in one place,” he said. “Every influencer wants to go, and if a brand facilitates that by giving them a free ticket or inviting them to part of an experience, they will go. It’s up to the brand to use them [effectively] by building a larger message or long-term conversation.”

Ashley Villa, Rare Global CEO and partner, who represents influencers like Alyssa Wallace (known as Alyssa Forever), Jackie Aina and Wengie, said brands get what they pay for, especially those trading Coachella tickets for social coverage. “A $1,000 VIP wristband doesn’t equate to a social campaign that is usually more than $100,000,” she said.

Wallace, for her part, will be attending this year’s festival as a guest of Revolve. “Coachella is about work for me, more than it is about the festival,” she said. “It is an opportunity to meet in-person with the brands and see the creative ways they’re working with other content creators.” Rare Global and Revolve would not detail financial and social agreement terms.

YSL Beauty’s and H&M’s on-site experiences are meant to create some exclusivity and intimacy within the noise. Kaia Gerber and YSL Beauty creative director Tom Pecheux will make appearances at YSL Beauty’s setup to create exclusive, Palm Springs-inspired YSL Makeup looks and content. Influencers Teni Panosian and Melissa Alatorre, as well as musician Kiana Lede, will also be joining the brand. All of the aforementioned ambassadors’ content will be cross-promoted across YSL Beauty’s social channels — on Facebook, the brand has 4 million followers, and on Instagram, it has 5.7 million. Though YSL would not detail projections for the desert activation, Verane DeMarffy, YSL Beauty svp, said it is much larger in scale than the brand’s two pop-ups last year, which together saw $500 million EMV on social media and $600K EMV in PR impressions.

“It is a very powerful way to bring the brand to life — it’s really like media for the brand. Forty-six thousand people drive through Cathedral City during this time of year, so we believe festival-goers will stop and tell friends to come out and experience the YSL Beauty Station,” she said.

Tmall’s involvement will make Coachella an international event, while bringing its Super Brand Day experience outside of China. Building on the partnership, YSL Beauty will pre-launch special shades of the Volupté Shine lipsticks in China via Tmall, timed to Coachella.

“With this event in Palm Springs, YSL can showcase its unique brand personality to consumers celebrating Super Brand Day on Tmall,” said Liu. “It also highlights the importance YSL has placed on dedicating global resources to content in order to build connections with their consumers.”