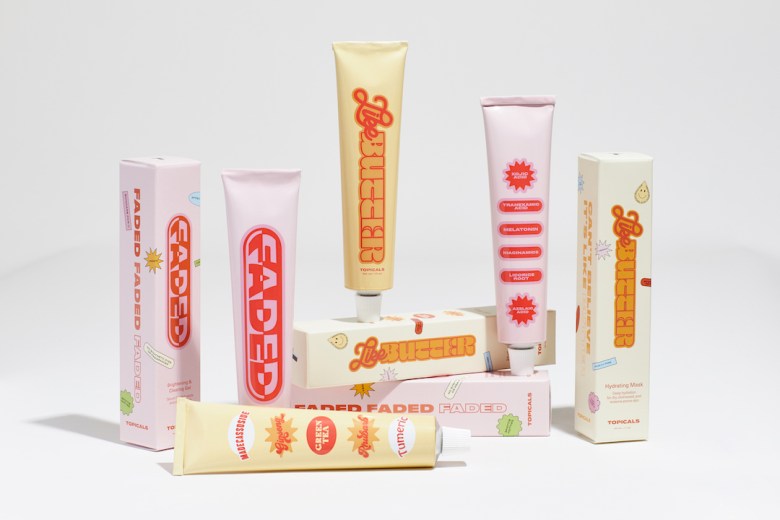 The fight for inclusivity finally comes to skin care

Despite venture capital and private equity firms being called out for the part they play in perpetuating inequity and inequality, there are signs change is coming. Soon-to-be-launched, Black-owned beauty brand Topicals is one company bucking the odds.

Topicals comes to market on August 7 on its DTC site, Nordstrom.com and in four Nordstrom stores via its Pop-In concept. It has already raised $1 million in venture capital funding from Lerer Hippeau, Netflix CMO Bozoma Saint John and entrepreneur Hannah Bronfman, among others. Olamide Olowe, co-founder and CEO of Topicals, is hoping to on-board more women of color to the cap table and is working to raise more funding in the final two weeks before the brand debuts. Industry sources told Glossy that Topicals is expected to raise at least another $1 million.

Co-founded by Olowe and Claudia Teng — both age 23 — Topicals is a line of beauty products that is attempting to bring the conversation of inclusivity, which has reverberated in makeup, to skin care. Topicals is centered around solving chronic skin issues like eczema, hyperpigmentation and psoriasis for BIPOC consumers.

Olowe and Teng both grew up with skin conditions: Olowe has hyperpigmentation and post barbae folliculitis, and Teng has severe eczema. Both had plans to work in dermatology, but the former decided to change her direction after being given opportunity to co-create SheaGirl, SheaMoisture’s younger female brand, between 2015-2017. Her partner in the process was a fellow UCLA student, Rechelle Dennis, the daughter of SheaMoisture founder Richelieu Dennis.

“It was the first time I understood what it was like to serve underserved communities. Our beauty experience is not like it is for white women,” said Olowe. “Armed with that knowledge and business expertise, we thought we could build something for women like us, that have chronic skin conditions.”

More than 19% of African-American children have atopic dermatitis, compared to 16.1% of white children and 7.8 percent of Asian children, according to National Health and Nutrition Examination Survey. They’re also 1.7-times more likely to develop atopic dermatitis than white children. While working in clinical research, Teng found that people of color were sorely underrepresented in clinical trials for treatments. Minorities account for less than 10% of patients enrolled in clinical trials, according to the National Institute on Minority Health and Health Disparities. And dermatologists, too, often don’t have the education to treat darker skin tones. According to the Journal of the American Academy of Dermatology, only 12.2% of medical residency program directors reported a rotation in which residents gained specific experience in treating patients with skin of color.

“Topicals is all about changing that narrative,” said Teng. “There are ingredients like hydroquinone that are quite popular or widespread, but they can have bad side effects on darker skin. That is being perpetuated as the gold standard for hyperpigmentation, for example, but it is because there is a lack of research with people of color in mind.”

Fittingly, Topicals has ensured all of its formulations have been tested on all types of skin tones. “We wanted to make better and gentler products for all kinds of skin, but also wanted to make the experience of using them more fun and enjoyable,” said Olowe.

Unlike every adjacent category getting a millennial beauty branding update — including body wash, deodorant, toothpaste and sexual wellness — products for skin conditions have remained clinical in look and feel. For instance, the National Eczema Association’s Seal of Acceptance gives its stamp of approval to moisturizers like CeraVe and MG217 that are found in drug stores with medical-esque typography and white bottles. Meanwhile, Topicals’ two debut products, “Like Butter” for customers with dry skin and eczema, and “Faded,” for consumers with discoloration and dark spots, exude the vibes of Drunk Elephant or Glossier. Bigger companies like Guthy Renker — with its Sea Calm Skin, launched last August —  are also trying to update these kinds of products for shoppers; Sea Calm Skin’s look, however, is more minimal.

“For people with chronic skin conditions, there is no cure, so talking about perfecting or curing your skin isn’t the brand we wanted to be,” said Olowe.

Since August 2019, Olowe and Teng have not only on focused on testing and formulating products on diverse skin tones, but also on creating a dialogue with that community. Topicals has a 10,000-plus email newsletter base, more than 6,000 followers on Twitter and nearly 3,100 followers on Instagram; it is using the branding “funner flareups” in email and social posts to make these conditions less stigmatized.

Both Olowe and Teng said they’ve created branding with their community, and are offering up relevant content via social media to their Gen-Z and millennial base. For example, Topicals offered up a tear gas irritation resource guide, because Olowe and Teng expected that fans of their brand would be protesting in support of Black Lives Matter. The first post of the Twitter thread had 959 retweets and comments. The company has served up digital-only activations during Covid-19, including virtual “sleepovers” and an interactive horoscope game called “Sun, Skin and Stars.” In the game, customers input their birth date and top three skin concerns, and they were then offered up advice with recommended ingredients based on those skin concerns.

Teng said that, oftentimes, the beauty industry overwhelms the consumer with chronic skin issues — not to mention all consumers — with “too many products.” So although Topicals’ product roadmap is robust, it will a keep a targeted use-case focus.

Despite the overwhelming no-brainer of making products like CeraVe and MG217 for young shoppers and women and men of color, Topicals path to investment wasn’t exactly easy. Olowe said it was a two-year endeavor.

“I’m not going to lie; it’s been a battle. I heard ‘no’ from over 100 different investors,” said Olowe, who started pitching in August 2018. “What people don’t realize is that, when you make a product for darker skin tones, you actually are making better products for the whole beauty community. It’s false to think that skin care isn’t part of that conversation that Fenty started with 40 shades. Every industry has to do better, especially if your product is damaging to darker skin tones or not good enough. We are pioneering that reckoning in skin care.”