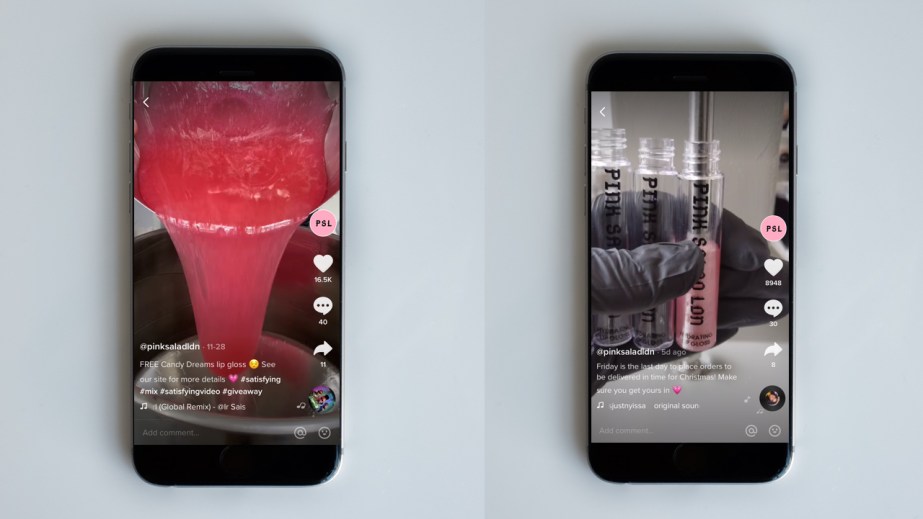 Less than two years ago, Stacy Akinpelu-Morris was a mechanical engineering student in London making her own lip glosses for fun. Today, she has 2.3 million TikTok followers and runs her own lip gloss brand via a newly opened factory.

The rise of her brand Pink Salad LDN highlights that the potential for rapid TikTok follower growth: Not only can it propel the careers of influencers, but it can also bolster small businesses that find success with its mysterious algorithm.

Now 24 years old, Akinpelu-Morris first started making lip gloss from home in early 2019. Like many college students, “I didn’t have the budget for the more expensive luxury brands, but I still wanted something really nice because I didn’t like the cheaper drugstore brands,” she said. Unlike a typical college student, though, she took matters into her own hands. She researched and ordered the ingredients online. “Google is everyone’s friend,” she said. For fun, she posted her lip gloss-making process on TikTok. The video went viral, and she gained 6,000 followers in one night.

“None of my friends had heard of TikTok. It was just a bit mad,” she said. Her new followers started inquiring about whether they could purchase the lip gloss. When she made her first swath of products available for sale, she received 150 orders in a week.

Things took off from there. After posting her first video on Pink Salad LDN’s account in April 2019, she reached 1 million followers in one year. She more than doubled that number over the next eight months. Now that she has graduated, she’s producing Pink Salad out of a factory she opened in Poland in March. She decided to make the country her central hub, due to cheaper costs and “Brexit looming in the distance,” she said.

“None of us had supply chain experience,” she said of her team, which is almost entirely Gen Z — the oldest employee is 26. “It was definitely quite a challenge of figuring out what shipping terms mean, what FOB [free on board] means — all of this lingo that they use in that whole world. It was quite scary at first. We got our heads around it, and it was OK in the end,” she said.

Sales have been significant. Akinpelu-Morris estimates that the brand has sold 88,000 units since its founding in April 2019. It recently launched a DIY at-home lip-gloss kit that sold out. The brand sells online through a DTC shop and is in the process of pursuing retailer partnerships for 2021.

TikTok remains the main social marketing focus for the brand. Its videos consist mainly of lip glosses being mixed or poured into tubes, which Akinpelu-Morris believes is popular because it creates a form of what she calls “visual ASMR.”

“People really enjoy satisfying things” on TikTok, said Akinpelu-Morris. “I think it has a lot to do with psychology.”

In order to build brand awareness, Pink Salad gifts products to TikTok influencers and launches promotions to interact with its customer base. It is currently hiding “golden tickets” in packages, and winners will get to participate in its spring campaign.

Akinpelu-Morris’ brand is one of several DIY lip-gloss labels that have gone viral on TikTok. Another brand called Lip Gloss Drip has 2.5 million followers and posts similar videos of the lip gloss-making process. It previously sold its products via a store on e-commerce platform Big Cartel. That store now links to a soon-to-be-opened Shopify-powered shop. Melonade Lip Gloss, meanwhile, has nearly 400,000 followers and sells through and Etsy shop.

The follower counts that these Gen Z-founded, DIY brands have amassed are significantly larger than the major beauty brands that have joined TikTok so far. E.l.f., one of the earliest and most successful beauty brands on TikTok based on campaign performance, has 282,400 followers. NYX Cosmetics, which has also invested heavily in sponsored campaigns, has 56,200.

“TikTok tends to be a bit wild,” said Akinpelu-Morris. “You never know what video is going to go viral.” But she noted that “people love to support small businesses” on TikTok. “People know that, behind this little brand, is an actual person. It’s easier to connect with someone like that, or with a brand like that.”