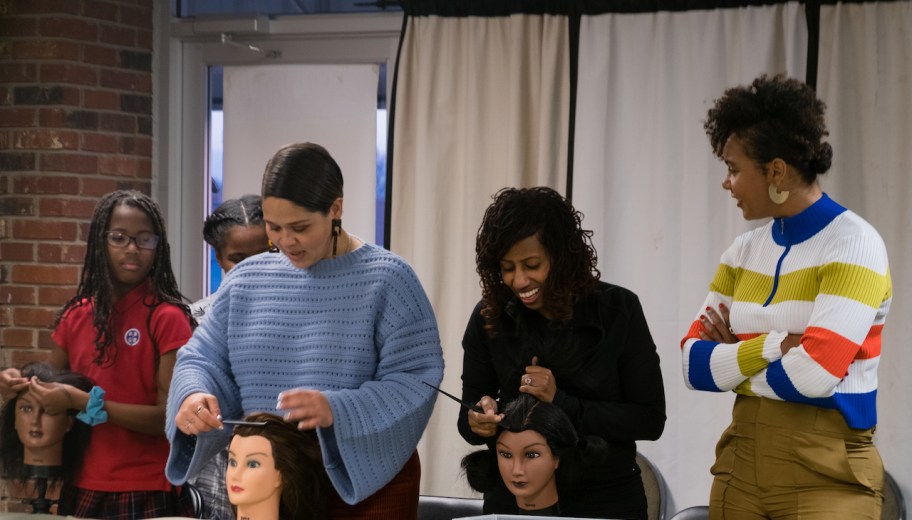 Direct-to-consumer e-commerce platform Shopify is doubling down on its beauty proposition with a new video series dubbed “Beauty Mark.”

Created by the recently formed Shopify Studios, a full-service film and television production house that follows a Netflix-like model of cultivating content in house, “Beauty Mark” debuts exclusively on YouTube on Wednesday. Shopify has 132,000 subscribers on YouTube, and some videos, like a short clip featuring watch brand MVMT’s origin story has over 1.4 million views and counting.

“Beauty Mark” is hosted by influencers Jess Sanchez and Rachel Hale, and follows a similar model as the MVMT video as it also centers on a brand’s story. However, the “Beauty Mark” series is longer in format and features an all-female cast of beauty entrepreneurs. Cashmere Nicole, CEO and founder of indie makeup line Beauty Bakerie, and Kari Jansen, an herbalist and Ayurvedic practitioner behind the California-based company Poppy and Someday, have dedicated episodes in the five-part series. Other brands included are Naturally Speaking, Mississippi’s first licensed braiding and natural hair salon; makeup brand Bésame Cosmetics; and organic skin-care line Amina’s Natural Skincare. All five brands’ e-commerce businesses are powered by Shopify.

“When we were looking at who ran the beauty industry, it is geared toward women, but, essentially, many of the big businesses out there have been run by men,” said Tammi Downey, Shopify Studios senior supervising producer. “We wanted to focus on female entrepreneurs in the space, who are breaking new ground.” Downey added that, while the number of women-led businesses have increased in the last year, their stories remain largely “untold.”

Hale said she wanted the series to move beyond the perception that the beauty business is “surface-only.” “There is so much more to beauty than what people initially think, and when you see the diversity of businesses and geographies in the series, you see a different conversation take place.”

Since its creation in late January, Shopify Studios has released an initial content series: a podcast called Vanguard by Shopify Studios, which explores unexpected businesses from subcultures, like tarot card readers. But beauty is a big business for the company at large. Of the over 800,000 merchant businesses on Shopify, Downey said beauty is one of its largest verticals. Its biggest beauty brands include Kylie Cosmetics, KKW Beauty and ColourPop. Much of Kylie Cosmetics’ estimated $360 million revenue last year came through her Shopify-powered website, as she only entered select Ulta doors in November 2018. Shopify would not disclose the percentage of beauty brands on its platform.

Though Downey said that in order to qualify for the “Beauty Mark” series, a business or founder does not have to run their e-commerce site through the platform. It worked out that way when Shopify Studios began researching talent nearly a year ago. According to Downey, the “Beauty Mark” booking process itself included a deep dive on the businesses via their “About” pages and several months of phone calls before filming began last summer.

For its part, Shopify, which is estimated to make $1.4 billion in revenue in 2019, has been dabbling in a bevy of new ways to engage with its business’s clients and their respective consumers. During New York Fashion Week in February, 11 Honoré show attendees could shop runway looks via QR codes as they debuted, and Shopify sponsored an 11 Honoré pop-up for customers to buy said styles. In fall 2018, Shopify also began offering physical retail guidance to its e-commerce merchants through its new toolkits.

Shopify will be promoting the series on its social media accounts — it has 286,000 followers on Instagram and 3.4 million followers on Facebook. Meanwhile, the select beauty businesses are not contracted to promote “Beauty Mark” on their channels.

That YouTube was selected for the series versus IGTV or Facebook Watch was to attract the existing beauty enthusiast on their platform of choice. According to Statista, in 2018, beauty-related content generated more than 169 billion views on YouTube.

Marrying that YouTube audience with Shopify was a draw for Gabriela Hernandez, founder of Bésame Cosmetics. “I was excited to share the Besame story to show how my creative process is rooted in history,” she said of her vintage-inspired line. “Shopify has been a vital piece of our corporate infrastructure since 2014, to make sure our customers have a unique and engaging experience when they visit our site.”

Downey would not share any further Shopify Studio plans for more beauty-centric shows, but beauty influencer and actress Shay Mitchell will debut a new travel video through Shopify called “Unpacking Business with Shay Mitchell.” It airs on YouTube on March 6, as well.