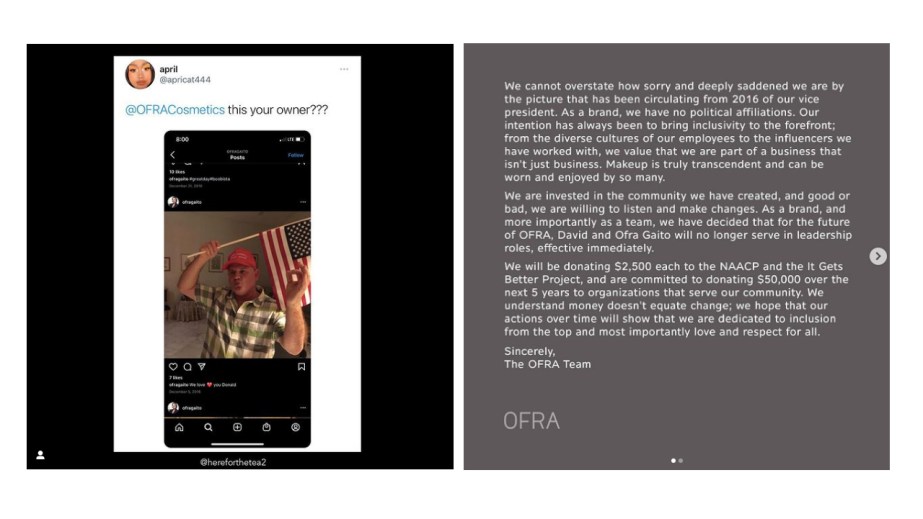 Ofra Cosmetics president Ofra Gaito and vp David Gaito announced their resignation from their leadership roles in the company on Monday following an online outcry. The anger was sparked by a recently discovered photo of David Gaito making a hand gesture now officially recognized as a hate symbol.

On June 1, the brand announced on its social channels that the leadership change would be effective immediately, stating it was “sorry and deeply saddened” about the photo in question, and pledging to donate to the NAACP, It Gets Better Project and other “organizations that serve our community.” While the brand did not respond to a request for comment, the company will reportedly be led by its current COO, according to video commentary made by beauty YouTuber Manny Gutierrez (Manny MUA) after he spoke to the brand. The COO appears to be the Gaitos’ daughter Carine Trezza, who lists this as her position on LinkedIn.

The screenshot depicts a post on Ofra Gaito’s personal Instagram account from December 2016 showing her husband David Gaito wearing a MAGA hat and making an “OK” hand gesture that has since been labeled as a hate symbol by the Anti-Defamation League. Earlier this week, Ofra Cosmetics also released a personal apology from David Gaito stating the gesture was not meant to be “malicious or in support of white supremacy.” The photo was posted a month after notorious neo-Nazi Richard Spencer posed in front of Trump’s D.C. hotel making the same hand gesture. The Southern Poverty Law Center notes that alt-right and white supremacist figures were first seen posting photos with this hand symbol beginning in 2015.

The photo was posted on Twitter by a user named April (@apricat444) on May 24, and was then picked up by influencer tea account Here for the Tea (132,000 followers), as well as beauty industry watchdog account Estée Laundry (186,000 followers), generating the recent online backlash. According to April’s tweet, the photo had been visible on the account until this time, though did not attract widespread attention. Major beauty influencers and Ofra collaborators including Gutierrez, Nikki de Jager (NikkiTutorials), Jen Luv, Samantha March, Stephanie Toms and Lauren Mae have made statements condemning the photo on their social channels.

Influencers’ decisions on how to move forward with the brand have varied. “There were a few influencers who right away were like, ‘No, this is absolutely unacceptable,’ and then there were some who were going to wait it out and see,” said Here for the Tea’s account owner, who only goes by her first name, Sam, for privacy purposes. Here for the Tea cataloged influencers’ responses over the last week. Sam said that De Jager was especially “someone who everybody was looking to talk about it because she’s collabed with them many times.”

De Jager released a statement on Instagram Stories on May 28 stating that she was “mortified and disgusted,” and “will not accept or associate [with] this behavior.” Regarding her collaboration collection currently sold by Ofra, she stated she is talking to the brand and will “take action concerning my collaboration products” once she receives “more answers.”

Gutierrez, who also has a current collaboration with the brand, stated in his video, “I was very upset about it. I just can’t be a supporter of someone who supports that,” referring to both the hand gesture and Gaito’s broader support of Trump. Gutierrez recently appeared in a video with President Joe Biden to encourage Americans to get vaccinated.

Regarding his decision on the collaboration, he said, “Basically, the only change I really wanted to happen was for David to step down, and that’s actually what’s happening. I’m not going to say that I’m going to completely de-affiliate with them. As of right at this moment, I’m going to see, I’m going to wait, I’m going to kind of see what’s going on.”

Here for the Tea also posted about Gaito’s political contributions. According to the Federal Elections Commission, a series of monthly recurring donations to Donald J. Trump for President, Inc. and Trump Make America Great Again Committee occurred between July 9, 2019 and July 9, 2020 on behalf of David Gaito of Pompano Beach, Florida, which is where Ofra Cosmetics is registered. The occupation for this donor is listed as “Entrepreneur.” Another listing for David Gaito shows one donation to Republican Congresswoman Virginia Foxx in 2013, with Ofra Cosmetics listed as his business.

David Gaito is currently registered as the authorized person for Ofra Cosmetics LLC, according to the Division of Corporations for the state of Florida.

According to Sam, beauty enthusiasts are just as interested in beauty brand owners’ political and social positions as they are in the products they sell. In recent years, her own coverage has expanded beyond beauty influencer drama to political and social issues. “In 2016, I wasn’t talking about this — I was talking about who liked the shady tweet, who’s shading each other on Twitter and who’s friends with whom,” she said. Now, “people want to know where their money’s going.”