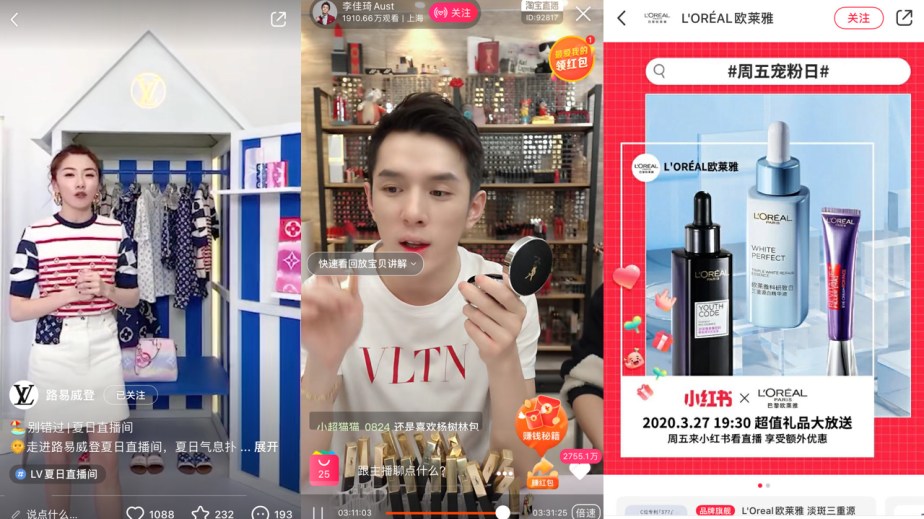 Livestreaming is ‘here to stay’ in China’s post-lockdown era

As China is starting to show signs of recovery from its own coronavirus lockdown period, livestreaming options have sprung up on a wide variety of platforms.

In 2019, livestreaming commerce sales in China reached an estimated $61 billion, according to iiMedia, a number now expected to more than double to $129 billion in 2020. Once concentrated mainly on Taobao Live and livestreaming-specific platforms like Yizhibo, livestreaming is being increasingly emphasized by China’s top tech platforms like Douyin (the Chinese version of TikTok), mobile messaging app WeChat, social shopping app Xiaohongshu (or “Red”) and video platform Bilibili.

“Livestreaming is definitely the big thing in 2020,” in China, said Andrea Fenn, the founder and CEO of Shanghai-based digital agency Fireworks. “I think livestreaming provides a level of localization and normalization.”

Alibaba’s Taobao Live platform is still the undisputed leader of commerce livestreams. In February, during the height of the coronavirus lockdown in China, the number of merchants on the Taobao livestreaming platform increased by 719%.

Now, other platforms are stepping up to develop their own capabilities. Red, which functions as a mashup of Instagram and Pinterest in China and is known for shopping-related posts and product reviews, has doubled down on livestreaming since the coronavirus outbreak. Louis Vuitton became the first major international luxury brand to host a livestream on the platform, showcasing the brand’s summer collection in a one-hour event on March 26. Beauty companies are also getting in on Red livestreaming: L’Oréal hosted a livestream on the platform on March 18, promoting giveaways, offers and coupons ahead of time to encourage views.

The coronavirus lockdown was effective at “getting some of the brands that weren’t willing to go outside of the box before” to do so, said Iris Chan, a partner at Digital Luxury Group. “They are more willing to [now] because their hands are kind of forced to.”

Miro Li, the founder of Shenzhen-based social media consultancy Double V, noted that Red has been increasing livestreaming capabilities as a new experiment with monetization. “The commercialization is not so successful on Red because its market share of e-commerce is really small compared with Tmall or JD.com,” Li said.

WeChat has also been amping up its livestreaming capabilities with the launch of its Kandian livestreaming Mini Program in early March. Aimed at increasing Taobao-style livestream shopping, the Mini Program allows both influencers and merchants to livestream and link to purchase products through HTML5 pages or connected Mini Programs.

One of the first beauty brands to leverage WeChat’s new livestreaming capabilities was the Sequoia-backed beauty startup Perfect Diary. According to a report by Reuter Communications, nearly 1,000 fashion, beauty and lifestyle brands live-streamed on WeChat Mini Programs for International Women’s Day on March 8, causing WeChat social commerce traffic to increase by 83%.

Livestreaming has helped to keep users on platforms longer than other forms of media. During the height of the Covid-19 epidemic in China in February, users spent an average of 120 minutes watching livestreams on Douyin, and 89 minutes watching other forms of content on the app daily, according to Daxue Consulting. For comparison, the average TikTok user spent about 45 minutes a day on the app in 2019. On Bilibili, they watched 190 minutes of livestreaming compared to 105 minutes of other video content. During the Chinese New Year holiday period when people were quarantined inside, overall Douyin usage increased by 102% thanks to livestreamed entertainment content like “cloud raves.”

Livestreaming is “definitely here to stay,” said Chloe Reuter, the founder of Shanghai-based Reuter Communications. Even though China is in recovery mode, “I don’t think that we wave a magic wand and say, ‘Oh everything’s great now,’ and we get back to how it was,” she said. She predicts that people will probably be more cautious for “a number of years” about attending large events or traveling.

According to Chan, livestreaming of offline activations will become “more essential and more necessary” in the post-coronavirus era because it allows brands to have more agility.

“In general, these forces have favored companies and brands that are digital and have strengthened the digital presence in China,” said Fenn.