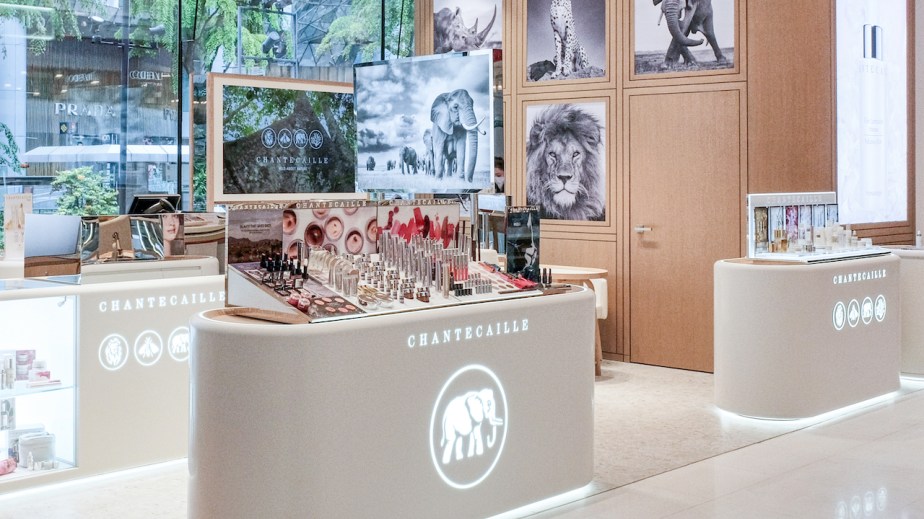 ‘I want to build something for the future’: Chantecaille doubles down on Asia stores

While U.S. physical beauty retail landscape remains crippled by the pandemic, Chantecaille is betting on an Asia rebound.

Between March and August, the luxury skin-care and cosmetics brand opened four new physical locations across Asia. These include a spa and beauty counter in South Korea, as well as counters in Singapore and Hong Kong. Planned before the pandemic and comprising several duty-free locations, the stores reflect hotspots for Chinese travelers, as around 35% of the brand’s sales are to Chinese consumers.

“It sounds crazy to do this at this time when everything is stopped, in a way, but I have a very strong business in Asia,” said the brand’s founder Sylvie Chantecaille.

The focus on the rapidly growing Chinese travel shopping market had been a natural move for brands in the luxury space prior to the pandemic. This was the case for Chantecaille, as well, which now has eight duty-free locations in Asia.

“Pre-Covid[-19], the duty-free stores were doing 10-times more than the regular store” in both overall volume and growth, said Chantecaille. The brand had been planning on duty-free sales increasing its business globally by 40% before the pandemic hit.

Duty-free retailers have been finding ways to adjust to the decline. In South Korea, which was heavily reliant on Chinese spending in travel retail and saw a 39% year-over-year decline in duty-free sales in July, the Korea Customs Service (KCS) launched a program that runs through September 29 allowing duty-free retailers to distribute unsold goods in domestic channels.

South Korea, which has had the second-best performing economy behind China during the pandemic, has been the “most successful” market in Asia for Chantecaille this year. “The retail stores are up from last year,” she said. The brand’s recent openings include a counter at the Galleria Gwanggyo in Seoul in March and its first spa in South Korea at the Hotel Lotte Signiel Busan in June. Two months ago, it also unveiled the renovation of its Lotte Duty Free counter that began as a pop-up in 2017 and became permanent in 2019. In South Korea, “duty free has suffered, but it’s not really a disaster,” she said.

The brand’s Asia sales have also gone against the “self-care effect” that has caused skin care to overtake color cosmetics sales during the pandemic, said Chantecaille.

“We’re seeing a lot of makeup being sold. You would think, with the masks, that it wouldn’t be as much. We’re selling tons of lipsticks.” She said that, pre-pandemic, the brand was “more skewed toward skin care.” But now, the brand is split 50-50 between skin care and makeup, with makeup comprising 75% of the brand’s DTC sites sales. She cited the brand’s online virtual makeup consultations as a factor in driving up color cosmetics sales. “Our strategy has been to really reach the customer, personally, as much as we can, and to develop our website while we continue to support our retail partners.” The company launched DTC e-commerce distribution in Taiwan in July, and plans to launch South Korea and Singapore e-commerce by the end of this year.

Chantecaille also sells online to China cross-border through Tmall, which makes up an estimated 10% of its business. Data has shown strong demand for beauty in China, as NPD Group found that beauty e-commerce sales in China increased by 87% year-over-year in June. For China’s 6.18 online shopping festival, makeup sales increased by 58% year-over-year.

Sylvie Chantecaille said that Hong Kong retail, meanwhile, has been “the most affected” due to the combination of Covid-19 and political upheavals. The brand opened its duty-free counter at Sunplaza Duty Free there on August 1.

The brand’s July 31 opening in Singapore at Tang’s Department Store came after it complied with Singapore’s two-week quarantine to get staff into Singapore. “Nothing is easy right now in Asia,” said Chantecaille.

Outside of Asia, it has several openings on hold, including a duty-free location at Los Angeles Airport. as well as one at LVMH-owned La Samaritaine. The latter was initially planned for April 2020 but is now expected to open in 2021.

Chantecaille is no stranger to weathering downturns.

“We grew our business dramatically in 2008, when everybody was dying,” she said. “Right now, nobody’s traveling, but at the same time, I want to build something for the future,” she said.