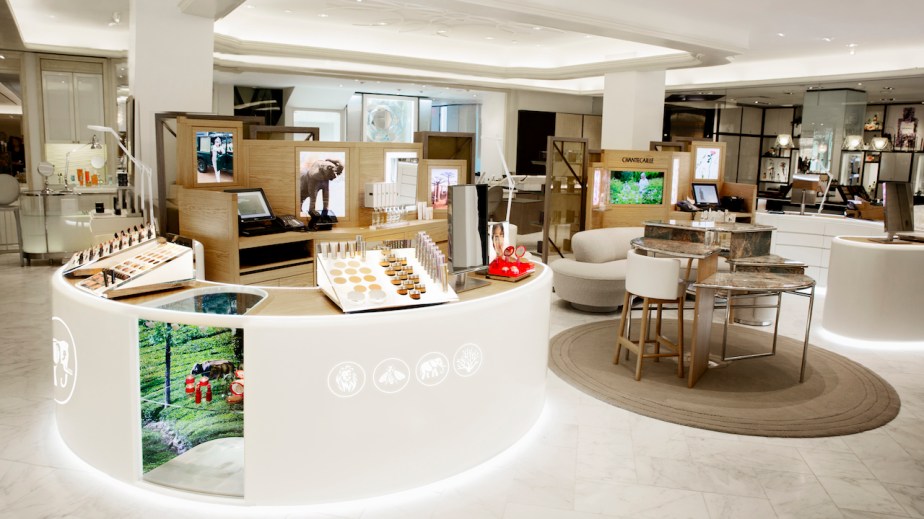 How Chantecaille is modernizing its presence at the beauty counter

Prestige beauty company Chantecaille is using one-of-a-kind retail concepts that it began testing in international markets to combat the tough brick-and-mortar climate in the U.S.

This month, the 22-year-old brand brought its revamped store counter concept, which was designed to offer a more “residential feel,” to Bergdorf Goodman — it involved Chantecaille tripling its prior space to 300 square feet. The beauty counter was customized for Bergdorf Goodman and is the first experience of its kind by Chantecaille in the U.S., but it mirrors what the company has piloted over the last 18 months in other top retailers like Lane Crawford in Hong Kong; NK Stockholm in Sweden; and Lotte, Hyundai and Shinsegae in Korea.

Chantecaille would not disclose its sales in Bergdorf Goodman, specifically, but overall, the company doubled retail sales in 2018 to $200 million, thanks to expanded distribution in Blue Mercury stores in the states. The U.S. now accounts for 42% of its total sales, while Asian markets have been leading its business at 47%.

“Almost two years ago, I wanted to recreate our look completely and speak more to who we really are. We are a natural brand, and we didn’t have anything that told that story,” said president and chief executive Sylvie Chantecaille. “Our business is very strong in Bergdorf, so we needed something powerful.”

Within the new Bergdorf display, Chantecaille products, which sell at a premium price, such as $420 for a 24-karat gold face cream, are displayed alongside images showing where ingredients are sourced and how products like its Lip Veil lipsticks support endangered Asian elephants. In 2019, Chantecaille plans to take the design and offering to Europe with a focus on London.

“We wanted to create a space that customers would want to spend time in to discover, be it fragrance or a new lipstick range for fall. We may expand on this vision in the form of free-standing stores. We have so many ideas for how to share our passion for wild animals and botanicals, as well as our growing range of foundations. Our own stores could be a playground for all those concepts,” said Alex Chantecaille, vp of sales and promotions. For now, the brand has only two standalone locations in Hong Kong and Taipei; its direct channels (which include its e-commerce site) are responsible for 2% of total global sales.

Chantecaille is sold in 310 retail stores in North America. Other than Bergdorf Goodman, key partners include Neiman Marcus, Saks Fifth Avenue, Nordstrom, Blue Mercury and Holt Renfrew (475 globally). Sylvie Chantecaille said the new experience is not designed to be rolled out across all doors, to ensure a surprise factor for local audiences. Neiman Marcus Hudson Yards’ new outpost was not selected for this redesign because of its mall-like quality, she said.

Still, variations of the experience will debut with Hong Kong-based travel retailer DFS Group: In November, Chantecaille will open in the Waikiki neighborhood of Honolulu, and in December, the brand will launch in Hong Kong’s Sun Plaza, Macau’s City of Dreams and Los Angeles International Airport. Prior, the company was only present in four travel locations in Korea; in 2018, travel retail accounted for 25% of the company’s total business, but Sylvie Chantecaille expects that number to hit 45% in the next year.

“When you have great partners, you have to reward them,” said Sylvie Chantecaille. “Everyone else may have given up on their retailers, but I do really well with them. You have to make things exciting, and the customers will come.”