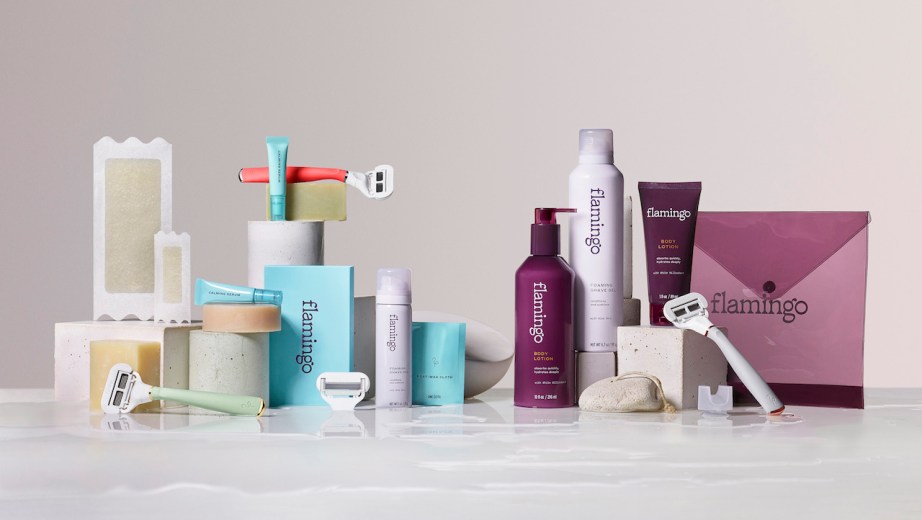 On Feb. 4, Flamingo’s full-size razors, shaving gels, body lotions and face and wax kits rolled out to all 1,800 Target locations and Target.com in the personal-care department. Though it took Harry’s three years to partner with a third-party wholesale channel after first launching in 2013, Flamingo’s entrance into Target came less than four months after its October 2018 debut.

Christina Hennington, svp of beauty, essentials, hardlines and services at Target, said Flamingo’s curation of shaving and wax products fits into the retailer’s “digitally native” brand strategy, which involves bringing DTC-first companies onto its shelves and site for newness.

When Harrys’ expanded into Target in 2016, it “resulted in a revamp of the category as a whole, bringing consumers back to the men’s grooming aisles,” said Kayla Villena, senior research analyst at Euromonitor International. Since, Target has on-boarded a slew of digital upstarts, from cosmetics brand Makeup Geek to toothbrush company Quip.

The women-centric brand is betting on past lessons from Harry’s experience in Target and also carefully examining the differences between the beauty department and personal-care experiences in stores to succeed.

“We took our cues from beauty,” said Flamingo gm Allie Melnick. “The shaving aisle for women has not been touched in decades. It’s not typically a place she goes to discover something new, so we wanted to bring something disruptive and innovative to her.”

Harry’s, along with Dollar Shave Club, which launched in 2011 and was acquired by Unilever for $1 billion in 2016, upended the men’s shaving space. According to Euromonitor, Harry’s held 2 percent of the $2.8 billion men’s shaving market in 2017, while Dollar Shave Club held 8 percent. For its part, Procter & Gamble’s Gillette saw its share slide from 70 percent a decade ago to below 50 percent in 2017. The women’s hair removal opportunity has been slower to take shape, though it’s a $1.4 billion market in the U.S. The top-selling women’s brands are Procter & Gamble’s Gillette Venus and Edgewell Personal Care’s Schick. Razor brands Angel Shave Club and Billie, both made for and marketed to women, debuted in 2016 and 2017, respectively. Both rely on their direct-to-consumer sites and subscriptions for reoccurring revenue and have no third-party partners.

To make its presence known, Flamingo launched at Target with four feet of dedicated space in the shaving aisle, as well as a custom end-cap display to draw women in. Additionally, Flamingo will be merchandising its razors and other shaving products alongside its wax kits. No other brand Target carries currently does that. Gilette’s Venus products and Schick’s assortment of razors sit squarely in the shaving department, while Sally Hansen’s wax strips are front-and-center in waxing.

“We want to have an open conversation about body hair and bring these categories out of the shadows in the retail space together,” said Melnick. “We know that 70 percent of women use more than one hair removal tool, so it was about having our whole portfolio live as it would online.”

Flamingo’s wax strips have been a boon for the brand. Fifty percent of Flamingo customers bought its wax strips in the first 72 hours of launch (the inventory was supposed to last six weeks). Its face wax kit is the brand’s No. 2 bestseller after its shave set, which includes a razor, an extra blade, lotion and shave gel.

Though Flamingo will not be directing customers back to ShopFlamingo.com, as other digital-first brands, such as Quip, have done at Target, Flamingo will be activating on Target’s Target Style social channels to speak to the retailer’s female shopper. (On Instagram, the account has 2.1 million followers, whereas Flamingo has just over 20,000 followers.)

“We want to take our learnings and the way we talk to the customer into Target’s environment,” said Melnick. “It’s about being clean and clear; we think there is a lot of opportunity to simplify what is out there for women and arm her with the education of how to shave or wax in a way she wants to.”